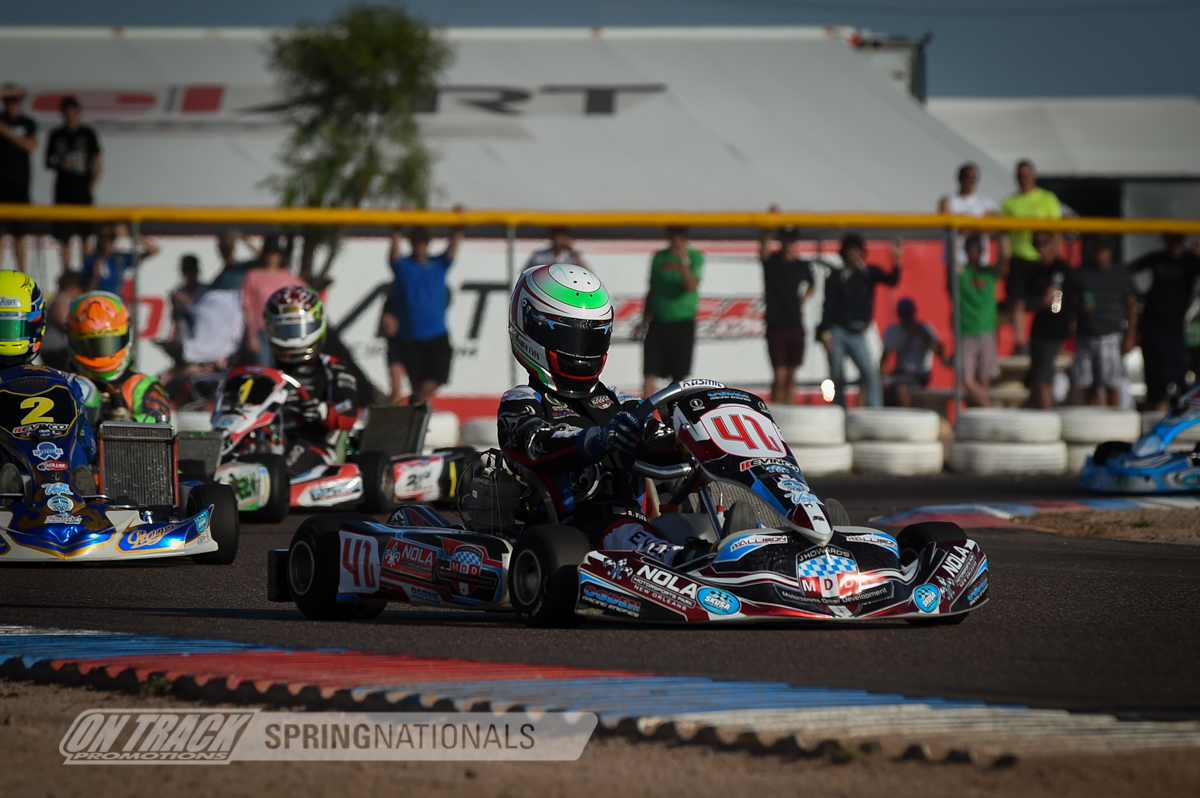 After another warm day in the Phoenix desert, the 2016 Superkarts! USA Pro Tour is off and running with new winners, exciting stories, and loads of momentum.  The first two races of this five-race national championship program are now in the books and SKUSA enjoyed the opportunity to celebrate 16 different winners in eight classes during the second day of the seventh annual SpringNationals, as there weren’t any repeat victors on Sunday.  The level of competition has rose to a new level, following the trend of the overall entry numbers, hitting record heights.  Winning in this program carries significant weight, and the breakthrough victories of pilots like Braden Eves (X30 Senior), Alan Michel (S4 Master), Dante Yu (X30 Junior) and Hunter Kelly (S2) have turned things upside down. Veterans rose to the occasion as well, as former Pro Tour champ Daniel Bray handled the day to score the S1 win, Jamie Sieracki was flawless in second X30 Master race, and Nick Firestone posted his first S4 Super Master victory. The young drivers in the program also impressed, with British talent Brandon Carr winning in Micro Swift while Tyler Maxson made a veteran-like last lap overtaking maneuver in Mini Swift to steal the win.  In a simple statement, the competition in this year’s Pro Tour is stout. 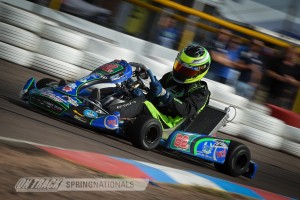 It was thought to be another sweep in the making for Florida driver Ryan Norberg in the Nash Motorsports / CRG Nordam X30 Senior. The Orlando Kart Center / Tony Kart driver was quickest in qualifying, and held off challenging through the two heat races from Braden Eves and Brandon Lemke. The fight continued on in the main event, with more players coming into the mix, and early. Eves jumped out into the lead with Norberg right there in second. The two went back and forth, with Zach Holden and Matteo Vigano. On lap three, fighting for position in the tricky kink in the middle of the long back straight equated into contact of Vigano (Top Kart USA) and Norberg. The two went deep off the track, and the two saw their race end just like that. Eves continued to lead with Holden (Koene USA / Tony Kart) now the top challenger. Just as he took over the lead the following lap into the hairpin, his engine shut off thanks to a broken coil wire. This left Eves (MDD / Kosmic) once again out front, now under attack from 2014 SKUSA Pro Tour champion Jake Craig (Praga North America). Their pace was very similar, as Craig could not close up enough to make anything happen, leaving Eves alone as he lead all 16-laps at the strip to claim his first SKUSA Pro Tour victory. Last year’s Junior champion Brandon Lemke (Franklin Motorsports / Merlin) took third with Phillipe Denes (Birel ART) fourth and defending champion Louie Pagano (2Wild Karting / Tony Kart) improving all weekend long to end in the fifth position.

Former champion Daniel Bray (GP VCI Mexico) had not won at the SKUSA Pro Tour since 2013 in the PSL Karting S1 Pro Stock Moto category. Bray set the pace in qualifying with a 44.444-lap time before going on to win Heat #1 over SuperNationals winner Daniel Formal (DRT Racing / DR Kart). Formal was able to work around Bray for the lead and the win in Heat #2. The start of the main event saw contact with Formal and Luca Tilloca (GP VCI Mexico) after Bray grabbed the holeshot. Tilloca spun sideways in the opening corner hairpin, luckily with the rest of the field able to avoid him. Up front, Bray established himself as the leader, and led all 16 laps for the victory. Formal settled for second with Jake French (Dallas Karting Complex / SodiKart) charging from a Heat #1 DNF to the third step on the podium. Saturday winner Billy Musgrave (MRC / Praga) and Kolton Griffin (Pure Karting / Tony Kart) completed the top-five. 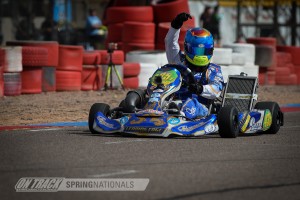 Hunter Kelly took the S2 victory with a holeshot win

The ‘young guns’ played a major role in the outcome of the Master divisions on Sunday. Veteran driver John Crow (MRC / Praga) showed the way through Parolin Racing Kart X30 Master qualifying and the two heat races, setting the pace in all three on-track sessions. During that time, Merlin Nation leader Jamie Sieracki (Franklin Motorsport / Merlin) closed up and starting P2 for the main event. The Wisconsin driver got the jump when the lights went out for the main event, and paced the field. Lap after lap, the top-five kept it close with defending champion Nick Tucker (Rolison Performance Group / Tony Kart) right there. On the final lap Tucker tried to put his nose inside, but Sieracki held strong and fought off the challenge. At the line, it was a Merlin Nation victory for Sieracki in his Master debut. Tucker dropped after climbing the bumper of Sieracki, allowing Jim Russell Jr. to move up into the second position. Replacing Scott Falcone after an incident on Saturday, the SuperNationals winner came from last on the grid for Heat #1 to end up runner-up after not hitting the track until Sunday morning. Derek Wang (BBR Karting / FA Kart) slid though for the final step on the podium over Tucker with Crow falling back to fifth. 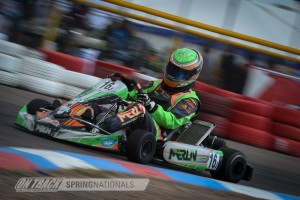 Sunday was a solid day for local driver and former S4 front runner Nick Firestone, sweeping the second round of the Ruthless Karting S4 Super Master division. Missing out on the victory on Saturday, the DRT Racing / DR Kart driver drove to a 3.5-second advantage in the main event for his first Pro Tour victory. Rod Clinard (CRG) drove to second with Saturday winner Robert Marks (CRG) placing third. 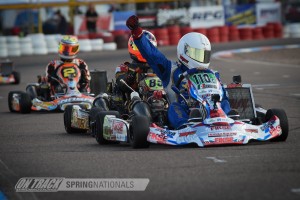 History was made in the Ryan Perry Motorsport X30 Junior division as Dante Yu secured his first Pro Tour victory along with the first for the CompKart chassis. Top qualifier Nicholas d’Orlando (Koene USA / Tony Kart) was never a factor with British driver and SuperNationals TaG Cadet 2015 winner Jonny Edgar (Kosmic) winning both heat races. The second moto saw Yu closing in and challenge Edgar late in the race. Edgar was hounded by Yu and Jagger Jones (Ryan Perry Motorsport / Tony Kart) early on, with Jones taking over the point on lap five. He led the next five circuits until Yu secured the top spot with three laps remaining. The SoCal driver held on through the remaining laps, pulling out to nearly a one-second advantage at the checkered flag. Jones settled for second over Edgar with Oliver Calvo (PKS / Top Kart) in fourth and Zoey Edenholm (Koene USA / Tony Kart) in fifth.

It was a wild one throughout the day in the Top Kart USA Mini Swift as Georgia driver Tyler Maxson was able to escape with this first ever SKUSA Pro Tour win. Franklin Motorsports / Merlin driver Kyle Thome came through in the final seconds to earn the fast lap honors in the qualifying session. Maxson came through with a last lap pass to secure the win the opening heat race. Thome responed with this own late race maneuver to secure the win in Heat #2. That was followed by another late run, securing the lead on the final lap of the main event, crossing the line first by over a tenth of a second over Thome with Diego LaRoque (Benik) in third. Enrico de Lucca (Benik) was fourth with Devin Gomez (Benik) in fifth.

Saturday was all Oliver Denny (Benik) in the Benik Kart Micro Swift division while Sunday was his fellow Great Britian’s Brandon Carr (Benik). Denny set the pace in qualifying while the top two broke away from the field in every race session. Carr took the opening heat while Denny secured the win in Heat #2. They both pulled away again in the main event, with Carr beating Denny to the line by 85 thousandths of a second. Frankie Mossman (Benik) took the third position over Eli Trull (Fullerton) with Kai Sorensen (Praga) coming from the tail of the field to fifth.