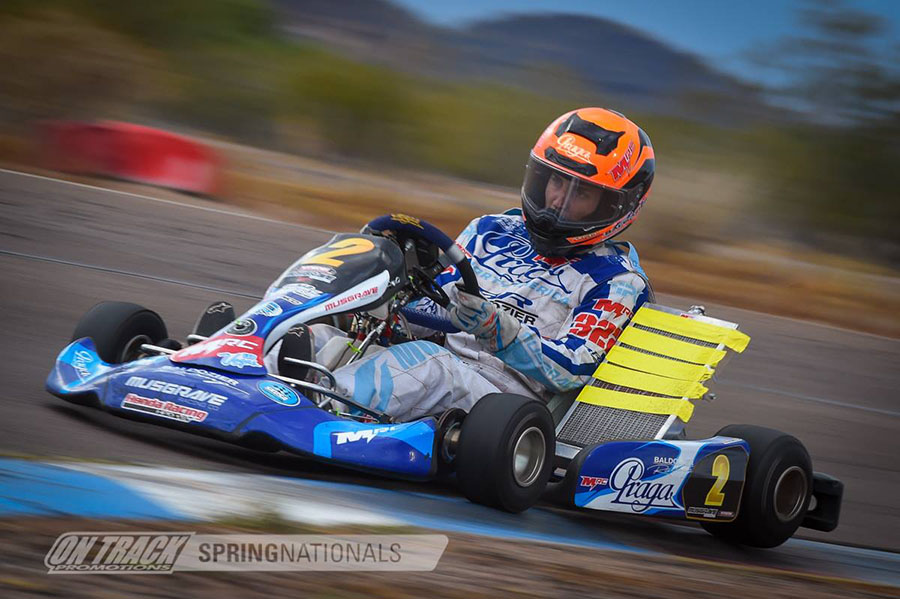 It was the start to a new SKUSA Pro Tour season, and it had it all.  The first day of action at the seventh annual SpringNationals was a roller coaster ride of emotion, and weather forecasts as well. The paddock was packed, and the excitement and tension were palpable. The expectations of a typical hot and dry Phoenix day were eventually turned upside down by wind and rain, and were then made incredibly exciting by a journey from Evinco slicks to MG rains and, for the gambling few in S1, back to Evincos for a run to victory.  Light sprinkles at the start of the mains made way for a period of hard rain in the middle of the X30 Master final, which pushed the drivers to adapt.  And truly, the ability to ‘adapt’ was the theme for the day.  A new track layout may have introduced limited overtaking opportunities, and blowing wind and sand may have decreased grip levels, but the level of competition was as record-breaking as the entry numbers, as the entire field both X30 Senior and X30 Junior qualifying were separated by less than a second.

The day got off to a rough start during morning warm-up, when an incident during the S2 session sent a SKUSA official and a driver to the hospital.  Thankfully, the midday updates that we received indicated that both are in stable condition.  The EKN staff would like to extend our best wishes to both Scott and Kyle. 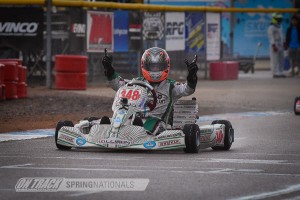 There was no way to script the action in the PSL Karting S1 Pro Stock Moto during the opening round of the SKUSA Pro Tour. A solid field of 18-drivers started the day believing they had a chance to score the victory, but in the end the gamble for Billy Musgrave paid off. The return of Oliver Askew (PSL Karting / Birel ART) was highlighted with fast lap in qualifying. 2011 champion Daniel Bray (GP) gave him a challenge in Heat #1, until a small error opened up the door for Askew to retake the lead and score the win. A holeshot win went to Jake French as the Dallas Karting Complex / SodiKart driver led all eight laps of the second heat. The weather conditions cleared up just enough before the main event, with a select few taking a chance on slick Evinco tires instead of the treaded MG wets. French and Kolton Griffin (Pure Karting / Tony Kart) paced the field through the opening laps until a firm dry line was formed. The dry tire performance began to increase, and the wet weather tires quickly began to drop off. Musgrave spun during the opening lap in the turn four hairpin, but continued on. It was nearly a three-second advantage for the dry tires after two laps, with Musgrave on his way forward. At lap five, Musgrave passed French and Griffin for the lead. Behind him came a quick Joey Wimsett, with the Phil Giebler Racing / Ricciardo Kart driver starting dead last and on slicks. Wimsett closed the gap, just unable to get around with Musgrave scoring his second career SKUSA Pro Tour victory. Cambrian Go-Karts / Birel ART driver Nic LeDuc also played poker, climbing up to the podium on his slick Evinco tires. French held on to the fourth position with Checkered Motorsports’ Robert Bujdoso (PCR) stealing fifth on the final lap with an outside maneuver around Askew.

Round One was a perfect day for Florida driver Ryan Norberg. Beginning his second season in the Senior ranks, the Orlando Kart Center / Tony Kart driver swept the day in Nash Motorsports / CRG Nordam X30 Senior, performing at his best in dry conditions and wet weather. Norberg bested his fellow Floridian Kyle Kirkwood (PSL Karting / Birel ART) in qualifying, and fought off 2010 SuperNationals winner Andre Nicastro (NF Sports / Italkart). Heat #2 was a wire-to-wire win with Kirkwood right back up to the second spot. The rains came for the main event, and Norberg continued his run at the front. Not before Braden Eves took his turn at the point. Starting fourth, the MDD / Kosmic pilot led the first seven laps until Norberg returned to the point. He led the remainder of the race for his first ever SKUSA Pro Tour victory. Senior rookie Zach Holden (Koene USA / Tony Kart) had his best performance of the day, posting fast laps of the race to climb up to the second position with Kirkwood in third. Luke Selliken (Rolison Performance Group / Kosmic) and Alfred Gagliardi (PSL Karting / Birel ART) completed the top-five. 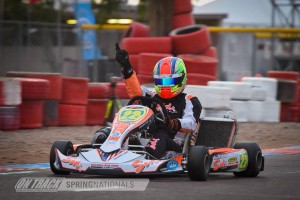 It was a big win for Texas driver Austin Wilkins in the 3G Kart Racing S2 Semi-Pro Stock Moto category. The Dallas Karting Complex / SodiKart USA driver fought his way forward throughout the day to end up earning his first SKUSA Pro Tour victory. The top qualifier was a shock, as Sting Ray Robb (CRG) earned the fast time honor in his S2 debut. In only his second weekend in a shifterkart, Robb started P1 for the opening heat, but stalled on the line. One of the back markers was unable to pass him sitting on the grid, making hard contact. Thankfully, everyone was ok. This allowed Kyle Wick (Rolison Performance Group / Kosmic) the lead, going on to lead all eight laps. He duplicated that in the Heat #2, scoring the pole position for the main event. The start of the main event saw a number of wind gusts and dirt devils sweeping across the track as the grid sat waiting for the lights to go out. Holeshot went to Wilkins, pushing his SodiKart to the point. Austin established a sizable lead to lead all 12 laps for the victory. Kyle Kalish advance himself up to second after early fighting opened up the spot, putting the Franklin Motorsports / Merlin driver on the podium in his first 2016 start. The battle went down to the wire for P3, with Champion Racing’s Harry Gottsacker (Intrepid) holding off Wick for the position. The driver on the charge was Robb, coming back from a DNF in Heat #2 with the hard charger honor and fast lap of the race to place fifth on the final circuit.

Rain was the deciding factor in the outcome of the Rolison Performance Group S4 Master Stock Moto division. Local driver Alan Michel (Praga) dominated the day through qualifying and the two heat races during dry conditions. Wet weather struck for the main event, and Michel dropped off, and former champion Jordon Musser (3G Kart Racing / Intrepid) took advantage. Michel led the first four laps before Musser took control. From there, the Texan led the remainder of the 12-lap event for his first victory aboard an Intrepid since 2009. Champion Racing’s Ryan Kinnear moved up to second, making it an Intrepid 1-2 for Round One. Darren Elliott (Nash Motorsportz / CRG) climbed up to third, pushing Michel back to fourth with 2014 Pro Tour champion Gian Cavaciuti (GP) in fifth. 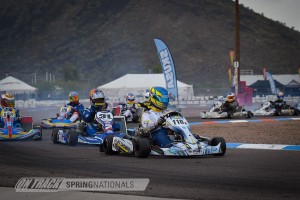 The inaugural winner of the Ruthless Karting S4 Super Master division on the SKUSA Pro Tour was Robert Marks. The Team PKS / Visalia pilot set the pace in the new category, until local driver Nick Firestone (DRT Racing / DR Kart) won Heat #2. Firestone led for much of the main event until the final lap when Firestone made contact with another driver, giving Marks the opening to take back the lead and score the win. Firestone settled for second with Darrell Tunnell (Team PKS / Visalia) in third aboard his CRG.

When the racing began in the Parolin Racing Kart X30 Master division, Eduardo Dieter became the driver to beat. The NF Sports / Italkart driver came out of both heat races with the wins after Derek Wang (BBR Karting / FA Kart) set fast time in qualifying. Weather made its turn during their main event along with a full course caution after Scott Falcone (Parolin) flipped just before the halfway mark. The rain fell heavier, with Dieter and Wang at the front after the race resumed. Dieter was able to hold off the advancements of Wang, scoring the victory. John Crow (MRC / Praga) held on for third ahead of Erik Jackson (MMK) and Jason Vince (Arrow).

The day looked to belong to Jagger Jones in the Ryan Perry Motorsport X30 Junior division after coming away with the top position in qualifying and the two heat races. Jones (Ryan Perry Motorsport / Tony Kart) led early on in the main event as the sprinkles began to fall. Stalked by last year’s SuperNationals TaG Cadet winner Jonny Edgar (Kosmic) all day, the two made contact on lap six. This opened the door for Lance Fenderson (Verde Speed Resources / Tony Kart) to slide through for the lead. Officials called the race early due to surrounding thunderstorms, throwing the checkered flag earlier on lap eight, giving Fenderson his first Pro Tour victory. Oliver Calvo (PKS / Top Kart) was second with Tomas Mejia (PKS / Tony Kart) in third. Franklin Motorsports’ Alex Bertagnoli (Merlin) was credited with fourth with his teammate Sam Mayer into fifth. 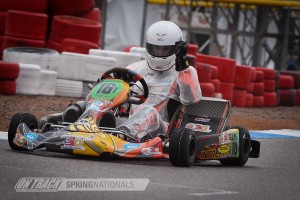 The Top Kart USA Mini Swift class was swept by Phoenix driver Diego LaRoque. The Benik Kart pilot swept the opening round, able to hold off the sold-out field through the dry weather and wet conditions. LaRoque beat out Jace Jones (Benik) to the checkered flag in the eight-lap main event. Kyle Thome (Merlin) worked past Jak Crawford (Energy) on the final lap for the third podium position with Devin Gomez (Benik) in fifth.

British driver Oliver Denny dominated the Benik Kart Micro Swift category, both in the dry and the wet. Denny (Benik) secured the fast time in qualifying and won both heat races by a sizable margin. In the wet, Denny drove to a five-second advantage in the eight-lap race to become the inaugural Micro Swift on the SKUSA Pro Tour. Kai Sorensen (Praga) held off Brandon Carr (Benik) for the second spot with Frankie Mossman (Benik) and Cooper Hicks (Tony Kart) working past Caleb Gafrarar (Parolin) late race.