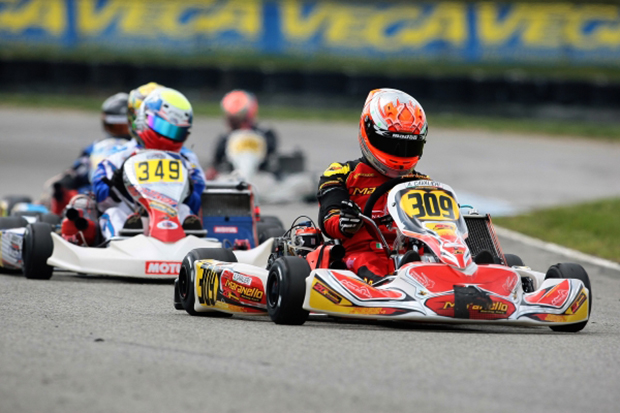 Alberto Cavalieri and Team Officina del Kart secured the first points in the opener of the KZ2 European Championship thanks to two good comeback races in Prefinal and Final worth a good P14.

Maranello Kart and Alberto Cavalieri had a positive debut in the KZ2 European Championship in Essay (France) at the circuit d’Aunay-Les-Bois in Lower Normandy. The weekend has been characterized by very instable weather conditions, but this did not prevent the Italian to score a series of strong results earning a more than positive 14th place and the first 4 points valid for the Championship with it.

Cavalieri – at his first experience on the French track – started the weekend of Essay with the 31st time in qualifying, being 9 tenths off the pole position on the Maranello chassis powered by Modena Engines run by Team Officina del Kart. Cavalieri put in a bold recovery in the heats scoring a series of placings around P10. He completed his masterpiece in the Prefinal tough, when he was forced to slip down to the last position to avoid an incident in the initial stages of the race. The recovery all the way to P17 allowed him to qualify for the Final where, despite starting from the last spot of the grid, he obtained a positive 14th place.

“Things got messed up a bit in Prefinal – conceded Cavalieri – as after a good getaway that allowed me climb up to the sixth place, I had to go wide on the grass to avoid an incident, which forced me to put in a strong recovery. Fortunately I managed to close 17th, which was the final position granting a place among the finalists. I started the Final from the last position and from P34 I managed to climb up to 14th. Despite this being my first experience on the circuit of Essay, I always had a good pace. I have been struggling a bit to manage tyres, that had an high rate of degradation due to the particularly abrasive surface. We managed to find a good setup anyway and in the end I am happy for the speed we had. We did not suffer any technical issue and this is very important. I would like to thank Maranello Kart and Modena Engines, Andrea Persia and Ivan Mariani for the technical support, SRP for the engine and Massimo Susio for the chassis. Following this first experience, I am positive we can get good results in the remainder of the European Championship.”

The next rounds of the KZ2 European Championship: