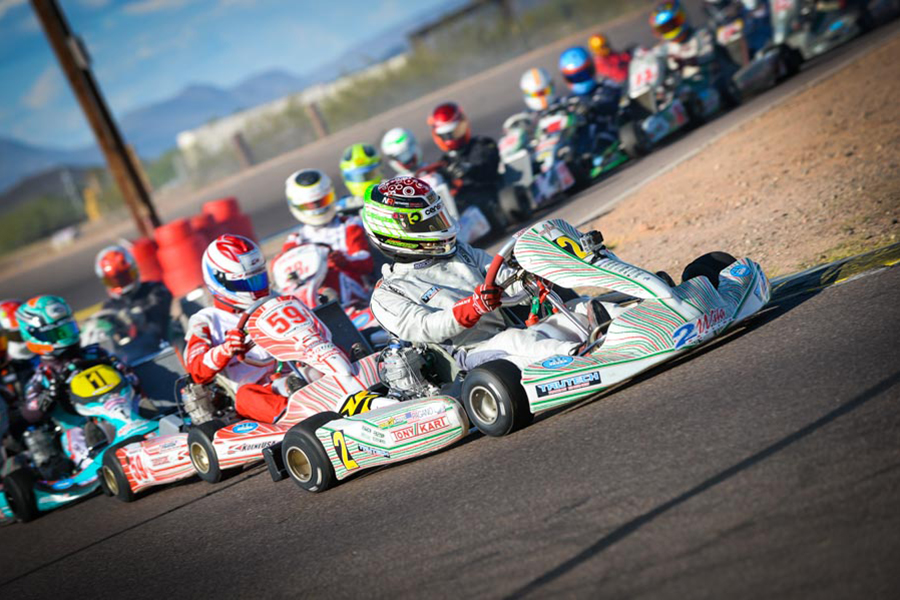 The headline divisions of S1 and X30 Senior feature some of the top drivers in North America, and welcoming a select few from around the world. 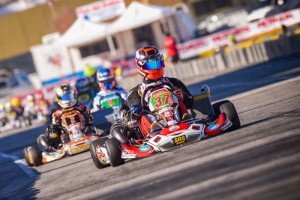 Danny Formal led throughout the SuperNationals to victory, and looks to continue the streak at the SpringNationals in S1 (Photo: On Track Promotions – otp.ca)

Names like Leesmann, Lennox and Dreezen have dominated the S1 division over the past few years. Those familiar faces will be missing in Phoenix when the SKUSA Pro Tour opens up for the S1 division, the headline shifterkart category. Belgian driver Rick Dreezen will not defend his 2015 crown, opening up the door for some new faces and returning challengers for a chance to compete for the crown through PKRA, New Castle and the SuperNationals. It is a diverse field featuring 12 different chassis brands of the 17 drivers entered.

One driver who continues to help his cause on becoming a longtime star of SKUSA competition is Billy Musgrave. The 2015 vice-champion finished the season as the top driver in the EKN Stock Moto Driver Rankings with his best year of results since moving to S1 in 2013. Two podiums and one victory highlighted the five-race top-five streak for the Musgrave Racing Company / Praga driver. Musgrave currently leads the California ProKart Challenge standings with one win and two runner-up finishes.

A trio of drivers from Florida are making a push toward the S1 championship this season. Danny Formal stole the show at the SuperNationals, earning a perfect score aboard his DRT Racing / DR Kart for his first victory at Vegas. The now Costa Rican resident is returning back to the United States, looking to keep that winning streak going in Phoenix. Familiar foes of his – Oliver Askew and Nick Neri – are making the return to S1 category after a year away. The two were teammates under the Ocala Gran Prix banner in 2013, with Neri finishing third and Askew fourth in their first full season in S1. Neri is now part of the famous Champion Racing operation, piloting the Intrepid brand, and coming off victory last weekend in his debut at the US Open. Askew moved to PSL Karting last season, finishing third in the TaG Senior SKUSA Pro Tour standings. Back into S1, all three are contenders off the trailer.

Two former SKUSA Pro Tour champions are in the field at Phoenix. 2011 title winner Daniel Bray has continued to call the United States his second home, competing in the SKUSA events since the inaugural event in Sonoma. Bray is returning from New Zealand with the GP VCI Mexico operation. 2013 champ Joey Wimsett was the first driver to earn the $10,000 bonus for a SKUSA Pro Tour racer winning the SuperNationals. Lennox was the other S1 driver to win the $10k in 2014. Wimsett joined the Phil Giebler Racing operation at the SuperNationals last November, set to make his SpringNationals debut aboard the Ricciardo chassis.

The only driver carrying the #1 plate in S1 is the 2015 S2 champion Carter Williams. The Phil Giebler Racing pilot secured the series championship, and is making the jump up the SKUSA Stock Moto ladder. The Ricciardo driver is also jumping into open wheel racing this season, making 2016 a very busy schedule for the California driver.

International drivers have dominated the championship the past two seasons. In Phoenix, two notable drivers from Italy will contest the S1 category for the first time. Riccardo Negro is a former WSK Euro Champion, joining the VemmeKart team at PKRA for his S1 debut. Luca Tilloca finished fifth in the KZ2 main event at the SuperNationals last year, rejoining GP VCI Mexico for his first ever S1 race.

Jake French and Kolton Griffin will continue their fight from this winter at the inaugural Challenge of the Americas Shifterkart category debut. French won the battle, winning four of the six races to earn his first championship with SodiKart USA. Griffin, who finished sixth in last year’s S1 title chase in his rookie campaign, will be right there this weekend. The Pure Karting / Tony Kart driver calls PKRA home and should be a podium contender. 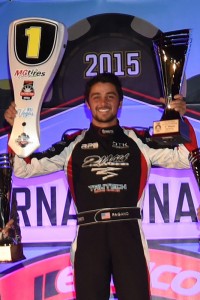 This season in the X30 Senior division is going to be one of survival, consistency and the right strategy to come away from the 20th annual SuperNationals as the SKUSA Pro Tour champion. The entry list for this weekend’s SpringNationals has surpassed the 40-driver mark, with the same expected for the SummerNationals at New Castle, and the always sold-out 88 drivers for the SuperNationals field in Las Vegas. Talent is scattered throughout the entry list, that includes 18 of the Top-50 pilots in the EKN TaG Driver Rankings. Four former SKUSA champions, including the last two in the category, and three former SuperNationals winners – not to mention the many series champions and winners from other programs throughout North America.

The driver everyone is measuring up to is defending champion Louie Pagano. For two straight years, Pagano earned the vice-champion position on the SKUSA Pro Tour. Last year, he put himself in contention with the opening round win in his debut with 2Wild Karting / Tony Kart. Five drivers had a shot at the title entering the SuperNationals, and Pagano did what he needed to do, scoring an emotional victory to claim the $10,000 Pro Tour bonus and his first series championship. Now among the elder drivers of the category, Pagano will shake off the rust having not competed since that November SuperSunday for his first weekend of defending the crown and carrying the SKUSA #1 plate.

In 2014, Jake Craig shined throughout the season as the top driver in nearly every program across North America. He would come up just short in 2015 of defending his title, placing runner-up in the standings. Now, he takes the SKUSA #2 plate over to Praga North America to compete with his third different team in three years. Craig has been successful in the previous two stops, and hoping for the same with his Praga team.

Pitted alongside him is the current EKN TaG Driver Rankings #1 driver Brandon Jarsocrak. The 2015 USPKS vice-champion entered the SuperNationals as the point leader this past November, but came up short during the Las Vegas week. He has since gone from privateer to one of the lead drivers at KartSport North America. The Pennsylvania driver won in his Praga debut at WKA Daytona KartWeek, and continues to have his dad Eddie turning the wrenches like they have throughout his career.

The driver with momentum going into the event is Challenge of the Americas champion Christian Brooks. The 15-year-old is entering his second season in the Senior ranks, finishing fifth in the Pro Tour standings with two fifth-place finishes as his best, including one at the SuperNationals. Brooks remains with the Nash Motorsportz operation, but has been piloting a CRG all winter, earning four victories at the COTA program and one at the California ProKart Challenge – where he earned the series championship a year ago.

On the East coast, Ryan Norberg has been racking up the wins and podium finishes over the last four months. The Orlando Kart Center / Tony Kart driver was vice-champion at the Florida Winter Tour Rok program, and is coming off two wins at the WKA Manufacturers Cup Series at GoPro Motorplex against many of the same competitors who will be in Phoenix.

One of them was United States Pro Kart Series champion Elliot Finlayson. The Koene USA / Tony Kart driver is set to defend his crown in that series, and repeat a podium finish he earned a year ago in Phoenix at the SpringNats. The Illinois driver is #3 in the EKN TaG Driver Rankings, looking to improve his position after this weekend.

Kyle Kirkwood and Andre Nicastro are two former SuperNationals winners entered in the field. Kirkwood earned his SuperNats victory in S5 Junior (2013), and since moving to the Senior ranks, continued to rack up more wins and championships. He is the two-time defending champion at the Florida Winter Tour in both Rok and Rotax competition, and the 2015 US Rotax Grand Nationals winner. All of that was done with the Ocala Gran Prix operation, as the Florida driver now moves over to the PSL Karting tent aboard a Birel ART machine for the first time this weekend. Nicastro won the 2010 SuperNationals in a photo finish ahead of multi-time Aussie champion David Sera. The Brazilian – driving a NF Sports / Italkart entry – is always among the quickest and most aggressive drivers in the field, and holds the honor of being the second oldest in the category next to Matt Johnson.

Luke Selliken won the SKUSA Pro Tour TaG Junior championship in 2012, bolting him onto the national scene among the top young talents. He was unable to defend the crown the following year, and focused on stock car racing the last two years. Reunited with the Rolison Performance Group stable, Selliken could navigate his Kosmic machine toward the front. The Oregon driver already has numerous wins at the PKRA facility in the past.

A good roster of rookies have graduated to the Senior ranks this season, none more watched and decorated than Brandon Lemke. The 2015 SKUSA Pro Tour TaG Junior champion will carry the blue SKUSA #1 plate, recognizing him as the top rookie contender. The Franklin Motorsports / Merlin driver has already started his Senior season off on the positive side, earning the WKA Winter Cup championship. Other top young drivers include his longtime rival Zach Holden (Koene USA / Tony Kart), 2015 California ProKart Challenge TaG Junior champion Nicky Hays (Phil Giebler Racing / Ricciardo Kart), and Canadian Kellen Ritter (Rolison Performance Group / Kosmic) – who showed well this winter at the Challenge of the Americas.