CRG, Camponeschi, and Federer on the Podium at the European Championship in Essay 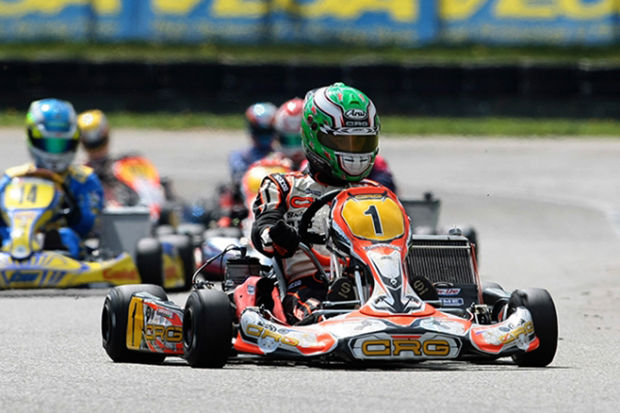 Flavio Camponeschi took a good second place in KZ at the end of a great comeback race, Paolo De Conto also put in a good performance. Fabian Federer second and on the podium in KZ2.

Flavio Camponeschi obtained a spectacular second place in Essay (France) on CRG-Iame at the first round of the KZ European Championship thanks to a great comeback race. He managed in fact to forcefully turn the fifth place in Prefinal into a second place at the penultimate lap of the Final.

The 2015 European Champion Flavio Camponeschi is confirming his place among the most competitive drivers in his first season among the fields of CRG. The Italian run a good race in the first round of the KZ European Championship in France at Essay. Following an unlucky opening in qualifying where he was 21st, he started getting some ground back in the heats ending 14th. In Prefinal he gained the fifth place before keeping his momentum in the Final as he took the second place, thanks to a strong, but fair, attack on Iglesias when two laps were left to go.

This good run made Camponeschi start the European 2016 campaign on a high with CRG as he now holds the third place of the classification. The Italian is now 16 points shy of Final winner Ardigò, and 5 points short of Iglesias.

Paolo De Conto has also been among the most competitive drives on CRG-Maxter. He was a strong protagonist of qualifying as he secured the third time, and then in the heats when he was second. In Prefinal, he took a good third place, but some problems in the Final affected his performance after a few laps, making him lose some positions before ending his effort in ninth place.

Simo Puhakka ended his race in the top ten after a troubled start in qualifying and in the heats. Puhakka managed to recover very well in the Final ending tenth though. Regarding CRG drivers in KZ, Jorrit Pex of CRG Holland was seventh, Andrea Dalè 17th, while Macau’s driver Andy Chang and the French Julien Deharte had to retire.

CRG AND FEDERER ON THE KZ2 PODIUM

Fabian Federer obtained a good result in KZ2 on CRG-Modena run by team SRP. Federer has always been among the quickest throughout the weekend and was only penalized by a retirement in one heat after two wins and the fourth place in qualifying. Following the second place in Prefinal, Federer claimed the second place in the Final at the end of a good series of duels behind the winner Luca Corberi. Stan Pex of CRG Holland was also among the absolute quickest. He was third in qualifying, won heats and his Prefinal. Stan Pex took an early lead of the Final, then slipped down to third keeping a good race pace, but eventually had to settle for P5.

CRG Keijzer Racing’s Dylan Davies had a great start of the weekend with the second absolute time posted in qualifying, but in the Final he was 19th. The Swede Benjamin Tornqvist was 17th instead. The Spanish driver of Renda Motorsport Enrico Prosperi had to retire, while the American Sting Ray Robb, the Japanese Fuma Horio and Fabrizio Rosati could not qualify for the final stages.

Stan Pex is now third in the KZ2 European Championship, 11 points short of Luca Corberi, while Fabian Federer is fifth 13 points shy of the top.

The next rounds of the European KZ and KZ2 Championship: