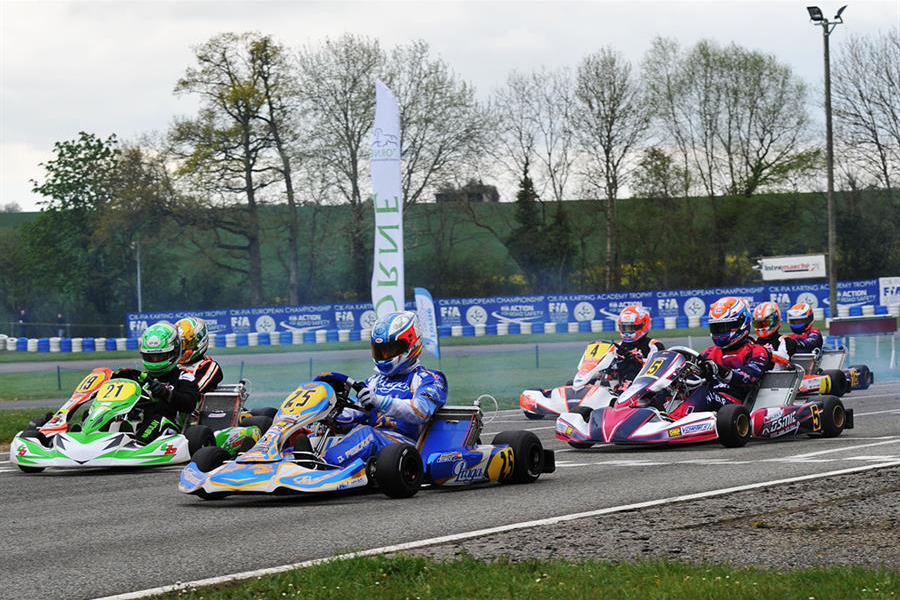 There could not be a better start for the European CIK-FIA KZ and KZ2 Championship. The event, hosted by the facility in Essay, France, enjoys the presence of a great number hard-fighting drivers, as proved by the outcome of the qualifying heats: the eleven races, which took place in the afternoon, gave young and emerging drivers the opportunity to make themselves conspicuous, although they raced against the big names of karting. There are drivers coming from 46 different countries on the circuit set in Lower Normandy, which is the venue of the first championship of the 2016 calendar, together with the CIK-FIA Karting Academy Trophy. Tomorrow’s final phase, which will put an end to the battles begun today in the heats, is going to be absolutely unmissable. Fans will be able to follow it on cikfia.tv and cikfiachampionship.com; then, next week, the special TV report on Motors TV.

In KZ, Jorge Pescador is at the top

He seemed to be in top shape since qualifying this morning and then, in the heats, he confirmed the impression: Jorge Pescador (Praga-Parilla-Vega) set the best time and secured the Pre-final pole position thanks to two victories in the heats. Second slot on the starting grid for the Italian Paolo De Conto (CRG-Maxter-Vega), who scored two third places. After today’s results, the Pre-final is going to be unpredictable: the second row, in fact, will be occupied by two top drivers such as the French Jeremy Iglesias (Sodi-TM-Vega) and the Italian Marco Ardigò (Tony Kart-Vortex-Vega): they scored a second position each and are eager to attack the leaders in the final phase.

Pex’s puts in the best performance in KZ2

His start was flawless and that helped him to reach the top of the ranking of the KZ2 heats: Stan Pex (CRG-Vortex-Vega) scored three victories, and the Dutch driver will be the pole-sitter in tomorrow’s Pre-final 1. However, Leonardo Lorandi (Tony Kart-Vortex-Vega) is going to be a tough opponent: he won once and was always in the first three positions. The Italian driver will fill the first slot on the starting grid of Pre-final 2. Interesting performance also for the French Paolo Besancenez and the Italian Luca Corberi (both on Tony Kart-Vortex-Vega): they will start from the front row of Pre-final 1 and 2 respectively.

Bradshaw attacks in the Academy Trophy

Among the 50 drivers in the single make series, racing on Exprit chassis powered by Vortex, the British Callum Bradshaw is the frontrunner. Bradshaw won twice today, while the third heat was won by the Swedish Alfred Nilsson. The two drivers will fill the two first slots on the starting grid of the Pre-final, with the Brit in pole position. Second row for the French Thomas Mialane and the English Oliver Clarke.