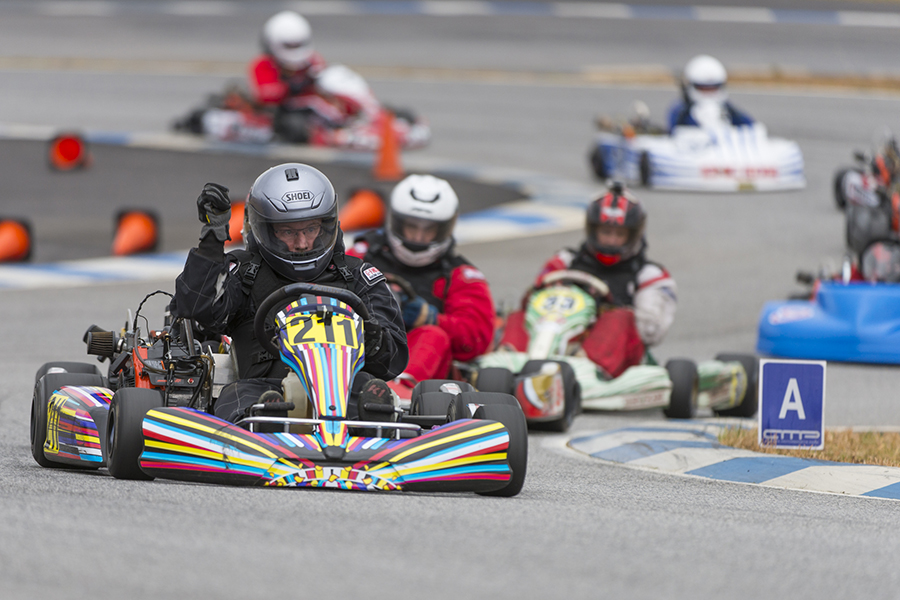 Clear skies and seventy degree weather greeted racers for the opening round of the 2016 AMP Kart Championship Series in a near-record setting turnout. Extending the schedule from 2015, the 2016 season would see an additional race added to the calendar in October bringing the series from six events to seven. From ninety mile per hour shifter karts to the ever-exciting Briggs LO206 class, every session on-track was a show to watch.

After having issues in qualifying causing him to start deep in the pack, Bryce Sanders (Maverick / IAME) proved to be the class of the field in the TaG Rookie division. Working his way to the lead in the early laps of the Pre Final, Sanders never looked back. Sanders went on to a commanding win in the Final while the battle raged on for second place behind him. Christian Foster (Birel / Rotax) and Lennox Roock (DR / IAME) traded the runner up spot back and forth on the final circuit, with Foster coming out on top and Lennox settling for third.

Just as with Sanders’s domination in TaG Rookie, Raiden Nicol (Tony Kart / IAME) set the pace in TaG Cadet over newcomer Nicholas Daniell (OK1 / IAME). Nicol led every lap of every session on track and took the main event win with a flag-to-flag showing with Daniell finishing second.

In only his second visit to Atlanta Motorsports Park, South Carolina’s Tyler Klein (Tony Kart / Rotax) took the fast time in qualifying in TaG Junior. Baptiste Viala (FA Kart / IAME) qualified second and was glued to Klein’s bumper all day long, but he was unable to make a move for the lead stick. Klein was able to take a close victory in the class over Viala, both ending within a second of each other after fifteen laps.

AMP veteran Sammy Tiger (CRG / IAME) headlined the TaG Senior class, taking the pole position in qualifying. Todd Shambo (Arrow / IAME) looked to challenge based off his speed in practice, but Shambo was forced to retire early in the day due to mechanical issues. This surrendered the top spot to Tiger, who put on a clinic in the Final with a ten second margin of victory. Brian Katz (Tony Kart / IAME) was able to hold off hard-charging Donald Davis (Arrow / Rotax) for second, with Davis rounding out the podium.

Nine karts lined the grid for the TaG Master class, with Lon Washburn (Top Kart / IAME) setting the pace early. Doug Van Wingerden (DR / IAME) and Jose Garcia (DR / IAME) looked to close the gap in the Pre Final but were unable to challenge as Washburn cruised to victory in the final. Unfortunately for Washburn, he came over the scales three pounds too light in post-race tech inspection, handing the win to Garcia. Van Wingerden would be promoted to second with Mike Marmurowicz finishing in third.

Josh McCormack absolutely dominated the Pro Concession Light class, setting the fast time in qualifying by over a second and leading every lap in the Pre Final and Final. Harrison Bond and Richard Pearson dueled for the runner-up spot behind him, with Bond coming out on top. Pearson was also able to hold off Pro Concession regular Curtis Cantrell for third to take the final podium spot.

It appeared to be Jason Stehney’s race to lose in Pro Concession Heavy, as he set the pace in similar fashion to McCormack. However, late-race contact in Turn 2 of the Final with another driver sent Stehney spinning. Andrew Foster took advantage to take the main event victory with Stehney rebounding to finish second ahead of Abel Camillo in third.

Sammy Tiger (CRG / CR125) set the standard in Shifter up until the Final, where surprise entrant Slade Westbrook (DR / CR125) joined the fight to challenge Tiger for the win. Westbrook started from the back of the class in the main event after missing all other sessions in the day, but by lap three, Westbrook had taken the point from Tiger. Although Sammy was able to close the gap in the final laps, it was too little too late as Westbrook to the win with a three and a half second margin of victory. New shifter driver Ben Cooper rounded out the podium in third, unable to catch Tiger for second.

TaG Senior driver Henry Brass (Extreme) has had a rough year and a half with a broken leg to bruised ribs. His rib problems sidelined him from TaG action in Round 1, but Brass did compete in the LO206 Senior division aboard a Team AMP package. Without testing of any kind on the Briggs engine, Brass set the pole in the largest class on the day. He would go on to break the draft in the Pre Final and Final, taking a dominating win. Adam Phillips (Razor) also escaped the fray to lock himself into second. However, behind the front two calamity struck in the final turn, forcing multiple drivers to retire including the likes of Chuck West (Margay), John Wehrheim (CKI), and John Intile (Margay). John Nichols (Margay) escaped the chaos to finish in third, while Larry Henderson (Margay) led the Margay invasion to victory in LO206 Master.

Atlanta Motorsports Park is a private motorsports country club that hosts kart races open to the public once month throughout the year along with other scattered public events. The second round of the AMP Kart Championship Series will take place on May 7th, just a few weeks away.

For more information on kart racing at Atlanta Motorsports Park as well as registration for the second round of the AMP Kart Championship Series, click here: http://atlantamotorsportspark.com/karting/kart-racing/