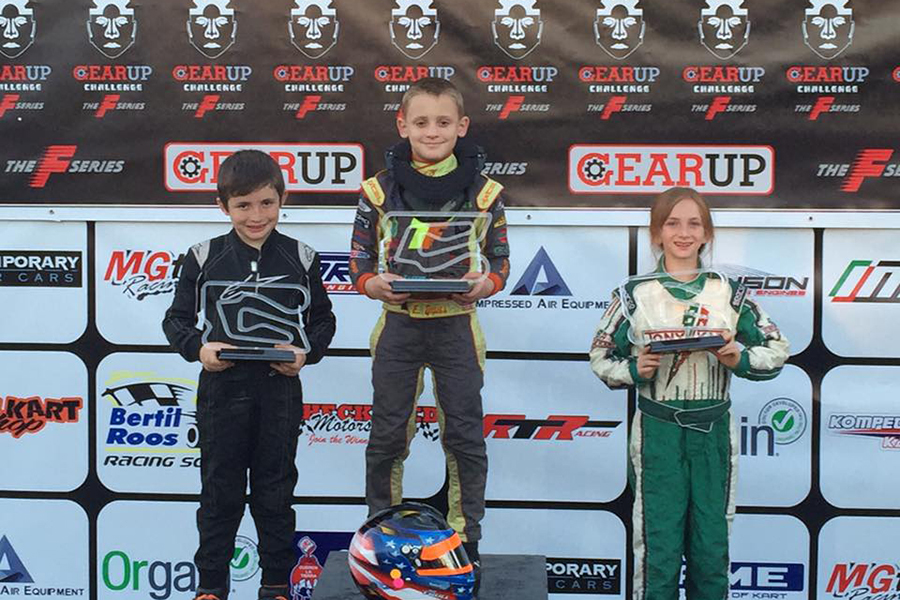 Looking to build off the wave of momentum he began at the second round of the 2016 WKA Manufacturer’s Cup just two weeks ago, Eli Trull and Team Fullerton USA returned to the GoPro Motorplex for opening weekend of the Gearup F Series to compete in the Formula Micro Rok class. Outside factors prevented Trull from being able to participate in Friday practice or Saturday Warmups, which meant that Eli and Team Fullerton USA would have their work cut out for them starting with qualifying.

After Team Fullerton USA got the #48 ready, Trull drove the Fullerton chassis to fifth in qualifying; however, that one session on track was enough for Team Fullerton USA to get the kart dialed in as he found the speed he was lacking by Race 1 battling for the lead from the drop of the green. Unfortunately, contact with another driver sent Trull down the order, costing him valuable time in the three heat format. Trull was able to close the gap to the lead back to just one second by the end of the race but ran out of laps to challenge for the win, finishing Race 1 in second at the checkered flag.

Due to an eventually reversed penalty imposed at post race tech inspection on the winner of Race 1, Trull started his Fullerton chassis on pole for Race 2. After falling to second place at the conclusion of the first lap, Trull kept his head up and went to work on the leader. Patiently working with and sizing up the kart in front of him all race long, Trull waited until the final circuit around to make his move for the win and made it stick, taking victory in Race 2 by a just a few feet.

Race 3 would once again see Trull start his Fullerton chassis from the point, and, once again, the field of drivers behind Trull were nipping at his heels. Maintaining his focus and composure after a red flag and losing the lead at halfway, Trull fought back with two laps to go to reclaim the top spot and pull away for his second race win on the day.

In the unique race format of the Gearup F Series, each of the three races in a raceday are equal in value and totaled in points to find an overall winner. With a second place finish in Race 1 and victories in Races 2 and 3, Eli found himself in a now familiar spot at the top step of the podium. Showing up without any practice prior to qualifying for a different engine and tire from his past few events, Trull proved to the world that his talent and adaptability are not to be doubted.

Now, Eli Trull Racing and Fullerton USA set their cross-hairs to New Castle, Indiana for Round 1 of the 2016 Route 66 Sprint Series on April 23rd 24th. Immediately following that event, Eli and the team will make the cross country road trip to Phoenix, Arizona for Round 1 of the SuperKarts! USA Pro Tour for the 2016 SpringNationals where Eli will clash with the best Micro Swift drivers in the nation.