Does the sport need fixing, or should we just pay more attention to it? 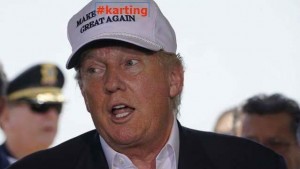 Unless you’ve been hiding under a rock, you know that were in the middle of election season and the race for the next President of the United States of America has been taking up the headlines of all the major news networks for months. Some of you may be familiar with one of the candidates bidding to become the next ‘leader of the free world’ – Donald John Trump. His campaign slogan is ‘Make America Great Again’, which you have plainly seen on the rare occasion that he wears a hat during his travels and many speeches. Another karting outlet sent out a photoshopped image of Trump wearing the hat, and replaced ‘America’ with ‘Karting’.

A karting friend sent me that picture, because when you first look at it, like most things on social media, you laugh and continue scrolling. This one, however, struck a cord with me and brought up the question:

Who are the people that believe karting is not great already?

2016 is the 60th celebration for the sport of karting, and I’m going to guess that many of you were not aware of that fact. Back in 1956, a race car builder named Art Ingels built the first kart out of his Southern California shop and the sport exploded from there. Karting is worldwide, with many different forms contested all over the globe, including sprint, road racing, dirt oval, pavement oval, and even dirt road course.

Over the course of six decades, the sport has evolved in terms of chassis, engine types, tires and safety. Year after year, race after race, it still remains a fun sport for the entire family to enjoy. From the age of five all the way up to 75, a boy or a girl, a father and a daughter, a mother and a son, or a grandfather and his grandchild – anyone can purchase a kart, put in the back of a pick-up truck and head out to the local track for a fun Saturday afternoon together at the race track. That continues to be my ‘mission statement’ regarding the sport of karting.

In contrast to this is my other quote I often like to use, which still applies:

“Karting is what you make it” 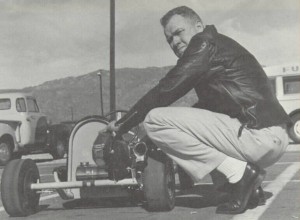 The ‘Godfather of karting’ Art Ingels

Karting can be anything. It can be a chance to race once a month at the local track. It can be the starting point to moving up the motorsports ladder. It might be the avenue to take you directly to IndyCar or Formula One. ‘Karting is what you make it’. There are happy karters who use the sport as a way to get them out of the house, just making laps for a half-hour, once a week. It’s a business that supports families. And, truthfully, it’s a lifestyle that only a lucky few will ever understand.

There is nothing that is stopping you from making karting fun and the greatest sport there is by simply enjoying the fact that you can afford to purchase a kart, take it to the track, and enjoy it with your family and friends. It’s just like any other hobby or sport people participate in – baseball, football, basketball, soccer, swimming, fishing, bowling, golfing. Karting has shown to be the ‘best bang for your buck’ in terms of motorsports.

Unfortunately, and I’m among this classification as well, the competition gene in your system drives you to be the best and race against the best. This requires you to spend more time focusing on having your equipment at its best, and the driver at their best. It could evolve spending more money on karts, engines, tires, or hiring a tuner or driver coach to help the driver get the best out of their potential.

For some, it adds to the stress rather than enjoyment – taking off work while trying to make enough money to pay for all the extras that are needed to compete at that top level. The fun meter starts to drop in this arena and it can damage or dent the relationship between parents and their children, or for the adult racer, force them to find a new hobby. This leads to people leaving the sport or moving to another form of motorsports. 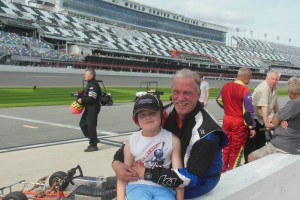 Karting for me has always been about fun and family

The flipside to this concept are the families I see on the road; the ones who compete at the top level, but still get the fun and excitement they would at the local level by just enjoying their time at the races. A number of young competitors we see each weekend are supported by parents, who are just as happy to be at the racetrack as the kids are. Road racing has a number of ‘regular Joes’ who take Friday off from work to spend the weekend under their 10’x10’ easy-up with their kart, preparing for their 30 to 45-minute race on Saturday and Sunday, enjoying a few cold ones each night with fellow competitors, and heading home on Sunday night to make their 8:00 am shift on Monday morning.

Unfortunately, social media tends to bring out the negativity in anything and everything. There isn’t a week that goes by that someone is not complaining about something having to do with the sport. With some of these ‘posts’, productive changes can be made within the sport as I witnessed within the Briggs & Stratton 206 community. There were a number of questions and concerns regarding discrepancies between the Briggs 206 rule structure and what was printed in the World Karting Association Technical Manual. Thankfully, the powers of both organizations got together, found the issues at hand, and fixed the errors within the WKA rulebook.

What brought on this column was the recent post by Challenge of the Americas promoter Andy Seesemann, who published the following:

A little background to start. The Los Angeles area has nearly 20 million people living in the area, as of 2015, ranked #2 in the entire United States. Currently, there are five tracks that are operating on Southern California – Grange, Apex, CalSpeed, Adams, Willow Springs with Buttonwillow, Bakersfield, San Diego located just a couple hours outside this LA area. Seesemann’s statement about just 350 racers, at the most, in the LA area is every likely right on the money.

The ‘competition gene’ is part of that, as now the smaller clubs are struggling, if they haven’t folded already, as racers are making the choice to race at the upper level of the sport, and dismiss club level competition. The other issue is certain industry members in the area guiding and supporting their customers to the bigger more competitive series, which requires higher budgets and ignores the lower budget racer. Racers see the glitz and glamour of the higher profile programs instead of the local clubs that are struggling, and choose to go there despite their inadequate budgets. And therefore, you have an area that has turned its back on the ‘grassroots’ level of the sport and now they’re wondering why overall numbers are so low.

Now travel east to the ‘Racing Capital of the World’ in the heartland of America – New Castle, Indiana, located just outside Indianapolis. New Castle Motorsports Park is open April to October, and the population ranks #26, with just over 2 million for its Combined Statistical Area (CSA) that includes 18 counties. The track, about 45 minutes from downtown Indy, has over 200 club members that are just drivers and welcomed 272 entries in its first weekend this month (well over 100 drivers with many racing multiple classes). The largest was the Briggs 206 categories with 47 in the CIK class and 41 running the combined Gold Cup / CIK bodywork division (many run both categories). 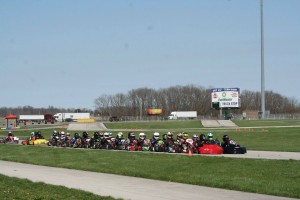 Further east along the coast is the new GoPro Motorplex, right in the heart of NASCAR country in Mooresville, North Carolina. Now into its fourth season of being open, the monthly club racing series averages over 100 drivers per race, with probably more than twice that in customers who just use the track to make laps in their kart during the weekdays. The rental kart business is booming, as the track is open nearly every day for open sessions and the many corporate outings they host weekly.

The general synopsis is having the core, grassroots level of the support showing successful numbers leads to the upper levels growing as well. On the industry side, 50 customers spending $2,000 a year equates to the rarity that you find in someone spending $100,000 – while adding the potential for growth with each customer and exposing the sport to more people. And as racers, spending one weekend at the club track with a friend or family member who has never seen the sport could lead to another possible racer joining you trackside the following month.

Part of the reason why I signed up to be a WKA Trustee when the seat opened up is that I wanted to help bring that focus back to the sanctioning body, just as every single organization in the United States should be – IKF, SKUSA, Rotax, etc. I believe the support and promotion of grassroots-level karting needs to be increased across the board. California, Indiana, North Carolina, everywhere across the country. Dirt racing, sprint racing, road racing, it doesn’t matter as long as we are putting more people into the seat of a kart – new or used, to help grow the market.

I get tired of people saying karting used to be fun or karting used to be great. Karting still and always will be great. The sport may not be like it was in the 70s when you first started. I know it’s different from when I began driving in the 90s. Hell, it’s evolved greatly over the past decade and during just the last few years. The sport will always continue to evolve, but the status of the type of racers will always remain the same. A certain percentage will have a lower budget, a much smaller percentage will have a larger budget, and there will always be a sliver on the pie chart that features racers with unlimited spending power. That’s life in motorsports, otherwise, we’d all be racing IndyCar, NASCAR or Formula One.

To expand on the comment made by Trevor Graegin on Seesemann’s Facebook post – karting is a ‘drug’. It becomes a passion or sometimes an addiction. Some are born into it and, for others, it grows on them. There is no other feeling of pulling down that visor just before hitting the track, or the morning dew covering everything in the paddock as you open up the trailer to the sun rising over the racetrack. Those who don’t feel karting is great have lost that passion or are masked by the negativity that exists in our current society, or, maybe they just have not defined what karting really is to them.

2 thoughts on “Behind the Laptop: Make Karting Great Again”