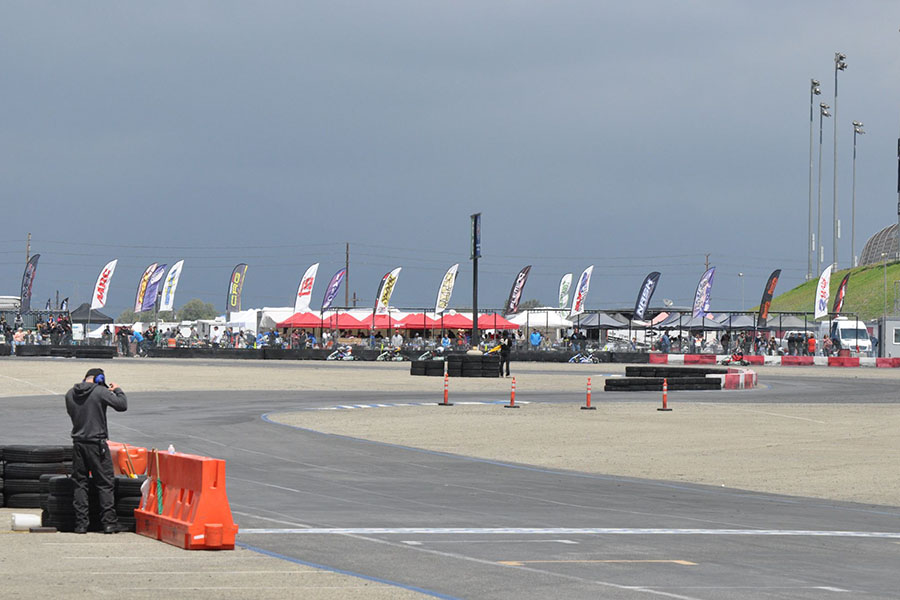 The Los Angeles Karting Championship hosted the third event of the 2016 on April 10 at the CalSpeed Karting facility. Wet weather rolled into the Fontana, California area in the late afternoon, dampening the chances for some and providing opportunity for others during a handful of main events. Tire strategy was key with the short period of rain and the continuing dry line forming with each passing lap. Nearly 150 entries took part, vying for one of the class victories as the championship chase continues.

The 2 Wild Karting TaG Senior division took the honor of the largest class of the event, featuring 23 competitors on the day. Round Two winner and SKUSA Pro Tour 2014 champion Jake Craig set the pace in qualifying with a 49.284-second lap to clear Billy Mugrave and the rest of the field by over two tenths of a second. Craig was pressured throughout the 10-lap Prefinal, not by Musgrave but instead from Carlee Taylor. She led a few laps but came 77 thousandths short of the win at the checkered flag. Rain started to fall four laps into the Final with all the drivers on slick Evinco tires and was red flagged due to a number of incidents on course, including Nicky Hays while leading. The race was restarted at the end of the day. Craig was shuffled back in the early laps, allowing Musgrave to take the point after the restart. Billy led the remainder of the race to score his first victory in the category, finishing just ahead of Craig. Moving up to third was Colby DuBato with Anthony Sawyer and Greg Osborne Jr. capping off the top-five. 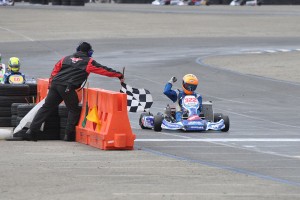 A total of 20 Junior 1 drivers took to the circuit on the day, with Carson Morgan and Blake Nash notching their second straight wins. Morgan nearly pulled off the event sweep in the Fleming Racing Engines Junior 1 Comer category. Cole Keith Cotham edged out Morgan for fast time in qualifying. Morgan fought back in the Prefinal, beating Cotham to the stripe by 56 thousandths of a second. Aden Dodge joined the fight early on in the Final, leading four laps before Morgan retook the position. Morgan led the remainder of the race to secure victory #2 of the season in the category. Dakota Tate drove up to second, dropping Dodge to third until a penalty put him down to seventh in the order. That promoted Rylee Martinez to third, Cotham to fourth and Chance Gibson in fifth. Nash won both the Prefinal and Final for his second victory of 2016 in the Sanner Racing Junior 1 Comer Pilot class. Gaven Perez and top qualifier Austin Manka completed the podium.

A new winner highlighted the Mike Manning Karting TaG Master division on the day with Diego Pelosi ending the win streak for John Crow. The battle began in qualifying with Tony Rossetti setting the fast time by nearly two tenths over Crow. The two-race winner struck back in the Prefinal, leading all 10 laps of the Prefinal with Travis Irving slipping into the second spot ahead of Rossetti. The conditions of a wet track drying and tire selection slowed the pace down for the field, and allowed Pelosi to shine, leading 12 of the 13 laps toward the race victory. Gary Lennon was a close second with Irving finishing third. Roy Steele led one lap, dropping to fourth with Crow ending up fifth. 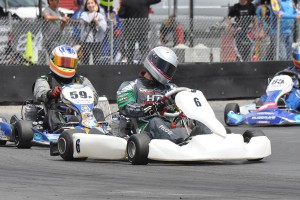 Diego Pelosi emerged as the top driver in the TaG Master division for his first win of the season (Photo: Kart Racer Media)

The Ryan Perry Motorsport X30 Junior category welcomed the third different winner in as many races as Joseph Daniele came through to take the checkered flag first. Daniele had to fight to reach the front after qualifying sixth behind fast driver Jesse Gutierrez. A number of drivers fought for the lead in the Prefinal, allowing Daniele the ability to slide forward lap after lap, reaching the lead on lap eight to secure the position and the win. Dante Yu gave Daniele an early challenge in the main event, only to fall 1.3 seconds back of the victor. Round Two winner Ryan Schartau finished off the podium in third with Gutierrez and Round One victor Trey Brown making up the top-five.

The shifterkart group was one of the first to hit the track for the rain, playing a big factor into the outcome of the Musgrave Racing Company S3 Novice Stock Moto class. Two-time race winner Royal McKee was the top driver in qualifying, besting the field by over six tenths of a second. The Prefinal was all McKee, driving away to a 2.3-second advantage in 10 laps. The wet weather allowed the field to close up, including Robert Alon. By the halfway point, Alon took over the lead and pulled away to a 10-second advantage over McKee by the checkered flag. Officials however penalized Alon two positions for jumping the start, thus giving McKee his third straight win and moved Garrett McKelvie to second. 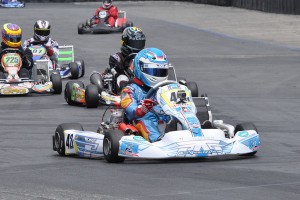 Weather effected the outcome in the Phil Giebler Racing Open 125 Shifter class as well with Kris Valdez earning his first victory of the season. Tyler Coffman was the driver to beat in the dry weather, setting fast time in qualifying by just 44 thousandths over Vivek Tandon and leading all 10 laps of the Prefinal. Coffman was not able to grid for the wet track for the 13-lap Final, opening the door for Valdez. Starting fourth, he took over the lead on the opening lap to go wire-to-wire for his first victory. Two-time race winner Slava Prikhodko was second with Jesse Romer up to the third position.

Daniel Inzunza became the third different winner in the P1 Engines Mini Swift division. Inzunza set the mark in qualifying over the 12-driver field, before dropping to the tail of the field on the opening lap of the Prefinal. He fought back with fast laps of the race to finish fourth as Cole Keith Cotham took the race win. Inzunza reached the front of the field three laps into the Final. Cotham kept the pressure on to the very end, only to come 31 thousandths short at the checkered flag with Inzunza taking the victory. Bryce Stevens took third with Chance Gibson and Joe Brienza completing the top-five. 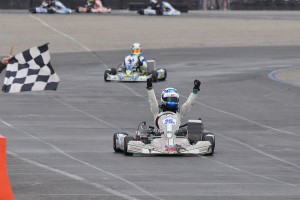 The freem Honda Kid Kart division was swept by Logan Ainsworth. For a second straight event, Ainsworth led from qualifying to the end of the main event over the nine-driver field. Ainsworth led all eight laps of the Prefinal after recording the fast lap in qualifying. The Final was a wire-to-wire victory pulling out to a 1.7-second advantage. Drake Cardey drove to second with Round One winner Brodey Vicars in third.

Ricco Slahaimoun took advantage of the wet weather conditions to secure his first victory in the Mack Motorsports PRD Junior 2 class. Alex Siragusa led the way in qualifying, edging out Round Two winner Mia Butts by just four thousandths of a second, before leading all 10 laps in the Prefinal. Slahaimoun drove up to the lead by lap two, showing the way for the remainder of the race for the victory. Siragusa held onto the second position with Lauran Adams ending third.

Cooper Hicks returned to the top of the podium in the Empire Karts Micro Swift category. Hicks swept the day, from qualifying to the Final, to earn his second victory of the season. The gap grew to 24 seconds in the main event with Tuesday Calderwood and Round Two Frankie Mossman. 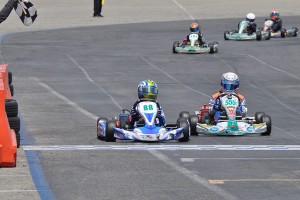 The next event for the LAKC program is set for May 15 at the same CalSpeed facility. For more about the 2016 Los Angeles Karting Championship program, please visit LAKC.org and ‘Like’ them on Facebook.