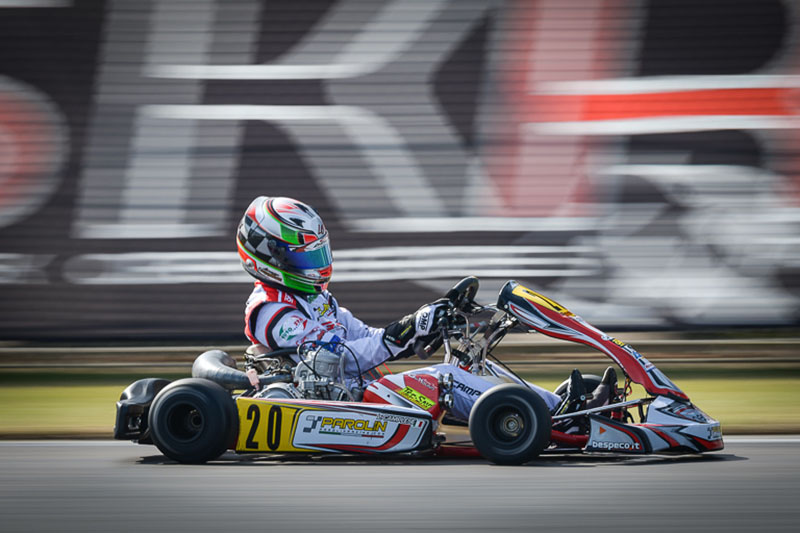 The third meeting of the 2016 WSK Super Master Series at Muro Leccese has posed new challenges for the new Parolin Racing Kart team. The La Conca circuit has in fact had a special coating that generates a lot of grip, what is rarely found on other tracks, especially as the temperature rose quickly in sunny southern Italy . In these unusual conditions Lorenzo Camplese tested various configurations before finding a good balance. Finishing in the top 10 of KZ following a rise of 11 places in this context should be seen as an encouragement for the upcoming events calendar.

“We were well aware that the competition at La Conca would not necessarily allow us to shine as we have done since the beginning of the year,” says Alessandro Levratti, the young team manager of Parolin Racing Kart. “We expected to find new grip conditions for our team and our equipment. This allowed us to work on the versatility of our chassis and prepare for the rest of the season. This irreplaceable experiment in a race situation will bear fruit in the coming months.”

The main problem faced by all teams on a track with very high grip such as La Conca regarded the functioning of the tyres. Vega tyres suffered in KZ at Muro Leccese, under the combined action of the grip, temperature and the power of the 125 gearbox engine. Early wear and blisters dampened the enthusiasm of the top competitors. It was a first for the Parolin Racing Kart Team, founded at the beginning of the year, against very experienced teams that have collected a lot of data in the past.

The performance itself was not the main concern for Parolin. The challenge was to find the best possible set-up during the races, taking into account the constant changes of grip over the event. After great time in free practice, but an average lap time in official qualifying, the team provided Camplese with several configurations to enhance the use of the tyres. During his second heat he achieved his best performance at just 0.064 ” from the fastest lap. During the pre-pfinal, he fought in the top five before losing some speed at the end because of a tyre damaged by a blister.

The team synthesised this experience for the final and Camplese was able to rely on the consistency of his machine to gain 11 positions. His fastest time on the 16th of 20 laps of the race confirmed the decisions of the Parolin technicians.

Although such conditions will not perhaps not often recur during the season, the learning from the La Conca meeting will have the opportunity to be reinvested in the important races looming. In less than three weeks, the European Championship will begin in France on the Aunay les Bois circuit at Essay and Parolin Racing Kart Team will be there with strong ambitions.