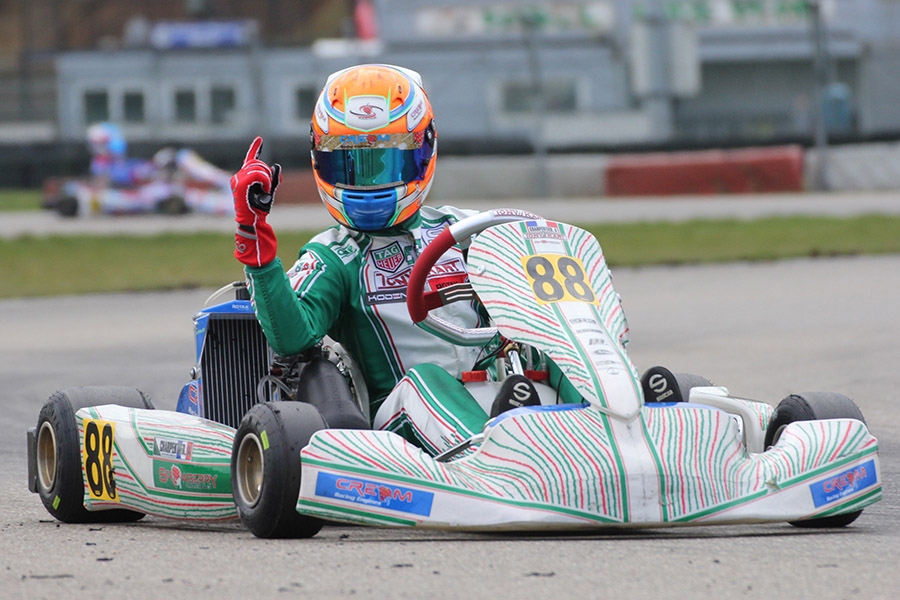 The ROTAX MAX Euro Challenge has successfully started into its 2016 racing season: For the 13th successive year Europe’s most popular ROTAX series – promoted by RGMMC Group – attracts the international elite of karting. Over 150 drivers from over 20 nations entered the season opener at Genk (Belgium) from 28th of March to 3rd of April 2016, showing a highly balanced competition throughout the entire weekend. Even the Belgium weather made for mild and vernal conditions providing the foundation for thrilling racing on the 1.360 metres long circuit. In the end Axel Charpentier (juniors), Nicolas Schoell (seniors), Kevin Ludi (DD2) and Martin Pierce (DD2 Masters) were the beaming double winners of the first round of the year.

In the qualifying one witnessed a very high competition and counted not less than 45 drivers being separated by less than one second in the end. Yet the drivers of the second group proved to be dramatically faster than the first one, taking the top nine positions after the qualifying. On top it was Adam Smalley (Coles Racing) setting the first benchmark of the year. The young Brit tied in with his latest success at the ROTAX Winter Cup and drove the quickest time by 56.247. Missing the top by only 0.047 seconds, Joe Phillips (KR Sport) from the UK ended the session in second spot ahead of his teammate and fellow countryman Oli Caldwell (KR Sport). The local heroes Xavier Handsaeme (Bouvin Power) and Xander Przybylak (Francois Slangen) completed the top five positions. Tom Canning (KR Sport) from the UK, who had been the fastest man in the first group, ended up in tenth place of the 54 youngsters comprising field.

The heats could not have been more balanced, coming up with different winners in each single race! Dutchman Glenn Van Berlo (Hugo Motorsport), the Brits Mark Kimber (Strawberry Racing), Oli Caldwell, Joe Phillips and Axel Charpentier (Strawberry Racing) as well as Frenchman Thibaut Clement (SG Drivers) were the victorious youngsters. But just winning was not the key to success, as one had to gain good results in all of the heats. Finally it was Glenn Van Berlo, who took the top in the heat’s merge granting him the pole position for Sunday’s prefinal. Second place went to Friday’s quickest Adam Smalley, who drove some very consistent races. Joe Phillips took third place in the heat ranking ahead of Oli Caldwell and Belgium’s hope Xavier Handsaeme in fifth place.

Adam Smalley had the best start into the prefinal. In fact the Brit even pulled away a few metres. But he could not keep his leading gap since seven more juniors gained on the leader quickly. From then on the top kept changing consistently and one saw Oli Caldwell, Glenn Van Berlo and Axel Charpentier in the leading role for at least one time. As the race approached the end, Axel Charpentier showed the best performance and took the win ahead of Glenn Van Berlo, Adam Smalley, Oli Caldwell and Lauri Leppa (VRT) from Finland.

After the start of the final, Axel Charpentier had to leave way to Glenn Van Berlo, equally having a lot pressure from behind. The lead changed a few times between Van Berlo and Charpentier until the race approached its decisive stage. Up to 20 youngsters closed the gap to the leading group and a big fight began. This was when Charpentier seized his chance to pull away, leaving his opponents behind. Finally the Brit took the second win of the day, crossing the line over seven seconds in front of Glenn Van Berlo and Adam Smalley. Yet the latter was given a time penalty due to unfair driving which threw him back to 19th place. So Lauri Leppa inherited the last podium place ahead of Oli Caldwell and Mark Kimber. 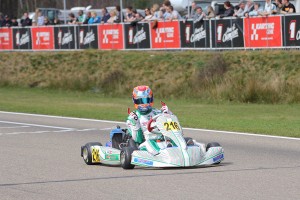 After the heats Jordan Brown-Nutley was the best man. The UK driver was the only one being able to win two races. Adding another third place in his last heat, Brown-Nutley conquered the pole position clearly. Behind him, Jack McCarthy did a good job and established himself in second position, leaving more experienced seniors like Russia’s Denis Mavlanov (KR Sport) and Josh White behind. Fifth place went to Frenchman Adrien Renaudin (Kart Pro Karting). Friday’s fastest man Berkay Besler was in good shape for the heats, too, which he proved by one race win. Yet the other heats were tough for him. Two more modest results threw him back onto 14th place of the heat’s merge and he was not supposed to play a decisive role during the rest of the weekend.

The prefinal began with a massive pile-up, which involved almost half of the grid, mixing up the positions dramatically. It took quite a few laps until the order became clear again, coming up with Nicolas Schoell (Strawberry Racing) as the new leader. Together with his Irish teammate Gary Donnelly (Strawberry Racing), the Austrian pulled away from the rest of the grid. Finally the ex junior won the prefinal close ahead of Donelly by a gap of 0.651 seconds. Third place went to Glenn van Parijs (Bouvin Power) from Belgium who had picked up the race by 21st place only! Sam Marsh (Dan Holland Racing) and Charlie Turner (TBA) completed the top five positions of the semi final.

Nicolas Schoell was in control of the final race, too. Although he had to struggle with his opponents the first laps – even losing the lead shortly – the Austrian showed no weakness and defended the top against all chasers during the 17 laps race distance. By a secure gap of 1.294 seconds, Schoell saw the chequered flag first in front of Gary Donnelly. The fight for the third place was far more open. Up to eight drivers aimed for the last podium position and in the end it was the reigning vice champion Rinus van Kalmthout (Daems Racing) from the Netherlands conquering the third place. Sam Marsh finished fourth ahead of Frenchman Thomas Drouet (RM Concept). 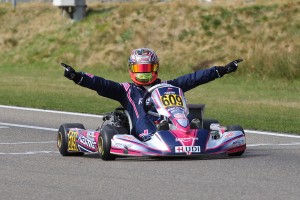 Constantin Schoell (Daems Racing) from Austria was in control in the qualifying. By a time of 54.318 seconds the Tony Kart driver set the fastest time of the day. Close behind, Kevin Ludi (Spirit Racing) from Switzerland followed in second position pushing Abdullah Al Rawahi (KMS) and Joey Alders (Schepers Racing Service) into the chasers roles. The Italian Cosimo Durante (Wild Kart Racing Team) complemented the top five after the qualifying.

The heats came up with a new order: Martin Mortensen (RS Competition) was the driving force this time: With one win, a fourth and a second place, the Dane boosted himself onto his first DD2 pole position ever. Kevin Ludi confirmed his the second place of the ranking, pushing Poland’s Lukasz Bartoszuk (CRG S.P.A.), Russia’s Haralds Garkaklis (333 Autosport) and Belgium’s Jordy Lievens (Vici Motorsport) to the following positions. Friday’s pacemaker Constantin Schoell was without luck: He was excluded in his first heat due to cutting the track over the curbs. Consequently he dropped back to 15th place in the ranking, excluding him from the circle of favourites for the final stage.

For the prefinal, pole sitter Martin Mortensen could not tie in with his speed from Saturday. He quickly was pushed of the throne and even off the track, only ending up in 21st place. Equally Kevin Ludi and Jordy Lievens were in best shape. Throughout the race they were able to head away from their opponents. They settled the victory amongst themselves. In the end Kevin Ludi crossed the line first ahead of Jordy Lievens, while Barrie Pullinger (Dan Holland Racing) from the UK, Dzianis Slavinski (Uniq Racing Team) from Belarus and Mick Wishofer (VPDR) from Austria followed up to fifth place.

In the final, Kevin Ludi and Barrie Pullinger set the pace at first. Both headed away from the grid until they began fighting by halftime. Consequently Mick Wishofer, Lukasz Bartoszuk and the reigning DD2 champion Ferenc Kancsar (VPDR) closed the gap. An exciting final spurt began and Ludi seized the chance to pull away. Metre by metre the Swiss bunked off and finally took his longed for victory. Almost two seconds behind him Bartoszuk asserted himself in second spot in front of Wishofer and Pullinger. Kancsar finished on a conciliatory fifth place, regarding that he started the weekend with 34th place in the qualifying due to technical problems.

As for the DD2 Masters, Dutchman Dennis Kroes (Team Kroes Goedsign/JVD Power) was the fastest man in the qualifying until he had to leave the top to Martin Pierce (Uniq Racing Team) after the heats. From then on the Irish man was a class of his own, taking the deserved double win in the main races. In the prefinal Tamsin Germain (DG Racing) and Richard Faulkner (Coles Racing) followed in second and third spot, but none of them could repeat the performance in the final. Here Slawomir Muranski (Wyrzykowski Motorsport) from Poland and Dennis Kroes completed the top three on the podium.

Now the ROTAX MAX Euro Challenge is already watching out for its next round. At Castelletto (ITA) one will go for the second round from 9th to 15th of May. More information regarding reports, photos, results and live TV stream are available on the official websites www.rotaxmaxeurochallenge.com or www.telemundi.com.