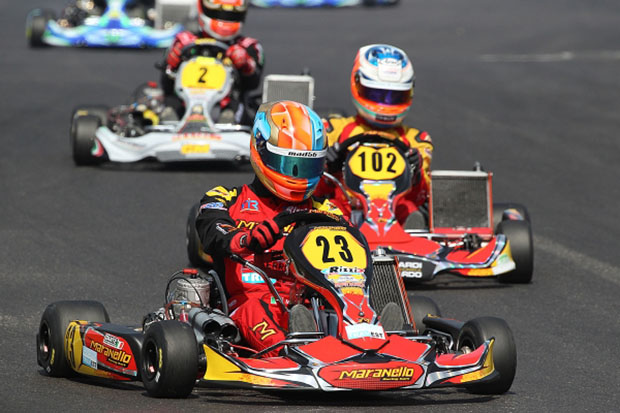 Dante ended second absolute in the Trophy, while Sani, at the debut with Maranello Kart, has been very competitive too. Maranello Kart’s colors have been shining also in the other categories with the highs of the victory of Cesari in Prodriver Under and that of Danti in Prodriver Over.

Maranello Kart and its drivers have been once again protagonist in the final round of the 27th Spring Trophy held at the South Garda Karting track of Lonato. The great debut with the Italian team of Massimo Dante and Flavio Sani in KZ2 was rounded up by the stunning performances put in by Roberto Cesari in Prodriver Under and Fabio Danti in Prodriver Over.

Massimo Dante, assisted by SG Race led by Stefano Griggio and by Rizzi for TM engines, confirmed the speed of the Maranello Kart chassis in KZ2. He has been among the contenders to the final victory since the beginning, after the successful campaign in the first two rounds of the Spring Trophy. In the final round, Dante has been among the most competitive drivers, but this time around he had to settle for P2 at the end of a very tight Final until the closing meters. Thanks to the victory obtained in the first round of the 20 March and the second place in the final held on April 3rd, Dante ended on top of the absolute classification of the Trophy, equal on points with former team mate Bernardotto. This time the Maranello Kart driver had to give the trophy away though, due to the tie breaker of the number of pole positions. This did not allow Dante to continue his winning string at the Trophy after his victories in 2011, 2012 and 2015. The second absolute place confirmed him among the main protagonists anyway.

Flavio Sani had a sensational debut with Maranello Kart by Sg Race with Modena by SRP engines in KZ2. Sani has been very competitive since the beginning, he obtained the third time in qualifying being only 33 thousands of a second shy of Dante and confirmed himself on top in Prefinal. Sani had secured an excellent second place in the race but was later on handed a 10s time penalty and lost 7 positions with it for jumping the start. That was a real pity as this penalty prevented Sani to get a prestigious result in the Final, as he closed his effort in sixth place at the end of a good comeback with the icing on the cake of the fastest lap of the race. Without such a penalty, Sani would have certainly celebrated his debut with Maranello Kart on the podium.

MARANELLO KART VICTORIOUS IN PRODRIVER UNDER AND OVER

Among the drivers wearing Maranello Kart’s colors at the 27th Spring Trophy – the race that this year set a participation record with 500 drivers partaking in the two rounds – Roberto Cesari has been shining on Maranello-Tm. He won in fact the Prodriver Under Trophy thanks to the victory in the Final that followed the one scored in the first round. Fabio Danti claimed the final victory in Prodriver Over instead and secured the Trophy with it. The other two Maranello drivers of Prodriver Over Cristian Griggio and Gianni Corti came also to the fore ending respectively second and third in a all-Maranello-Kart podium.

Maranello Kart also scored a good result at the Rok Cup Trophy held in the same weekend at the Circuit 7 Laghi of Castelletto di Branduzzo. In Mini Rok, Lorenzo Marin took the eighth place in the Final after the ninth in qualifying and the fifth in the heats, while Brando Pozzi recovered from the 29th place of heats to the 19th place.