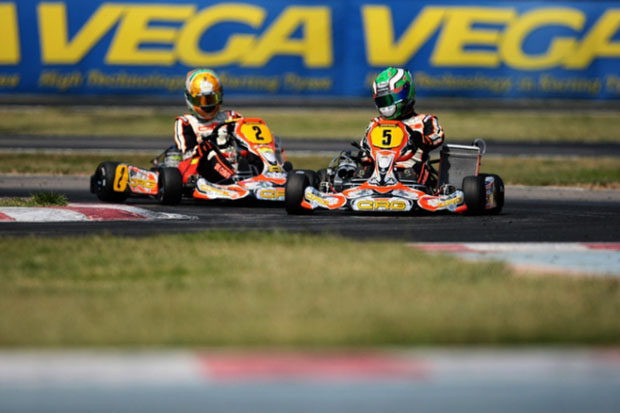 De Conto and Camponeschi great protagonists of KZ in the third of the four rounds of the WSK Super Master Series. Joyner on the podium of OK, Hiltbrand still leading the classification. Wilson and Hauger front runners in OK Junior. Maiden win for Mallet of Team Gamoto in 60 Mini.

CRG drivers have been among the main protagonists of the third round of the WSK Super Master Series held in La Conca, showing great competitiveness in all the three main categories. Team Gamoto and Evan Mallet finally getting the victory that they were hunting in 60 Mini.

CRG displayed a great shape starting from qualifying in KZ, as Flavio Camponeschi (CRG-Parilla) posted the absolute quickest time, while Paolo De Conto (CRG-Maxter) was quickest of his group and second absolute just 94 thousands shy of Camponeschi. This is the best picture of the event that was confirmed in the remainder of the weekend, despite some blistering problems at the tyres. Simo Puhakka (CRG-Maxter) also found his place among the quickest of the Prefinal, as he recovered well from some hiccups in the heats. Unfortunately, the victory that CRG drivers could aim to went missing in the Final. De Conto had to fight blistering on his tyres and had to give up on his hopes for a podium finish, settling for P4. Camponeschi accumulated some delay due to a contact early into the race and closed his effort in sixth place. Puhakka was forced to the retirement. CRG Holland’s Jorrit Pex closed within the top ten in P10 after a great comeback run.

Giacomo Pollini and Renda Motorsport got on the podium of KZ2 and this second place confirmed his classification lead. Luigi Musio and Team Palmisano were also on the podium in third place. Fabrizio Rosati ended 24th due also to a penalty after running a good Prefinal and earning his place among the finalists.

Tom Joyner (Zanardi) got on the podium of OK by taking a good second place at the end of a weekend where he showed great competitiveness. Pedro Hiltbrand (CRG-Parilla) closed right at the feet of the podium, managing to recover from a troubled Prefinal where he ended 14th. Hiltbrand confirmed therefore his classification lead thanks to this fourth place and will reach the closing round of Adria next May 22nd as the favourite. The other two CRG drivers Felice Tiene and the Finn Paavo Tonteri hit some troubles. The first ended tenth after a promising sixth place in the heats, while the second was 14th.

The British driver Teddy Wilson (CRG-Parilla) put in a great race in OK Junior. He ended fourth in the Final at the end of a good weekend where he showed a crescendo of results: the 16th place in qualifying was followed by the 13th after the heats and the fourth in the Prefinal. A good confirmation came also from the Norwegian Dennis Hauger (CRG-Parilla), who was seventh in Final after a great racing weekend (6th absolute in qualifying, 11th after heats and 6th in Prefinal). The Canadian Antonio Serravalle (CRG-Tm) had to retire from the Final, while the French Pierre-Louis Chovet (CRG-Parilla) just missed out in finding his place among the finalists, as he ended the Prefinal in P19.

The French Evann Mallet (CRG-Tm) of Team Gamoto has had the upper hand since qualifying in 60 Mini. He kept his momentum in the Final closing his effort with a great victory. Among the most competitive drivers, the Malaysian of Team Gamoto Adam Putera was fourth, and Justin Polman of CRG Holland, fifth. Thanks to this victory, Mallet is currently third in the classification and among the main favourites in the title hunt.

Dino Chiesa, CRG Team Principal: “We are quite happy at the end of the third round of WSK. I would like to emphasize the problem of the front fairing though. Apparently, the nose cone of some karts never gets displaced. Every law has its loophole. The front fairing rule has to be revised, it is definitely not possible to run the European and the World Championship in this situation with the risk of wasting a season long work. I hope that the International Federation will address this issue and sort it in the interest of karting.”

“In La Conca – continued Dino Chiesa – we could have got something better, but the final balance is very positive anyway. We ended at the feet of the podium in OK Junior with the fourth place of Wilson, while Hauger was penalized at the start and ended seventh. We had two drivers in the top ten anyway. This shows that our material is good. The performance growth of our OK drivers is continuing: Hiltbrand confirmed his classification lead and was again very fast. His recovery from the 14th place of the Prefinal to the 4th of the Final has been excellent. We also scored a podium with Joyner, who ended second. We experienced some blistering problems in KZ, but we showed great speed throughout the weekend. We are definitely ready to take the win.”