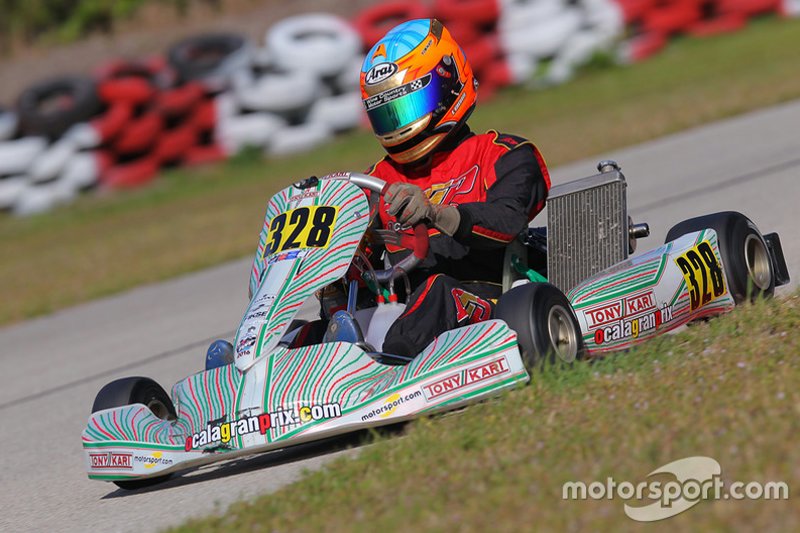 The Ocala Gran Prix operation has continued to produce some of the top drivers here in the United States. First it was Nick Neri, next came Oliver Askew, and now the reigns belong to Kyle Kirkwood. The Florida pilot won the 2015 US Rotax Grand Nationals in Kershaw, South Carolina. Last year began with a double championship at the Florida Winter Tour in the Rok Senior and Rotax Senior divisions. The three-time Team USA member began this season in the same fashion, repeating as champion in both categories once again.

The Florida Winter Tour Rok Cup USA weekend took place at the Palm Beach Karting Center in Jupiter, Florida. Kirkwood entered sitting second in the title chase behind former teammate Ryan Norberg. He began the event earning the fast time in qualifying before going on to win all three heat races. The 15-lap Prefinal was a battle with Alain Sisdeli, with Kirkwood pulling out the win on the final lap. The fight in the main event was three drivers with Norberg joining the fray. Sisdeli retired early, leaving the top two championship contenders to fend for the victory. Norberg emerged as the leader and was able to pull off the win over Kirkwood. Thanks to his full effort on the weekend, Kyle secured the championship by 23 points over Norberg.

The following weekend was all Kirkwood for the Rotax Max Challenge portion of the double-weekend in Palm Beach. The OGP / Tony Kart driver swept the weekend for his second time in the three event program. It was capped off with a battle against Senior rookie David Malukas, with Kirkwood coming out the victor by 1.541 seconds to make it a 418-point advantage in the new progressive point structure for the Florida Winter Tour.

Each of the championships come with trips to Italy. The Rok title gives him a ticket to compete in the Rok Cup International Final 2016 at the South Garda Karting circuit in Lonato, Italy on October 19-22. The Rotax championship adds another invite to be part of Team USA for the Rotax Max Challenge Grand Finals at the Circuito Internazionale Napoli in Sarno, Italy on October 15-22. With the events scheduled for the same weekend, Kirkwood will travel to Italy for the Rok event in Lonato, missing out on the Rotax world championships. Car racing plans are also in the works for this season, after Kyle showed very well in the F1600 Formula F Championship Series last year. 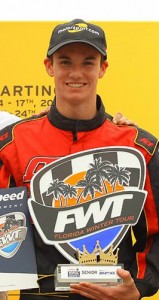 Chassis: Tony Kart
Engine/Engine Builder: Ocala Gran Prix
Sponsors: Ocala Gran Prix
Series You Compete In: Florida Winter Tour, US Open, Rok Cup USA, North Florida Rotax Max Challenge
Years Karting: 12 Years
How did you get started in karting? Through a friend of my Fathers when I was at the tender age of four.
What has been the high point in your racing career? Most likely this year after defending both FWT championships.
What are your goals in racing? To make a career in either IMSA Prototypes and/or WEC.
In a few words, how would you describe your driving style? Adaptable and aggressive when needed.
Funniest moment at the race track? There’s really too many to pick out the funniest, but however the most memorable one would have to be when I by accidentally made Mike Speed go through the barriers on a practice day at OGP. The story is much too long to write.

What do you do when not at the track? Surf, Spearfishing, Hunting, and Fishing
What are your goals outside of karting? Succeed in my academics, and everything i do
What type of street car do you drive? Subaru Wrx
What type of street car would you like to drive? Pagani
What are your pet peeves or things that irritate you? Sound of shaving ice, and when people chew with their mouths open
What do you think could be done to improve the sport of karting? Less bumping and hitting in racing situations
What are your favorite aspects about the sport of karting? How team oriented the sport is and if you can’t work as a team you wont be successful