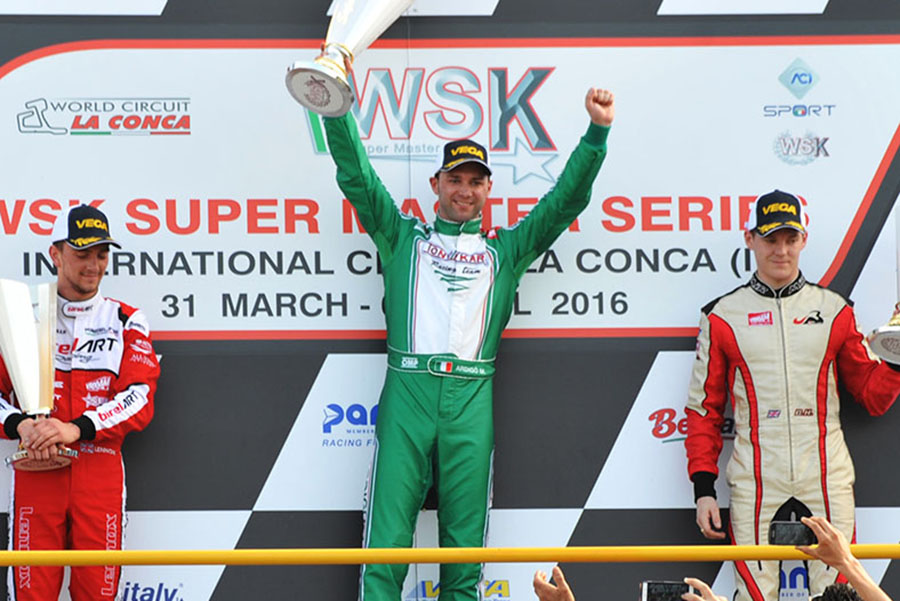 The heat is rising on the races of the WSK competition in Muro Leccese. The event took place at the facility set near the Adriatic coast, where drivers and teams had to deal with the springlike temperature of the weekend. They needed to adjust the setting of their karts in order to meet the new weather condition, which characterized the third round of the WSK Super Master Series. However, the hot weather was not the only concern of drivers, because also the races were as heated as ever. Once again, the duels on track in each of the five categories deserve to be seen again, after the live streaming provided by WSK Promotion on the official website wsk.it. The race towards the top of the standings, when there is only the round of Adria on 22nd May left, will be still available on the website of WSK Promotion.

This time Marco Ardigò (Tony Kart-Vortex-Vega) had one more opponent in his race towards victory in KZ. It is the English Jordon Lennox-Lamb (BirelArt-Parilla), who was very determined in his attacks during today’s Final. His grit obliged the Italian driver to exploit to the fullest his tyres. Ardigò, however, managed to win a gripping race. Also the Italian Paolo De Conto (CRG-Maxter) put in a terrific performance; he gave in only during the last laps, when he got overtaken by the English Ben Hanley (Croc-TM), who scored the third podium position. 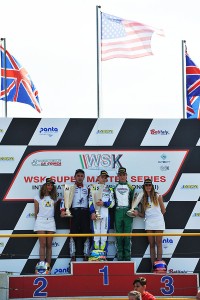 Lorandi back to victory lane in KZ2

After the poor result of the weekend in Sarno two weeks ago, Leonardo Lorandi (Tony Kart-Vortex-Vega) needed an outstanding performance to keep a chance of victory in the KZ2 Series. That’s why the Italian driver’s result is particularly significant: he won the race but the current leader, his fellow countryman Giacomo Pollini (CRG-TM), placed second and he is still the driver to beat. Another Italian deservedly scored the third position: Luigi Musio (CRG-TM), one of the most interesting drivers of the KZ2.

In OK Sargeant achieves a new success in La Conca

It is definitely the circuit, the one in Muro Leccese, that the American Logan Sargeant prefers. He won the 2015 World CIK-FIA Championship right here, and today he grabbed victory also in the OK Final. The American is now back with the top drivers in the category standings, despite the attempts of the British Tom Joyner (Zanardi-Parilla) to keep him at bay. The Brit tried to gain the head of the race during the first laps, but then he had to surrender to the American’s attacks. He managed, however, to keep the second position, finishing ahead of the French Clement Novalak (Tony Kart-Vortex), third.

The defeat in the Final of Sarno made the Danish Noah Watt (Tony Kart-Vortex-Vega) more confident: he was sure he would dominate here at La Conca in OKJ. He was right: he led the race since the Heats, leaving to his opponents only the battle for the second place. Eventually, at the end of a breath-taking challenge, the runner-up was the Moroccan Sami Taoufik (FA Kart-Vortex), who beat the Belgian Ulysse De Pauw (BirelArt-Parilla) into third.

At the beginning of the 60 Mini Final, the Italian Gabriele Minì (Energy-TM-Vega) managed to pull away but the French Evan Mallet (CRG-TM) speeded up, closed the gap and gained the head of the race until the finishing line: it was his first WSK victory. The Italian Michael Paparo (IP Karting-TM) scored the second position, while Mimì dropped back to third.