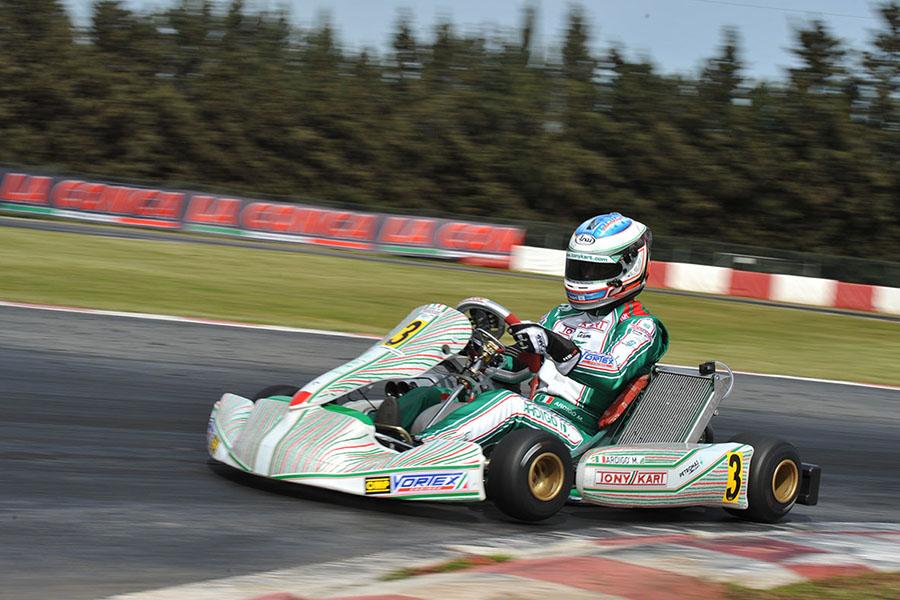 After the qualifying heats, there are great expectations for tomorrow’s races. There are definitely going to be heated races, even though we are only at the third out of four rounds of the WSK Super Master Series. The great show of international kart racing is hosted, this weekend, by the facility set in Muro Leccese (LE): the 200 drivers of the 5 categories taking part in the competition have left aside strategies, they simply aim at victory. That’s why today, too, there were lots of different winners in the heats. So, great finale tomorrow, when fans will be able to watch their favourite drivers from the stand of the World Circuit La Conca. Don’t forget the live streaming – starting from 11.00am – on wsk.it.

The Italian Marco Ardigò (Tony Kart-Vortex-Vega) is the leader in KZ thanks to two victories in the Heats and he will be the pole sitter of tomorrow’s Prefinal A. The Czech Patrick Hajek (Kosmic-Vortex) will fill the second slot. Good start for the Italian Paolo De Conto (CRG-Maxter): he won once and grabbed the pole in Prefinal B; second position for his team-mate Flavio Camponeschi (CRG-Parilla). In KZ2, best performance for the Italian Leonardo Lorandi (Tony Kart-Vortex-Vega), ahead of his fellow countryman Luigi Musio (CRG-TM).

Sargeant ahead in the heats

Logan Sargeant (FA Kart-Vortex-Vega) dominated the heats in the OK category. He won the three races on schedule, after setting the best time in Qualifying. In tomorrow’s Prefinal the American driver will have the French Clement Novalak (Tony Kart-Vortex) next to him; Novalak was always among the top drivers as well as the Dutch Martijn Van Leeuwen (BirelArt-Parilla). The latter will start from the second row together with the Polish Karol Basz (Kosmic-Vortex), who achieved a good recovery from the 13th time set in Qualifying.

Watt made the grade in OK Junior

The Dutch Noah Watt (Tony Kart-Vortex-Vega) won hands down in OKJ and he will fill the first slot on the Prefinal A starting grid. Next to him the Spanish David Vidales (Energy-TM). The duel with the Moroccan Sami Taoufik (FA Kart-Vortex) continues even though not at close distance: Taoufik, in fact, will start from the pole position of the Prefinal B, with the Belgian Ulysse De Pauw (BirelArt-Parilla) in second position.

It is hard to understand who will be the top driver in the 60 Mini. We need to wait until tomorrow’s two Heats, because today all the races were won by different drivers: only Gabriele Minì (Energy-TM) managed to win twice, while the drivers who won once are the Estonian Aron, the Romanian Iancu (both on Tony Kart-TM), the French Mallet (CRG-TM), the Italian Pizzi (Energy-Iame), Paparo (IP Karting-TM) and Antonelli (Exprit-TM).