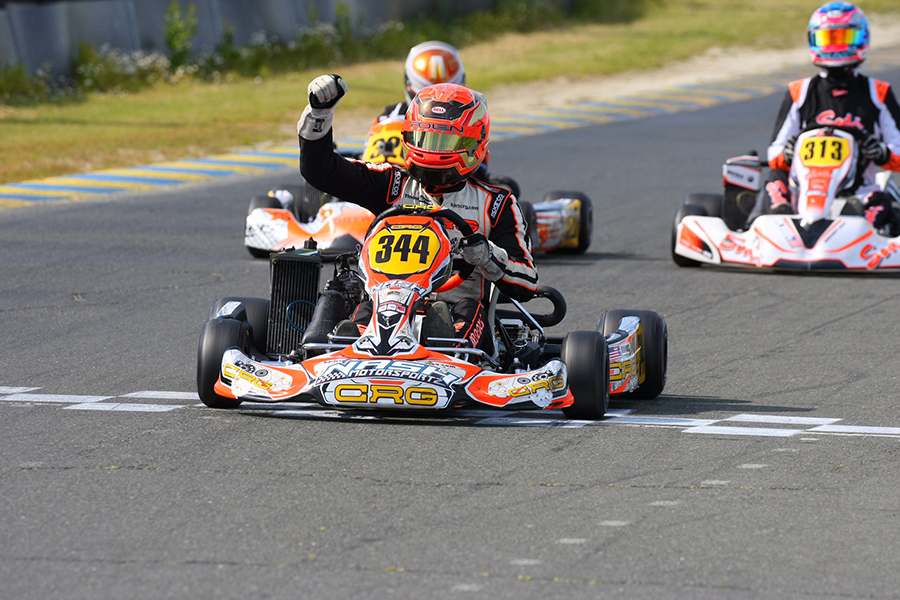 The 2016 Challenge of the Americas closed out the season Sunday at the Simraceway Performance Karting Center in Sonoma, California. A solid number of drivers contested the final two rounds of the series with most of the championships coming down to the final round. On the line were three Rotax Grand Finals tickets, which included the champion of Senior, Junior, and Masters Max with the prestige of earning the title in the in new Shifter Senior, Shifter Masters, Mini Max and Micro Max. Christian Brooks, Nick Brueckner and Mike Jones became members of the 2016 Team USA squad for the Rotax world championships by earning their respective titles at the Challenge. 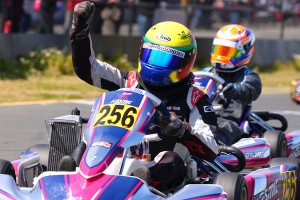 Carter Herrera landed his first Junior Max victory with a third to first move on the final lap (Photo: SeanBuur.com)

Things did not begin on the positive side for Christian Brooks on Sunday. The Nash Motorsportz / CRG driver entered with the chance to clinch the Nash Motorsportz Senior Max championship, but the day began with him showing up late to grid for qualifying. He was not able to complete a lap and thus started 15th in the Prefinal. The Nash Motorsportz / CRG driver charged his way through the field to end up second behind top qualifier Darren Keane (Orsolon Racing / Tony Kart). Keane led the field to the green flag, but it was Nathan Adds that emerged as the top driver early on in the Dallas Karting Complex / Sodi Kart entry. Adds led for the majority of the race until Brooks reeled him in and took over the lead with three laps remaining. Christian held on to take his fourth checkered flag of the season and claim the championship. In a photo finish, Adds edged out a charging Coltin McCaughan (Rolison Performance Group / Kosmic) for the second spot with Keane finishing fourth and Senior rookie Kellen Ritter (Rolison Performance Group / Kosmic) in fifth. 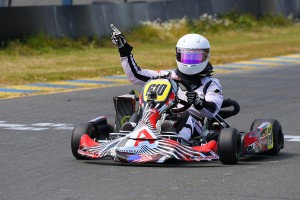 It was a great end to a difficult weekend for Carlos Calderon in Masters Max (Photo: SeanBuur.com)

With a fifth victory on Saturday, Nick Brueckner (Orsolon Racing / Tony Kart) locked up the Rolison Performance Group Junior Max championship heading into Sunday. He attempted to try and score the perfect series with six wins, however, a chucked chain in qualifying put him back to the tail of the 19-driver field with Hannah Greenemeier (Rolison Performance Racing / Kosmic) at the point. Brueckner worked his way up to the front quickly, and finished first but withdrew before the Final to ensure no issues during the main event. That allowed Greenemeier to control the race, which she did until the very end. Matthew Taskinen (Rolison Performance Group / Kosmic) put the pressure on late in the race. The two went side-by-side into the double left hand corners at the far end before tic-tac-toe. Both slide wide, allowing Carter Herrea to slip through. In his Rolison Performance Group / Kosmic debut, Herrea earned his first series victory. Greenemeier held on for second with Riley Dickinson (Orsolon Racing / Tony Kart) in third. Taskinen went off-road, and came back on to finish fourth heady of Payton Durrant (Koene USA / Tony Kart) 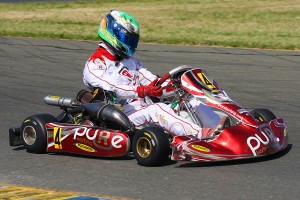 The victory in Shifter Senior went to Kolton Griffin after a hard-fought main event (Photo: SeanBuur.com)

Carlos Calderon was the quickest driver all weekend in the Cambrian Go-Karts Masters Max division. After contact in the Prefinal with eventual champion Mike Jones, Calderon started the 25-lap Final in seventh. Out front, Billy Cleavelin (Rolison Performance Group / Kosmic) led the way after winning the Prefinal, but was closely followed by David Pergande (Full Throttle Karting / Tony Kart). Calderon was charging forward aboard his Aluminos, and eventually caught the top-two after posting fast laps of the race by a half-second. Once around Pergande, he slipped past Cleavelin to drive away to a 2.3-second advantage for his first series victory. Cleavelin and Pergande rounded out the podium with Dallas Karting Complex / Sodi Kart driver Jones in fourth, clinching the championship. 2014 US Rotax Grand Nationals winner Ken Maxfield (Arrow) was fifth in his only weekend with the series. 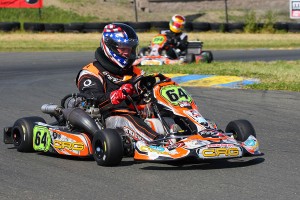 It was a battle to the very end in the Energy Kart USA Shifter Senior class with Kolton Griffin declared the winner. Three drivers fought through the Prefinal and Final, all evenly matched. Griffin (Pure Karting / Tony Kart) muscled his way to the point and the win in the Prefinal with Brett Buckwalter (Aluminos) dropping champion Jake French (Dallas Karting Complex / Sodi Kart) to third. They went at it again in the 25-lap Final, going three wide at one point. French emerged at the end with the point, crossing the line first but was penalized two position for contact. That awarded Griffin the win, his second in the series and put Buckwalter to second on the podium. Don Whittington (Pure Karting / Tony Kart) ended up fourth with Ben Schermerhorn (Birel ART) in fifth. Patrick O’Neill completed the sweep in the Dallas Karting Complex Shifter Masters division over his Ron White Racing / CRG teammate Kevin Woods. 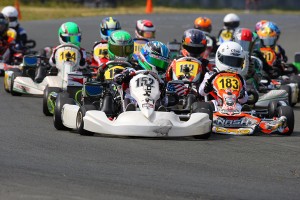 The day was a sweep for former Micro Max champion Jak Crawford, who controlled the Go Kart Hero Mini Max category from qualifying to the main event. After winning the Prefinal, it was a battle for the win in the main event as the Exprit driver had to fend off Dustin Salaverria (Nash Motorsportz / CRG) and Austin Torgerson (Ruthless Karting / Tony Kart). Crawford and Salaverria swapped the lead a number of times, while Torgerson waiting in the wings. At the end, Crawford was able to hold on for his second victory of the weekend. Salaverria crossed the line second but was penalized for contact with Crawford near the halfway point, thus falling to fourth in the final order. That moved Torgerson to second, helping him to claim his first series championship. Younger brother Ashton Torgerson (Ruthless Karting / Tony Kart) finished third. Josh Pierson (Rolison Performance Group / Kosmic) was fifth. 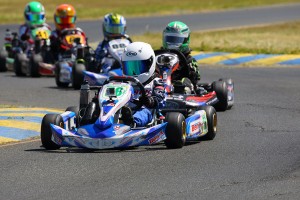 Diego LaRoque came away with the win in Micro Max (Photo: SeanBuur.com)

Ashton Torgerson helped his championship cause in the Ruthless Karting Micro Max division with the fast time in qualifying and winning the Prefinal. The main event was a battle throughout the 14-lap Final. Diego LaRoque (Benik) came out the winner, able to secure the lead in the final circuit and reach the checkered flag first. Torgerson (Tony Kart) finished second by under two-tenths of a second, yet clinching the championship. Carson Morgan (Benik) was third with Branyon Tiner (Tony Kart) fourth and Josh Pierson (Tony Kart) fifth.