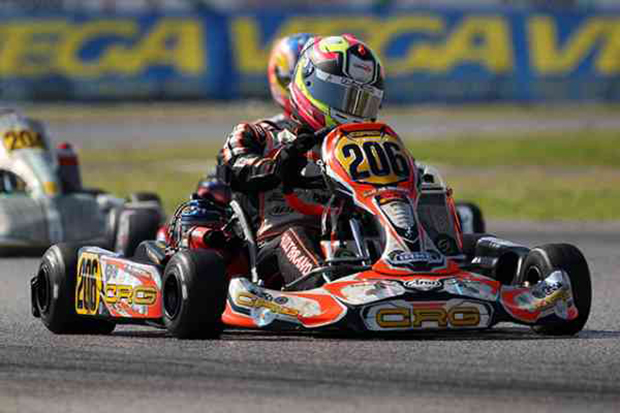 The third round of the WSK Super Master Series will take place at the International Circuit La Conca in the first weekend of April. CRG works team reaches this appointment as a protagonist in all categories.

The International Circuit La Conca of Muro Leccese will stage the third round of the WSK Super Master Series in the weekend of 1-3 April. CRG and its drivers reach this appointment as main protagonists of the event and OK classification leader with Pedro Hiltbrand.

CRG drivers have been shining in the new international class OK of the WSK Super Master Series. Despite the final results could have been better if it were not for some incidents like in the case of the latest race of Sarno, the competitiveness of the CRG chassis and Parilla engine has been high as the speed put in by the drivers, starting from the Spanish Pedro Hiltbrand, who is currently leading the classification thanks to two victories in the Prefinals of Castelletto and Sarno and a third place in the two Finals. Felice Tiene, the British Tom Joyner – very close to the victory in Sarno on Zanardi chassis – , the Finn Paavo Tonteri and the German Hannes Janker have also shown great speed. The objective for La Conca is to consolidate the classification and obtain some further prestigious positions that are definitely at reach of all CRG drivers.
The Dutch Team CRG Keijzer Racing will also compete in category OK with Richard Verschoor, Ido Cohen and Alexander Gaal.

READY TO ATTACK ALSO IN KZ AND KZ2

The fight for the victory of KZ is quite exciting and sees some CRG drivers in the front line. So far, Paolo De Conto, on CRG-Maxter, has obtained the best results for CRG colors, as he is third in the classification after the victory in the Prefinal and the third place in the Final of Castelletto and the third place in Sarno’s Prefinal and Final. Regarding the front runners, Flavio Camponeschi, on CRG-Parilla, is currently sixth in the standings. The Finnish driver Simo Puhakka is still a bit on the back but is recovering quickly, as the reigning World Champion Jorrit Pex of CRG Holland.

The KZ2 classification is led by Giacomo Pollini on CRG-Tm run by team Renda Motorsport, who is followed by Stan Pex of CRG Holland. A strong performance is also awaited in La Conca from the local hero Luigi Musio on CRG-Tm of Team Palmisano, and from Fabrizio Rosati on CRG-Maxter, who had an unlucky start.

The competitiveness of the Norwegian driver of CRG Dennis Hauger, who is at his first season in OK Junior after the move from Mini, is turning out to be more and more incisive. The objective of CRG drivers in this category is to recover some lost ground in the classification. Alongside the aforementioned Hauger, the British Teddy Wilson, the French Pierre-Louis Chovet who recently made his debut at the Margutti Trophy, and the Canadian Antonio Serravalle, on track with CRG Holland, will defend CRG colors in La Conca.

The CRG lot of 60 Mini is ready to shine with private teams. Leonardo Bizzotto of Team Morsicani is in fact third in the championship, while Riccardo Camplese and Evann Mallet of Team Gamoto are respectively ninth and tenth.