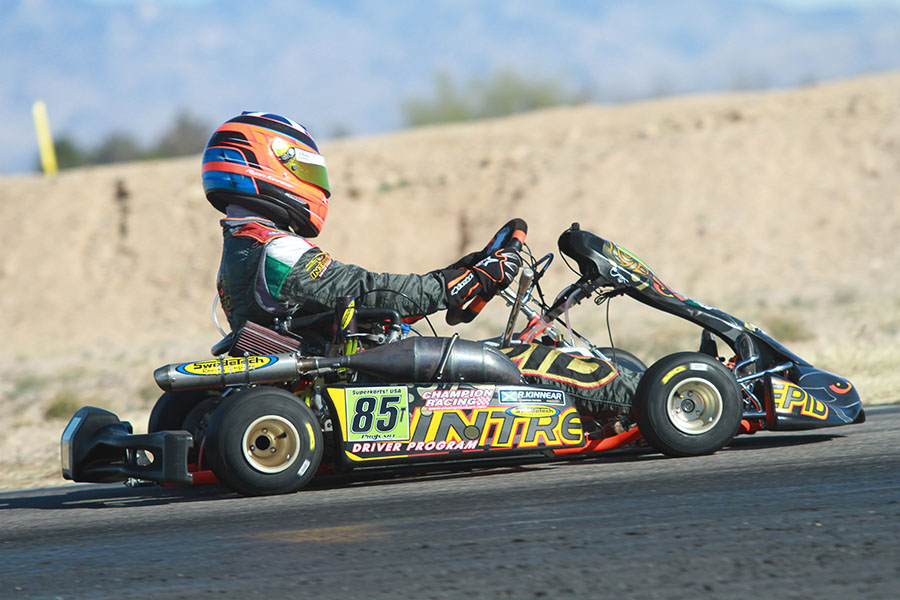 Ryan Kinnear is the defending US Open Shifter Masters champion and currently leads the Challenge of the Americas standings (Photo: eKartingNews.com)

Champion Racing and Intrepid have been a mainstay in North American karting. The long-lasting partnership continues into the 2016 season with a prime roster of drivers set to compete under the Norman, Oklahoma-based operation throughout the national karting schedule here in the United States. Intrepid maintains its strive at being an innovator in the sport of karting, with owner Mirko Sguerzoni re-establishing a new era of the Intrepid brand with the same desire to be the best. Champion Racing backs that commitment here in the United States, stacking the deck with a driver roster geared to success.

“We love to win here at Champion Racing, and that is our goal in 2016,” stated Champion Racing team manager Rodney Berryhill. “The Intrepid product is the best out on the market, no matter the class, the tire, or engine. We have proved it year after year, and it is our goal to win as much as possible where ever we go this season. The new Intrepid factory in Italy is manufacturing quality product, and our great dealer network is putting it in the hands of the racers. Our national race team is charging back after regrouping last season, and there could be no stopping this collection of drivers and dealers we have in 2016.” 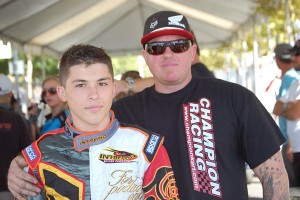 Jarred Campbell makes his return to Intrepid for the 2016 season with Champion Racing (Photo: On Track Promotions – otp.ca)

Making a return to the Intrepid brand is former SKUSA SuperNationals winner Jarred Campbell. The Northern California pilot shined as a Junior driver and in his rookie Senior season aboard the Intrepid brand. Campbell was the 2013 SKUSA Pro Tour S5 Junior Stock Moto champion, and won the 2014 edition of the SuperNationals in the S2 Semi-Pro division. Jarred is also the 2015 California ProKart Challenge champion, set to compete in his second S1 Pro Stock Moto season in 2016.

Joining him in the S1 Pro division for 2016 with Champion Racing and Intrepid is four-time Rotax Grand National champion Nick Neri. Among one of the most decorated karters in the last decade, the Florida native is returning to the national karting scene behind the wheel of a Champion Racing / Intrepid. Neri won the S2 Semi-Pro division at the SuperNationals in 2011 and finished third in the SKUSA Pro Tour standings in his only season in the S1 division. 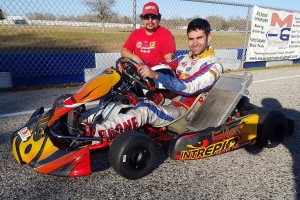 The S2 contingent under the Champion Racing tent continues to make strides, with early success already in 2016. Harry Gottsacker will lead the squad, coming off top-five performances at the Challenge of the Americas, including one podium in four main events. Intrepid dealers 3G Kart Racing and Crockett Motorsports are fielding Garrett Boone, Cody Elliott and Jenna Grillo. Boone is returning back to the seat after sitting out most of 2015, primed to be one of the most experienced drivers in the category and certainly an asset to the entire Champion Racing / Intrepid tent.

Experience is also in the Master Stock Moto lineup with Ryan Kinnear being joined by 3G Kart Racing’s Jordon Musser. Kinnear is coming off an inaugural championship at the US Open in 2015, and the current championship leader in the Challenge of the Americas program. Musser is moving back to the Intrepid chassis with support from Champion and 3G Kart Racing with the 2014 SKUSA Pro Tour champion and four-time Rotax Grand Nationals winner primed for another title chase. Scott Barnes is flying the Crockett Motorsports colors aboard an Intrepid chassis again in 2016, ready to become a regular front runner in the S4 category. 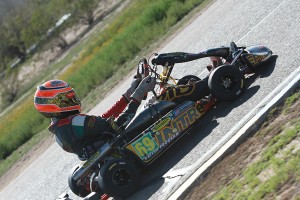 Tim Meyer has already put in a solid effort for the first quarter of 2016 in TaG Master competition on the west coast. The Atomic Karting driver has recorded two runner-up results at the California ProKart Challenge, and is among the contenders entering this year’s Pro Tour. Bryce Cornet and Michael Bartholomew are set to put Intrepid near the front of the TaG Senior field throughout 2016, each with a stellar racing record regionally. Cornet has been racing with Champion Racing for 17 years, and won the Senior Shifter US Open finale in Las Vegas. Bobby Kelley will represent new Intrepid dealer Kimball Williams Racing in Southern California, already picking up wins in club and regional competition.

The success of Champion Racing and Intrepid here in North America karting stretches over two decades. A two-time Super Kart Illustrated Team of the Year, Champion Racing has helped garner a number of drivers to victories and championship across the continent. The support staff under Champion Racing holds nearly a century of experience with Rodney and Brett Berryhill, Jordy Vorrath, and the top figureheads of the dealers involved in helping to grow the Intrepid brand across North America. Champion Racing would also like to recognize Innovative Karting in Arizona and Texas Karts for their commitment and support of the Intrepid product, as they continue to provide high-quality customer service for racers in their regions. 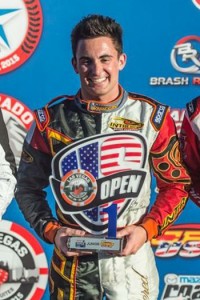 Champion Racing has chassis sales, Arrive-N-Drive options, or travel packages available throughout the 2016 season with schedule trips to the full Superkarts! USA Pro Tour, US Open, and Texas ProKart Challenge, with programs available to fit your schedule and needs. To find out more about the Intrepid brand or working with Champion Racing, visit www.championkart.com, email info@championkart.com or contact Rodney Berryhill at 405-464-0858.

About Champion Racing:
Champion Racing, located in Norman, Oklahoma alongside the Oklahoma Motorsports Complex, has a long history as one of the most respected shops and teams in the sport. The North American importer of the Intrepid kart line runs a national-level arrive-and-drive racing team. Champion Racing is also well-known for their engine building performance.  In both 2006 and 2007, the team won the prestigious eKartingNews.com Team of the Year Award.