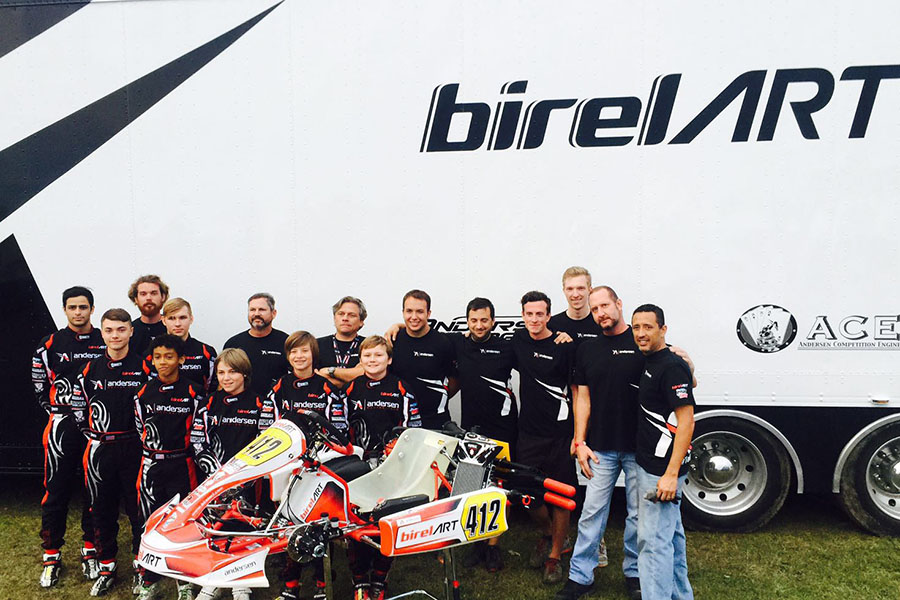 With the 2016 Florida Winter Tour Championship in the books, the Andersen Racing Team finished the winter season in strong fashion. Having entered a total of 8 drivers in the championship round, there was ample opportunity for strong results for the Palmetto, FL based squad.

The weekend at Palm Beach International Raceway did not start on a positive note, however, for one of Andersen’s lead JR drivers Harry Coulton. After completing only 3 laps in the first practice session on Wednesday, Harry was forced to retire from the weekend with a fractured rib cage. Luckily Harry was cleared from the hospital, but with a strict order to stay out of the seat to heal, the young talent was not able to contest the remainder of the weekend.

As for the team’s other Junior Max drivers, the weekend progressed fiercely. Colt Hensley, the team’s youngest driver, took to the track on a mission to improve. After cutting his lap-time by over 2 seconds in free practice, Colt went on to finish 17th in the pre-final. Unfortunately after a turn one incident took him out of contention, the rookie from Sebring, FL was only able to manage a 34th place finish which was a blemish on an otherwise stellar weekend.

Another rookie on the team, Tomasin Brennan, showed her potential all week. After being up as high as 13th in the main event, she was able to bring her Birel-Art kart home in 26th place, a massive improvement in only her 2nd race ever.

Kai Palomino, the 13 year old from Miami, FL, had stellar speed throughout free practice, but after a series of lap one incidents, Kai was forced to retire his kart from the final. Look for Kai’s name at the top of the charts later on this 2016 season.

Last but certainly not least, Andersen’s Aidan Keel nearly came home with the FWT championship. After a mild qualifying result, the Plant City, FL native was able to battle back to come in second place in the Final. The result was nearly too close to calculate, but in the end the Keel missed out on the crown by just 50 championship points.  Keel’s result not only highlights the effectiveness of Andersen’s driver development program (Aidan being just 14 years old), but also the strength of the Birel-Art chassis.

In the Senior Max category the Team had a single entry in the form of Rookie driver Austin Bialaski. Austin overcame many hurdles throughout the weekend, finally coming home in 13th position in the main event. This being only Austin’s first international level championship, his progress suggests that great things are to come in his future.

In the DD2 category, Andersen entered 2 drivers Michael McCarthy and Dev Gore. The pair were fast all throughout free practice and were even in title contention at various points during the weekend. Finally, after a plethora of protests and post race drama, McCarthy came home with the final step of the podium after starting dead last and Gore followed behind in 4th place. Had it not have been for some unnecessary politics, Gore would have claimed 3rd in the championship.

With hardware in hand and nearly an FWT title, the Andersen Racing Team left Palm Beach with great momentum. The team would like to thank its partners as well as it’s mechanics without whom nothing would be possible.

To start or refine your career in motor sport, contact the Andersen Racing Team at 1.941.723.3900 or visit us online www.AndersenRacingTeam.com