The 2016 season is set to continue for the World Karting Association Bridgestone Manufacturers Cup Series with the running of the Praga North America Nationals. Racers from across the eastern half of the United States will converge on the popular GoPro Motorplex on April 1-3 in Mooresville, North Carolina. WKA is coming off a successful inaugural Winter Cup program that began with the Daytona KartWeek event, traveling to Jacksonville and ended with a trip to GoPro Motorplex at the start of March. Racers were able to keep busy during the cold months, and prepare even more for a championship run at the Manufacturers Cup Series program. 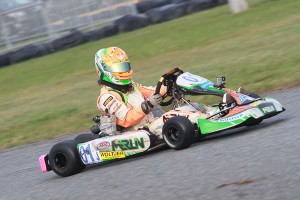 The KartSport North America Pro IAME Senior division saw two different winners with Elliot Finlayson and Brandon Jarsocrak taking top honors at the opening event of the championship chase. Finlayson came out of Daytona as the point leader, but due to school and schedule conflicts, is unable to compete in Mooresville. The Illinois driver still has a shot at competing for the title should he elect to contest the three remaining events and do well, thanks to his solid Daytona KartWeek performance. His absence promotes WKA Winter Cup champion Brandon Lemke as the top driver in the standings, coming off a runner-up finish in Daytona with two fast lap honors in the two main events. Florida driver Jonathan Kotyk was Round One runner-up, looking for a better result this weekend. Jarsocrak enters the weekend fourth in the championship chase, just 20 points back of Lemke. Throwing in the mix is former national champion Jake Craig making his series debut, sure to be among those battling for the win on the weekend.

Alex Bertagnoli and Lance Fenderson split the wins in the Woltjer Racing Engines Pro IAME Junior category in Daytona. Bertagnoli, with a 2-1 finish result, holds the championship lead heading to Mooresville. The gap is just 40 points over Round One winner and Winter Cup champion Fenderson, who calls the GoPro Motorplex home. Pauley Massimino, another driver to call Mooresville his home track, finished runner-up in Round Two behind Bertagnoli, trailing in the standings by 45 points. The field is expected to outgrow the Daytona count of 19, with 16 drivers already pre-registered.

Two runner-up results at Daytona for Jason Welage has him as the championship leader in the IAME USA East Pro Swift Sportsman. Welage, the Winter Cup champion, leads by just 20 points over Daytona winners Ugo Ugochukwu and Connor Ferris. Both drivers recorded a first and fifth place effort back in December, however, Ugo is not scheduled to be in attendance at Mooresville. Ferris earned two wins in the Winter Cup program, matching that recorded by Welage. Luca Mars landed on the podium in Round One, looking for more this weekend to move up the standings from his fourth position. 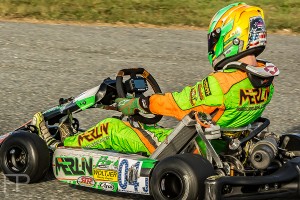 Dakota Pesek and Nick Landi were the two different winners in the Fullerton Karts USA Yamaha Senior division back in Daytona. Pesek won Round One with Landi bagging the victory in Round Two. A runner-up on day two for Pesek helped him leave Daytona KartWeek as the championship leader, leading Landi by 35 points. Third sits Senior rookie Brandon Lemke, a former Triple Crown winner as a Junior driver. Lemke secured the fast lap in both main events in Daytona, and will try for his first victory in class. Braden Eves is another Senior rookie, sitting fourth in the standings with last year’s IAME Senior champion Alexander Kardashian in fourth. The category looks to eclipse the 14-entry mark from Daytona with 10 already registered before at-track entry begins.

Alex Bertagnoli leads the second Junior championship, the FranklinKart.com Yamaha Junior division. A victor and fast lap on day one was followed up with a third-place effort and fast lap honor in Round Two for the Illinois driver. His advantage is 60 points over Ohio pilot Marina Walters, who placed a Daytona-best of third in Round One. Spike Kohlbecker was the victor on day two, and sits third in the points with Sam Paley, Lance Fenderson, Tyler Ferris and Pauly Massimino all right there and set to improve their position in Mooresville.

The Allison Racing Engines Yamaha Sportsman saw two different winners in Daytona as well. Robert Noaker III and Luca Mars split the victories in December. Mars won Round One with Noaker taking the checkered flag in Round Two, and leads the championship thanks to a runner-up finish the opening day. Mars trails by 50 points with Jason Welage matching his same point total with two podium finishes of his own. Connor Ferris, Kaden Wharff , Taylor Maas and Madison Campeau all were in the hunt at Daytona, and round out the top-seven in the standings. 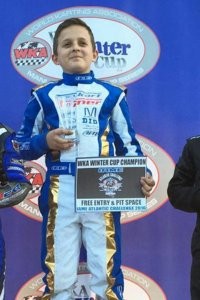 Jeremy Fletcher earned both checkered flags at Daytona KartWeek in the CRPRacing.com Mini Swift class. The Florida driver holds a 100 point advantage over Perra Granger and Nicholas Terlecki. Winter Cup champion Brent Crews and title contenders Caleb Gafrarar and Eli Trull are expected to be among those fighting for podium positions in Mooresville.

Ten drivers are already registered for the Water For a Cause Kid Kart class at GoPro Motorplex, including championship leader Austin Olds. The Round Two winner leads by 60 points over Ava Dutton and Karsyn Walters. Round One winner Indy Ragan is fifth in the standings, just behind Preveil Perkins.

Friday, April 1 will serve as official practice day with all eight categories, including the Local Option 206 class taking part on the weekend. Saturday, April 2 is Round Three with a full day of action, including warm-up, qualifying, two heat races and a main event. Sunday, April 3 is Round Four, with a repeat format from Saturday. eKartingNews.com will have the event report following the weekend, featuring the top performers at the Praga North America Nationals at the GoPro Motorplex. For more on the event in Mooresville, North Carolina, visit the WKA Entry Form for specific details and the Manufacturers Cup Series page at worldkarting.com for more on the 2016 season.