Round Three On Deck for California ProKart Challenge 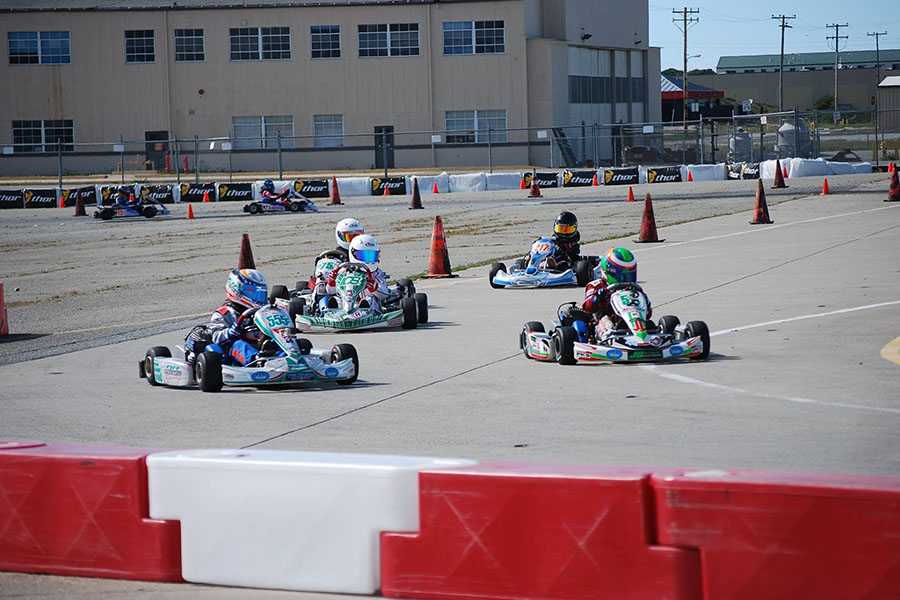 California ProKart Challenge is set to make only its second visit to the Monterey Bay Karters facility in Marina, California on April 1-2 (Photo: MontereyBayKarters.com)

The California ProKart Challenge is set to journey north, scheduled to host Round Three of the 2016 championship series at the Monterey Bay Karters facility on the grounds of the Marina Airport. On April 1-2, Superkarts! USA will make only its second visit to the northern California circuit, with the first trip dating back to 2011 with the California ProKart Challenge North series. At just over a 1/2-mile, the ‘Enduro Track (B)’ layout will challenge all 11 categories set to continue their championship chases along the Pacific Coast.

Only 30 points separate the two different winners thus far in the 2Wild Karting S1 Pro Stock Moto standings, as former two-time champion Billy Musgrave holds the advantage. The Round One winner leads over Round Two victor Jimmy McNeil, each performing a sweep in their triumphs. Last year’s champion Jarred Campbell is the top challenger with one podium, matching that of former series champion Jacob Neal, who sits fourth in the point standings. Defending series champion Christian Brooks elevated himself to the top of the standings in the Phil Giebler Racing X30 Senior category. Brooks won both heat races and the Final in Willow Springs to establish a 40-point lead over NorCal pilot Phillippe Denes. Round One winner David Vasquez sits third, with Billy Musgrave fourth – within 100 points of Brooks.

A new driver sits at the top of the Leading Edge Motorsport S2 Semi-Pro Stock Moto division after two events, with the top five all within 100 points of each other. Hunter Pickett has ripped off two straight podium finishes and enters Round Three as the points leader. Sixteen markers back is S3 transfer Robert Heck Jr., while S5 graduate Hunter Kelly is just four points behind him in third. Round One runner-up Will Preston and race winner Callum Smith are still within striking distance after scoring low points last month.

Victory in Willow Springs has put John Crow as the target in the Vemme Kart/Extreme Karting X30 Master class. Crow won all three races in Willow to establish himself as the championship leader. Round One winner Mike Rolison is second, but will be missing the Monterey event, making two-time runner-up this season Tim Meyer as the lead challenger. Last year’s vice-champion Brian Phillipsen sits fourth, thanks to two top-five performances in the opening two rounds. Darren Elliott has been near perfect through the first two events of 2016 in the Nash Motorsportz S4 Master Stock Moto class. The defending series champion missed out on the top spot in qualifying at Willow, finishing at the top of the results sheet in all other sessions to build a 100-point advantage in the standings. Alan Michel has two podium results and enters Monterey second in the standings ahead of Robert Marks.

The Outsource Utility Contractor S3 Novice Stock Moto class continues its growth, now up to 17 racers after just two events. Garrett McKelvie continues to lead the championship chase, having won at Round One. His advantage grew to 110 points with a runner-up finish at Round Two, leading Adrian Yong and recent winner Royal McKee. Ken Schilling has a perfect record on-track in the Mike Manning Karting S4 Super Master class, as the defending champion leads Darrell Tunnell by 95 markers, with Luke Bianco in third.

Ryan Perry Motorsport X30 Junior rookie Tomas Mejia finds himself as the top driver in the championship chase. His first podium result of 2016 at Willow Springs helped to advance him above Round One winner Dante Yu by 21 points. Fellow Junior rookie Oliver Calvo is just two points back in third, with Round Two winner Zoey Edenholm and Jagger Jones sitting within 40 points of Mejia entering Monterey. Dean Heldt has two wins in two races, and leads the RPG S5 Junior Stock Moto division over Ricco Shlaimoun.

The Professional Kart Support Mini Swift investigation over the first two rounds is completed, with the points released showing defending champion Anthony Willis as the leader. A victory at Round Two help move him up to the top, leading by 115 points over fellow Arizonian Jace Jones. Round One winner Dominic Gorden sits third, with Cole Cotham and Jalen Mack there within striking distance but needing more success in Monterey to close the gap. Round Two winner Kai Sorensen sits atop the Top Kart USA Micro Swift standings, leading by 105 points over Cooper Hunt. Round One victor Kailey Meris is third entering Monterey, with Carson Kragh in fourth.

Registration remains open until Tuesday, March 29 at the online registration section of the Superkarts! USA website – offering the discounted price of $325 for entry and stamped race tires. Move-in begins on Thursday, March 31 at 1pm. On Friday, the California PKC registration desk opens at 7:00am, with the official practice day beginning on track at 9:00am, running until 5:00pm. Pit spots will need to be reserved with California PKC – with different rates for different sizes available for purchase in the online store. Please see the event page for the hours that the gates open and close each day, as the facility is located on airport property. No alcohol, motorized or non-motorized vehicles are allowed on the premises. No specific host hotel has been named for the event. However, there are some recommended hotels, along with on-site camping information, additional race and venue details, and a tentative weekend schedule posted at the California PKC Event Page and also at the Monterey Bay Karters website.

Superkarts! USA would like to remind California PKC competitors that the spec fuel and oil is not provided by PKC. Please plan accordingly to pre-order from your local kart shop, or bring a sufficient supply of both for the weekend. Another reminder is drivers who competed at the first two rounds of the series can continue their path to qualify for the Priority Pre-Entry Program for the SKUSA SuperNationals XX by entering and competing at the first four California PKC races in 2016. Don’t forget to stick around after all the on-track activities have completed for the post-podium raffle drawings. Superkarts! USA handed out more than $3,000 in prizes at Buttonwillow and Willow Springs.