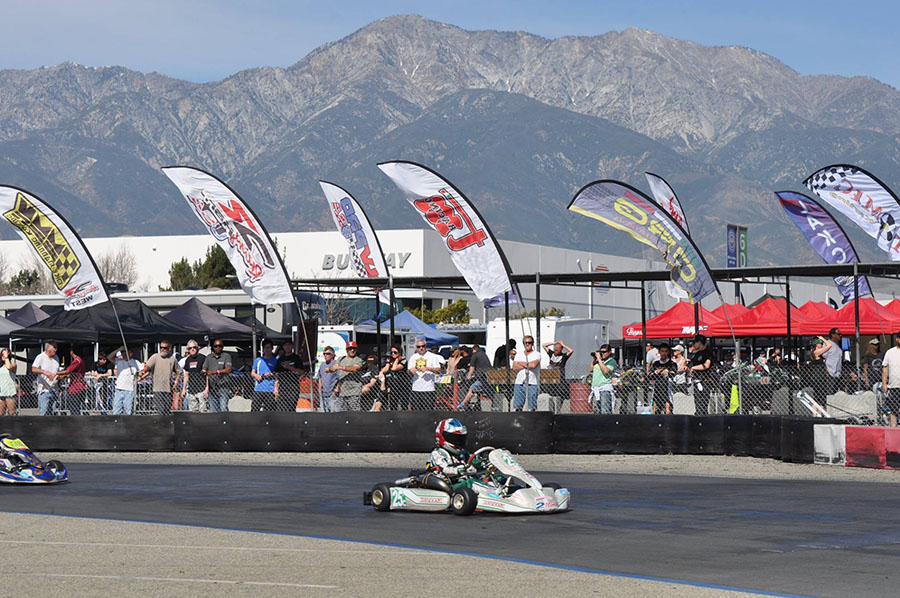 The Los Angeles Karting Championship continued on with its 2016 season by hosting the second round of the year at the CalSpeed Karting facility in Fontana, California. Nearly 175 entries took on the ‘Tecnico’ course under perfect weather conditions, including a number of the best drivers in California and from the Superkarts! USA Pro Tour. The 2016 marks a new era for the LAKC program, with a number of new and exciting additions coming in the future. For the racers on March 13, it was about gaining a victory or scoring as much points with the championship chase now underway.

The largest class of the weekend was the 2 Wild Karting TaG Senior division, welcoming 30 drivers in the field and dominated by drivers making their 2016 debut. Bobby Kelley opened up the day as the top-qualifier with a 42.128-lap to secure the pole position over Carlee Taylor and Billy Musgrave. Kelley led the first six laps until a charging Jake Craig, also making his 2016 LAKC debut, took over the top position. On the final lap, Kelley came back to steal the lead and the win. Craig took the lead to begin the main event from outside row one. Kelley lost the second spot on the opening lap from Musgrave, and continued to fall down the order throughout the 18-lap event to finish 10th. At the front, Craig led wire-to-wire for the victory. The battle for second went to veteran Chris Wehrheim, moving around Musgrave in the late stages of the race. Round One winner Nicky Hays drove to fourth with Colby DuBato in fifth. 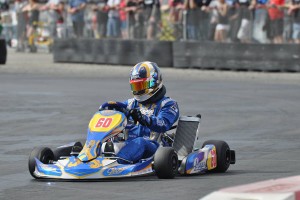 The Junior 1 categories saw Carson Morgan double up in the win column. First came the win in the Fleming Racing Engines Junior 1 Comer category. Morgan was fifth in qualifying as Aden Dodge set the pace for the 20-driver field as the only driver below the 48-second mark (47.746). Morgan charged forward in the 10-lap Prefinal, edging out Dodge by just 72 thousandths at the line for the win. He then went on to lead 17 of the 18 laps in the Final for his first victory of the season. Round One winner Cole Keith Cotham ran second with Rylee Martinez, the only other leader in the race, placing third. Dodge and Jalen Mack completed the top-five.

Morgan then went on to sweep the day in the P1 Engines Mini Swift division. The top three were separated by just 35 thousandths in qualifying with Morgan on top with a 46.225-lap, quicker than Cole Keith Cotham and Dakota Tate. Morgan led all 10 laps of the Prefinal, stretching out to a four-second advantage at the line. It was a similar gap in the 18-lap Final, as Morgan went wire-to-wire for the first in class on the year, second on the day. Daniel Inzunza drove to second with Tate third, Cotham fourth and Jalen Mack in the fifth position. 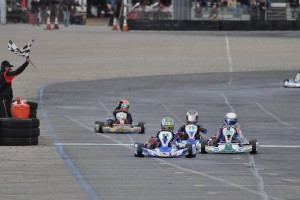 Carson Morgan doubled up in the win column at Round Two, including a victory in Junior 1 Comer (Photo: Kart Racer Media)

The Musgrave Racing Company S3 Novice Stock Moto class has helped to continue the growth of shifterkart racing at LAKC, with a solid group of drivers contesting this year’s championship. Garrett McKelvie earned his first series victory of the season, sweeping the day over the 10-driver field. McKelvie secured the pole position solidly with a 42.080-second lap. A comfortable seven-second win in the Prefinal was followed up by a battle with Round One winner Royal McKee for the feature victory. McKee led the middle portion of the Final, only to see McKelvie lead the final eight laps for his first victory of the season. Adrian Yong finished third behind McKee with Jacob Pope and Prescott Campbell completing the top-five.

John Crow made it two straight in the Mike Manning Karting TaG Master division, sweeping the day for Round Two over the 12-driver field. Crow posted a 43.183-second lap to secure fast time in qualifying, and lead comfortably in both the Prefinal and Final for the win. Tim Meyer drove to second in his series debut for 2016 with Travis Irving completing the podium. Gary Lennon was fourth with Roy Steele in fifth. 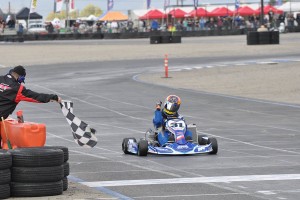 Ryan Schartau became a first time winner in the Ryan Perry Motorsport X30 Junior division. Schartau, a rookie Junior driver, found himself fourth in the qualifying session as Dante Yu set the fast time. Yu led all 10 laps in the Prefinal while Schartau finished fifth. The Final was a battle between Yu and Jagger Jones for the lead, with Schartau moving up to the third spot by the midway point. On the final lap, the fight intensified with Schartau able to make it from third to first before the checkered flag to claim the victory. Yu ended up second with Jones third as Round One winner Trey Brown and Keawn Tandon rounded out the top-five.

The Mack Motorsports PRD Junior 2 class was a two-driver battle with Mia Butts coming out on top. She would sweep the day, but not without a challenge by Round One winner Jordan Turner. Butts set the fast time in qualifying, but fell back to second early on in the Prefinal. Turner led the first half with Butts retaking the lead and the win. It was a similar look in the Final, as Butts retook the lead from Turner on lap 10 and never relinquished it to the checkered flag. Turner settled for second with Rico Shlaimoun joining them on the podium. Alex Siragusa was fourth with Brendon Cramer in fifth. 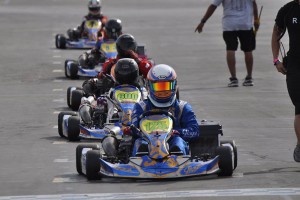 Another 10 driver field in the freem Honda Kid Kart division were part of Round Two, welcoming a second different winner on the season. Logan Ainsworth swept the day, putting himself in early contention for the series championship. Ainsworth put down a solid time in qualifying to earn fast lap honors and led all eight laps of the Prefinal, edging out Round One victor Brodey Vicars at the line. It was a similar finish in the Final, this time with Vicars leading the middle portion of the race. Ainsworth took over the point and once again beat Vicars to the checkered flag by 98 thousandths of a second. Drake Cardey was third with Alex Saga and Logan Chambers completing the top-five.

Larry Hayashigawa made his PKS S4 Super Master Stock Moto debut at Round Two, setting the fast time in qualifying. The field of eight were close in times, and Chris Curtis came out of the Prefinal with the win. He continued at the front, driving away to a six-second advantage for his first win of the season. Philip Serniak was second with Troy Starheim third, just ahead of Hayashigawa and Warren Kindberg. 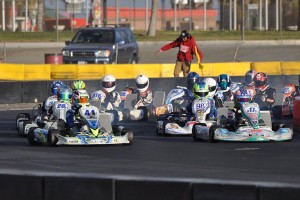 Slava Prikhodko made it two straight wins in the Phil Giebler Racing Open 125 Shifter class. Prikhodko secured the victory in the Final, taking over the top spot with three laps to go from Prefinal winner Tyler Coffman, who retired early. The margin was five seconds at the checkered flag for Prikhodko ahead of top qualifier Willy Axton. Troy Butts completed the podium while Carlos Gonzales and Jason Chott finished fourth and fifth.

The Empire Karts Micro Swift was a battle all day long. Frankie Mossman came away the victor, leading all 15 laps of the Final. Round One winner Cooper Hicks, the top qualifier, drove his way to second over Tuesday Calderwood. Dane Idelson beat out Prefinal winner Jesus Vasquez Jr. for the fourth position.

Riley Dugan extended his championship lead in the iKart West PRD Senior Pilot division with a sweep of Round Two. Dugan drove to a 17-second victory in the Final after earning fast time in qualifying and winning the Prefinal. Ian Bland and Sierra Hudson joined him on the podium with Jacob Linton fourth and Ashon Bashkar fifth. 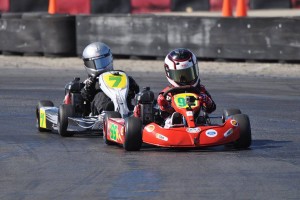 Logan Ainsworth was on top of the results sheet in Honda Kid Kart throughout Round Two (Photo: Kart Racer Media)