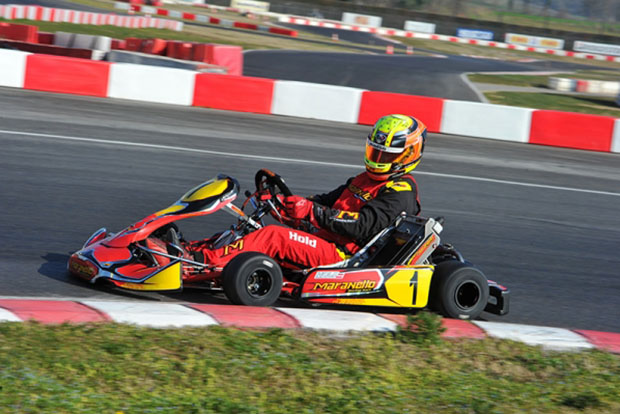 Massimo Dante confirmed to be victorious in KZ2. Great fourth place for Christoph Hold. Andrea Spagni forced to the retirement. Victories in Prodriver Under to Roberto Cesari and in 125 Club to Davide Micheletti.

Maranello Kart had good success in the first round of the 27th Spring Trophy held in Lonato, as its drivers showed their speed in the national categories, starting from KZ2 where Massimo Dante secured the victory with the assistance of SG Race led by Stefano Griggio and that of Rizzi for TM engines.

The crowded round of Lonato registered a participation record of 293 drivers in the 11 categories on track.  Massimo Dante repeated his success in the first round of this early season trophy after winning last year all the three trophies held in Lonato: namely, the Spring Trophy, Summer Trophy and Autumn Trophy.

The Austrian driver Christoph Hold, on Maranello-Modena with the assistance of Maranello Austria and of SRP for engines, found his place among the protagonists of this first round of the Spring Trophy in KZ2, as he ended the Final in fourth place after a crescendo of results started from P13 in qualifying.

Andrea Spagni‘s debut with the official colors of Maranello Kart  has been quite unlucky instead, as he had to retire in the Final due to an incident after a good P9 in Prefinal.

Maranello Kart scored another win in Prodriver Under, as Roberto Cesari ended the Final on top, on Maranello-Tm, after being second in Prefinal and setting the pole position in qualifying. Luca Bombardelli has also been among the protagonists. He was seventh in Prefinal, but then had to concede some positions in the Final, where he had eventually to settle for P14. Marco Dalle Vedove put in a great recovery race ended in P7, improving his Prefinal result by ten places.

Cristian Griggio and Fabio Danti, both on Maranello-Tm, fought for the podium of Prodriver Over, but ended respectively in fourth and fifth position. Danti has also been one of the quickest in qualifying, as he posted the second time that was only 80 thousands of a second shy of the pole position.

The third victory of the Maranello Kart’s weekend came from 125 Club thanks to Davide Micheletti, on Maranello-Maxter, who secured the win of both the Prefinal and the Final.

A podium was also obtained in 60 Mini by the young Austrian Lukas Zbul, who was third in the Final with the assistance of Team Maranello Austria.

Rok Mini, that had 63 driver at the start, saw Lorenzo Marin putting in a great performance on Maranello-Vortex run by KCL Racing. He was third in his qualifying group and then seventh in the Final after a brilliant tenth place at the end of heats. Brando Pozzi just missed out in earning his pass to the Final instead, as he was 35th after the heats due to a retirement in one race. Pozzi scored two promising results in the other two heats ending 12th and 10th.

The 2016 Spring Trophy will reach its conclusion on April 2-3.