CRG on the WSK Podium with Hiltbrand, De Conto, Pollini and Bizzotto 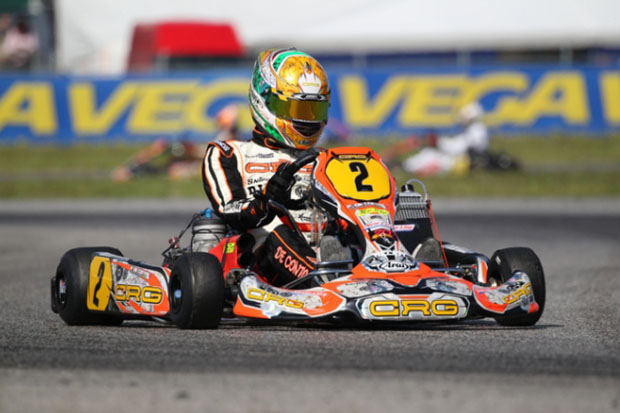 Tiene has been the main protagonist of OK but was pushed off track in the Prefinal, Hiltbrand confirmed his classification lead with the victory in Prefinal and the third place in the Final. De Conto on the podium of KZ, Pollini winning KZ2. Bizzotto third in Mini.

CRG only missed out on taking the victory to be completely satisfied at the end of the second round of the WSK Super Master Series but, in the end, several important podiums were obtained as the one secured by Pedro Hiltbrand in OK. He was third in the Final after winning the Prefinal. These results confirmed his classification lead.

HILTBRAND ON THE PODIUM OF OK

OK has been bitter-sweet in the Prefinal, where a great performance was awaited by Felice Tiene, on CRG-Parilla, after the victory in two heats on Saturday placed him among the main favourites for the victory in the final stages. The Italian driver of CRG was about to take the lead in the Prefinal, but was sent off track due to a hard and quite dubious contact by his direct rival. As Tiene was out of the Prefinal, Pedro Hiltbrand managed to take the win at the end of a great comeback race that earned him 40 precious points for the Championship. In the Final, Tiene was involved in an early incident, while Tom Joyner (Zanardi) turned out to be very competitive on top but had to give his victory hopes up in the last lap due to an engine problem. Hiltbrand gained therefore another precious third position behind Travisanutto and Novalak. The third place confirmed CRG driver’s lead in the series’ standings after two rounds.

The German of CRG Hannes Janker ended with a great seventh place, the Finn Paavo Tonteri was 15th and the Israeli Ido Cohen 16th. The Dutch Alexander Gaal of CRG Keijzer ended his effort in 19th place due to a 10 seconds time penalty.

Paolo De Conto (CRG-Maxter) obtained the podium of KZ after a great battle, that made him close behind Ardigò and Abbasse, while Jorrit Pex of CRG Holland showed great speed taking a good fifth place at the end of a stunning comeback race. Flavio Camponeschi (CRG-Parilla), third in Prefinal, was among the main protagonists taking a good eighth place in the Final, as was Simo Puhakka (CRG-Maxter) who ended 11th.

Giacomo Pollini, on CRG-Tm run by team Renda Motorsport, got the highest satisfaction of CRG’s lot in KZ2. He was 12th absolute but got on the top step of the podium of the smaller category after the victory scored last Sunday at the Andrea Margutti Trophy and the third place at Castelletto’s round of WSK. Pollini proceeded Mauro Simoni (DR) and Luigi Musio on CRG-Tm run by Team Palmisano in the KZ2 Final. Thanks to this victory, Pollini is the new leader of KZ2. Fabrizio Rosati was 21st absolute and eighth in KZ2 on CRG-Maxter.

HAUGER SLOWED DOWN IN THE OK JUNIOR FINAL

CRG drivers had a troubled weekend in OK Junior. The Norwegian Dennis Hauger, on CRG-Parilla, was the most productive of the lot and was the only one making it to the Final. Unfortunately, Hauger got stuck in an incident at the first lap, but managed to rejoin and closed his race in 15th place. Gianluca Petecof could not get access to the Final due to a 10s penalty in the Prefinal, which was a pity as the young Brazilian had shown great speed. The Canadian Antonio Serravalle and the British Teddy Wilson could not run the Final either.

BIZZOTTO ON THE PODIUM OF 60 MINI

Leonardo Bizzotto obtained a very good podium in 60 Mini with Team Morsicani. He was third behind Minì and Paparo. Riccardo Camplese was also among the quickest and ended sixth with Team Gamoto.

Dino Chiesa, CRG Team Principal: “Junior kicked off very badly due to qualifying held on the dry and wet mixed conditions. Our drivers were quite unlucky and had to start from the back. If you start behind the race becomes really difficult. Laptimes were good, but when one starts from the back a lot of pitfalls might be ahead. The victory in OK slipped off Felice Tiene’s hands first, and Tom Joyner’s then. Tiene had an incident in Prefinal, while Joyner suffered an engine problem during the last lap when leading the race. Only consolation is that Pedro Hiltbrand confirmed his classification lead with the victory in Prefinal and the third place in the Final. We are working to improve in KZ, we have always been among the front runners and scored a great third place with Paolo De Conto. We are always among the protagonists.”

Paolo De Conto, KZ: “We just missed the win by a whisker. We improved a lot after setting up the engine this morning with Savard, but something was still quite not right. In Prefinal and in Final I have been more competitive and I am happy for the podium anyway.”

Pedro Hiltbrand, OK: “We had some difficulties in the Final, but the victory in the Final was quite square. We still have some work to do ahead of the next round of La Conca to be even more competitive. Our objective is now to win the Championship.”