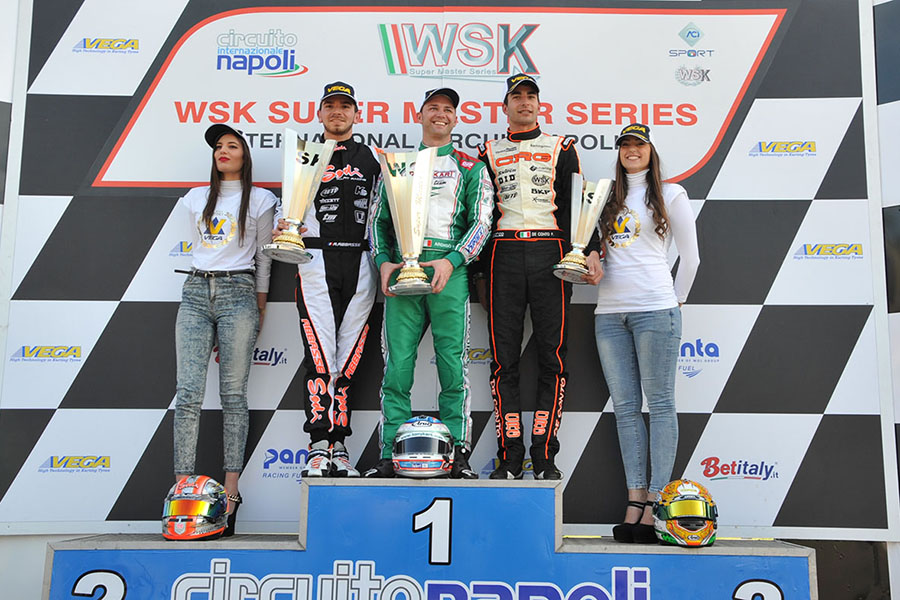 The springlike temperature at the International Circuit Napoli was the ideal background for today’s races. The final phase of the second round of the WSK Super Master Series was rich of eventful races. The Finals were often decided on the last laps and with unpredictable results. All these gripping moments will be at the disposal of fans on the Internet thanks to the official WSK website wsk.it which, after hosting the live streaming of the event, will keep the images of the races available on-demand.

The Sodi Kart platoon was to be feared, but the Italian Marco Ardigò (Tony Kart-Vortex-Vega) was able to respond to Jeremy Iglesias, Bas Lammers and Anthony Abbasse (all on Sodi-TM-Vega). At the start of the KZ Final, Ardigò is in fourth behind his opponents, who tried to pull away. After an impressive series of overtakings, the Italian driver managed to grab the head of the race. The French Abbasse, eventually, was able to beat his two team-mates and to be the runner-up. Third position for the Italian Paolo De Conto (CRG-TM-Vega).

Pollini is surprising in KZ2

He managed to gain the top positions on the starting grid of the race which groups together the KZ and KZ2 categories. Then, Giacomo Pollini (CRG-TM-Vega) lost positions, even though he managed to keep the head of the KZ2 standings. On the other hand, the Italian Leonardo Lorandi, the frontrunner, dropped back to the last positions at the start and, after recovering as far as second, he got hit by a ten-second penalty for the displacement of his front fairing. Mauro Simoni (DR-TM-Vega) took advantage of the situation and was the runner-up behind the winner, Pollini. Third place for the consistent Italian Luigi Musio (CRG-TM-Vega).

Travisanutto , gets a grip on himself and wins in OK

Tom Joyner (Zanardi-Parilla-Vega) was eager to achieve a great result in the OK Final: on the last laps, the English led the race after overtaking the Danish Nicklas Nielsen (Tony Kart-Vortex-Vega), but during the last phases of the race, Joyner’s engine broke and he was obliged to retire. The Brit’s retirement slowed Nielsen too; the Danish lost ground and the Italian Fabrizio Travisanutto (Tony Kart-Vortex-Vega) took over the leadership of the race. He had already led the pack in the first half of the race, before getting overtaken by Nielsen. Behind him, also the French Clement Novalak (Tony Kart-Vortex) gained ground and finished in second ahead of the Spanish Pedro Hiltbrand (CRG-Parilla).

The battle for the victory in the OK Junior was between the Swedish Isaac Blomqvist and the Dutch Noah Watt (both Tony Kart-Vortex-Vega) came to a sudden end during the last laps, when the two drivers came in contact. The Russian Ivan Shvetsov (Tony Kart-Vortex-Vega) took advantage of the situation and won a WSK race for the first time. Behind him, the Russian Bogdan Fetisov (Tony Kart-TM) and the Belgian Ulysse De Pauw (BirelArt-Parilla) completed the podium respectively on 2nd and 3rd place.

Minì, new winner in the 60 Mini

After a long series of battles in the heats, the Italian Gabriele Minì (Energy-TM-Vega) pulled away in the Final. Behind him, an unstoppable Michael Paparo (IP Karting-TM), who finished second. Good result also for Leonardo Bizzotto (CRG-TM), third.