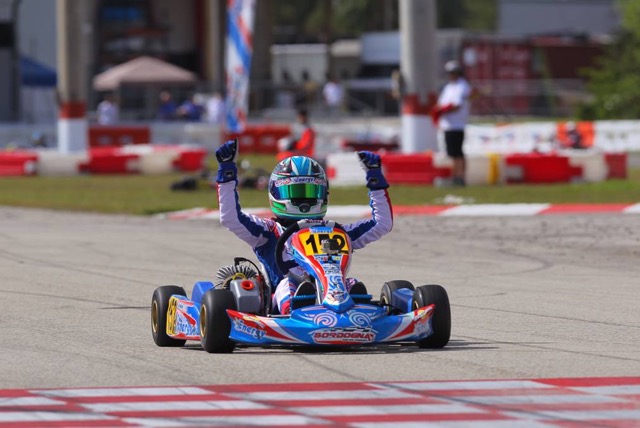 It has been a quiet year so far for Jak Crawford. Close calls, a mistake that cost a win, bad luck, and underperforming equipment summarized the season so far, just a few races into the season. Yet as has been the case in the past, when big stakes are on the line, the 10-year-old driver steps up in a huge way.  His ability to take on the big moments is becoming commonplace.

Jak’s ability to rise to the occasion was on display at the 2015 Rotax National Championship in the Micro MAX class last August as well as the Rotax US Open in Las Vegas in the Rotax Mini MAX class in October 2015 with championships secured in difficult, pressure-packed weekends. Similar podium results occurred in 2015 at both the ROK Cup International in Lonato, Italy and SKUSA SuperNationals in Las Vegas- two other big events with huge stages.

On March 13th at the Florida Winter Tour (FWT) finale, “Jetpak” Jak secured yet another championship, this time in the Vortex Mini ROK category. The speedy youngster drove the most solid weeklong performance of all drivers allowing him to earn the most points for the week. In the championship winning moment, Jak would also secure a free entry ticket to Italy to once again compete and become one of the worldwide favorites to win at the ROK Cup International Finals.

While Jak’s speed was evident this week practicing at the final FWT event at Palm Beach Karting (PBK) in Jupiter, Florida, qualifying luck only afforded a fifth place effort. Starting from fifth for the three heats, Jetpak would finish first, then second and second again, securing a second place start in the prefinal Event. The outside row would prove to be a hard place to be all week, but Jak excelled on each start or restart.

The grip level usually laid down at big karting events never materialized on the Palm Beach surface. In the prefinal event in the Florida afternoon heat, the track actually lacked grip. Other chassis brands with softer tubing materials would prove to be faster, but Jak was up to the challenge with his all-around well-performing Energy Storm chassis.

Dramatic second place finishes in both prefinal and final events would prove to be enough to win a hard fought Mini ROK championship by nearly 100 points.

More news on Jak’s remaining 2016 racing schedule and karting partnerships will be announced in the coming weeks.