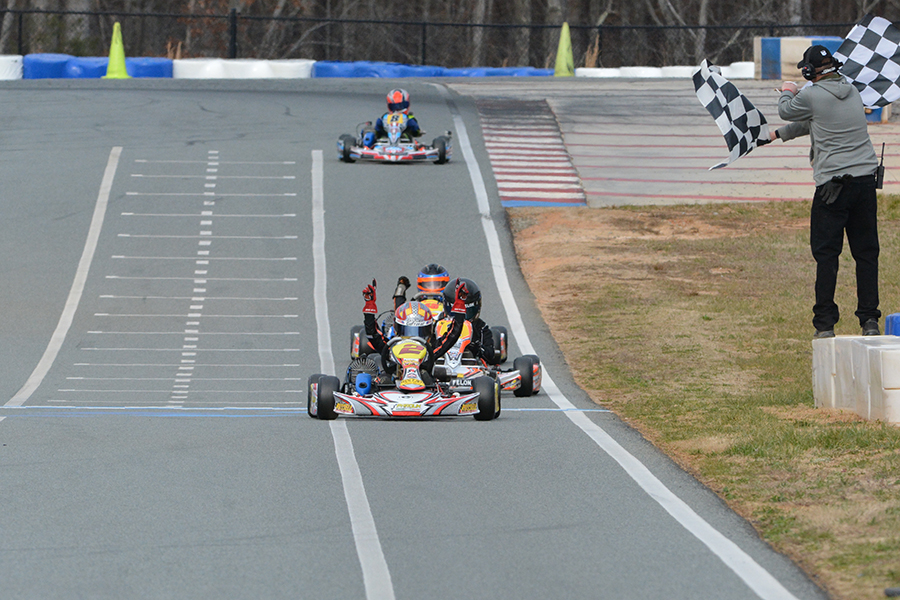 The 2016 racing season is underway, and with that comes the rookie Cadet year for 7-year-old Caleb Gafrarar. A second-generation driver, ‘Caleb G’ is jumping into national-level competition before even reaching his 8th birthday. The first challenge of the season was the new World Karting Association Winter Cup program, which conducted a six-round championship series between December and March. This has given the Kid Kart graduate a chance to get up to speed with the new IAME Mini Swift engine package he will be piloting throughout the season. The hard work and dedication put in by the 2015 IKF Grand National Duffy winner, paid off with a solid series campaign including two victories. 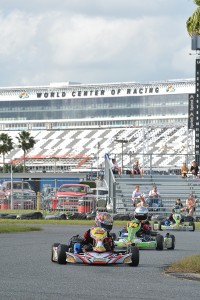 The opening event for the newly established WKA Winter Cup was the annual Daytona KartWeek. Every year, karters from across North America converge on the ‘World Center of Racing’, that is Daytona International Speedway, every year between Christmas and New Year’s Eve. Caleb G was participating in his second Daytona KartWeek, this time as a Mini Swift competitor aboard a new Parolin chassis from Russell Karting Specialties. The opening round began with Gafrarar improving from his sixth place qualifying effort to a fourth and second place finish in the two heat races. Starting third in the main event, Caleb G drove to a fifth-place result to start off the new season with a strong performance.

The following day started off with Gafrarar getting held up in qualifying, finishing the session in the 10th position. Two separate incidents in the heat races kept him from advancing his position, starting the main event in the 12th grid slot. After getting hit at the start once again, Caleb G fought back and drove the wheels off to a sixth-place result.

Jacksonville was the next stop on the WKA Winter Cup schedule, with Caleb G making his second visit to the 103rd Street Sports Complex facility on February 5-7. After qualifying fifth for Saturday’s round of racing, Gafrarar improved to third in the opening heat but suffered a lost chain in Heat #2 after running off track. He started the main event in sixth, and drove his way to the front. Exchanging the lead a number of times, Caleb G led on the final lap heading down the long 1200 foot straight. Two competitors locked up and drafted by him, dropping Gafrarar to third at the checkered flag. 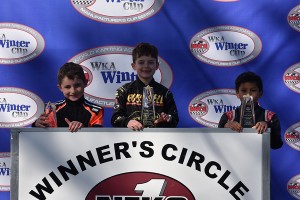 Determined, Caleb G returned the following day with one mission, to win. He improved his qualifying effort by one position, leading to a third place even after getting spun around on the opening lap. Heat #2, Caleb G learned from the events on Saturday, and was sitting second on the final lap, pulling off a last lap pass with the help of a draft for the race win. The Final was a three-driver battle until the power of the Woltjer Racing Engines IAME Swift engine and handling of the Parolin kart under Caleb G led 15 of the 20 laps toward victory.

His first ever WKA Mini Swift victory propelled him into the title chase heading to the series finale on March 4-6 at his home track of GoPro Motorplex in Mooresville, North Carolina. The home track advantage was on the side of Gafrarar in qualifying for Saturday’s round, landing his first fast qualifier award by just 27 thousandths of a second. Caleb G led all eight laps of the opening heat race, but fell back to third after a hard fought second heat race. The 16-lap main event was a battle the whole way through, with Gafrarar able to secure the top spot with two laps remaining, going on to earn his second victory of the series.
The series finale was one about fighting back from adversity. A loose motor limited Gafrarar’s time in qualifying, only able to manage the 10th best lap time of the session. Caleb G fought his way to seventh in Heat #1 and overcame an incident in turn one during Heat #2 to finish seventh once again. Moving forward was the goal for Gafrarar in the Final, working his way into the top-five early and running down the leaders, including his championship rivals. Running third on the final lap, Caleb G went for the second position with an inside move at the inner hairpin. Contact was made and the result left Gafrarar with a lost chain, and out of the race. 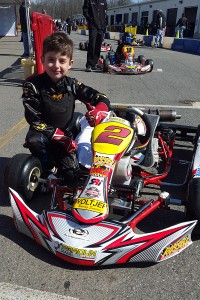 Official championship results have not been published pending review of previous race results. Provisional calculations put Caleb G second in the championship chase, and a well-deserved first points trophy in his Mini Swift career. The remainder of 2016 will be about learning and improving, while also looking to add hardware to the trophy room. Gafrarar is set to compete in the WKA Manufacturers Cup Series, with the next event at the GoPro Motorplex on April 1-3. At the end of the month, Caleb G makes his Superkarts! USA Pro Tour debut in the IAME Micro Swift division at the seventh annual SpringNationals set for April 29-May 1 at the Phoenix Kart Racing Association in Glendale, Arizona.

Caleb would like to thank the following companies for their support toward his racing program; Parolin Racing, Russell Karting Specialties, One Racegear, Chuck G Fabrication, DB Motorsports Graphics, Ribtect, Stock Car Steel/SRI, Grease Monkey Wipes, and WD-40 Specialist. Visit the Caleb G Racer Facebook page to follow his progress throughout 2016 and his newly announced website www.calebgracer.com to learn more and purchase the available apparel to support his racing campaign.