Former Champions Triumph at Round Two for California ProKart Challenge 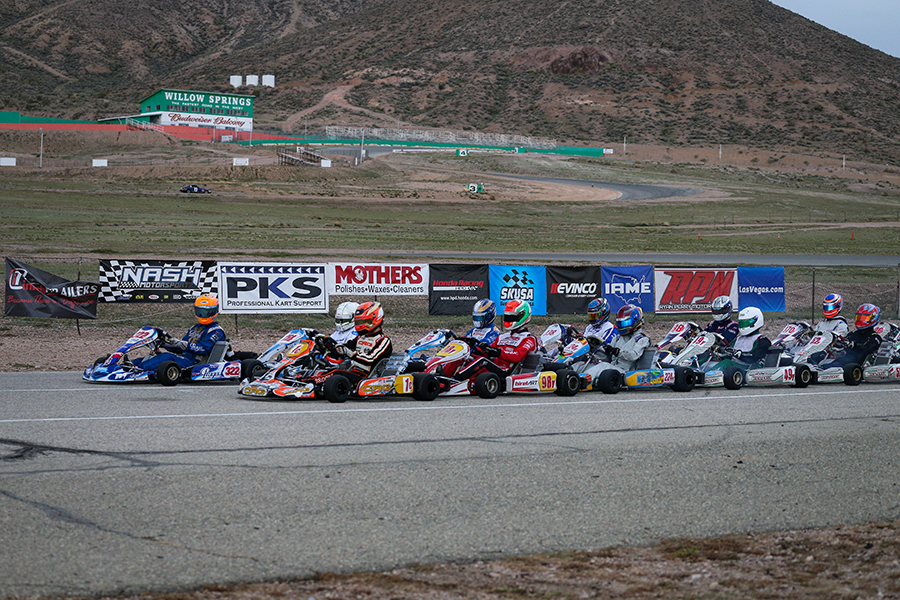 Nearly 200 drivers once again gathered in Southern California for the second stop of the California ProKart Challenge event on March 4-5. The Willow Springs International Raceway was the site of Round Two of the six-race championship series, featuring 11 Honda and IAME categories for all ages. Weather was a fleeting yet big factor, as rain hit the area briefly, forcing officials to declare it a rain race. Although the rain disappeared quickly, every racer that took the track after that declaration received 100 bonus points, per the regulations. The racing continued, and 11 drivers claimed the top step of the podium with the championship picture taking more shape with two full rounds now in the books. 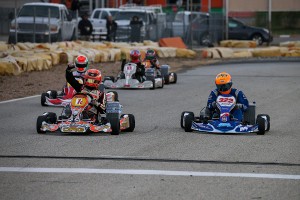 It was a two driver show in the Phil Giebler Racing X30 Senior category with defending series champion Christian Brooks edging out former two-time S1 champion Billy Musgrave. The day began with Musgrave holding the edge in qualifying by nearly two tenths with a 44.166-second lap. Brooks was second in the session, placing him on the outside pole position for Heat #1. On the opening lap, the 2015 series champ took the lead away from Musgrave and led all 10 laps for the win. Heat #2 was a repeat, this time with Brooks winning from the pole position as Musgrave hung on his rear bumper. The racing record on the day stayed perfect through the 16-lap main event, as Brooks led wire-to-wire, beating Musgrave to the checkered flag by 54 thousandths of a second. It was the first podium on the season for the two drivers, joined by third place finisher Phillippe Denes. Round One winner David Vasquez climbed his way up to fourth with veteran Matt Johnson running fifth.

Two former series champions are showing the way thus far in the 2Wild Karting S1 Pro Stock Moto division, each with a victory of their own. Former SKUSA S4 Pro Tour champion Jimmy McNeil has returned back to the S1 class, and bested the field for his first victory of the season. Round One winner and two-time series champion Billy Musgrave – performing double duty in the two headline categories – set the fast lap in qualifying (42.827), just 73 thousandths quicker than McNeil. A late pass in the opening heat race put McNeil at the point and gave him the win. Jimmy led all 10 laps of Heat #2 ahead of Musgrave and proceeded to pace the field all 16 laps in the Final, pulling out to a 1.327-second advantage. Jacob Neal joined them on the podium in third, with Oregon driver Marco Eakins and last year’s champion Jarred Campbell completing the top five. 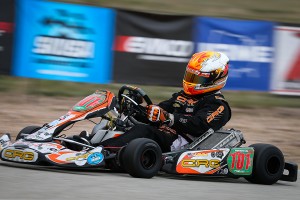 The Leading Edge Motorsport S2 Semi-Pro Stock Moto division welcomed another first time winner in Kyle Wick. S2 rookie Hunter Kelly began the day as the driver to beat, nearly topping the time charts in the combined S1/S2 session, posting a time just 52 thousandths off Musgrave in S1. Kelly went on to cruise to the win in Heat #1, but was joined quickly at the front by Kyle Wick and Kol Bailey in Heat #2. Both Wick and Bailey worked past Kelly early, and finished the 10 lapper 1-2. The torrid pace continued in the main event for Wick, keeping with the top-two in S1 to lead all 16 laps for the S2 victory. Bailey stuck right there, recording the fast lap overall in the race to finish a close second. Hunter Pickett snuck into the third position, dropping Kelly to fourth with returning series driver Race Liberante in fifth.

John Crow broke up the perfect score for Vemme Kart X30 Master championship leader Mike Rolison, taking the victory in Willow Springs. Rolison was the top qualifier to begin the day, with Crow getting the win in Heat #1. The win in Heat #2 went to Crow after Rolison was found to have an incorrect air filter, removing him from the results. Crow came under attack early in the main event, as Tim Meyer once again was quick in the beginning laps of the 16-lap race. Crow retook the lead on lap five, and never relinquished the position for his first victory of the season. Meyer held close for a second straight runner-up result, while 2015 Streets of Lancaster Grand Prix winner Brian Phillipsen placed third. Rolison charged his way from the tail of the field to cross the line fourth, only to be penalized one position for blocking, promoting Derek Burris to the position. 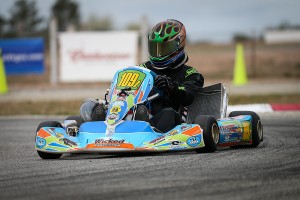 The perfect record came to an end for defending Nash Motorsportz S4 Master Stock Moto champion Darren Elliott; however, the end result was the same. Gianfranco Casadei and Elliott matched their fast laps in the qualifying session, with the tie-breaker going to Casadei for the quickest second fast lap and the 10 championship points. Elliott got the holeshot to begin Heat #1, leading all 10 laps and duplicating the feat in Heat #2. Alan Michel became the lead challenger through the heat races and the Final, unable to take the point from Elliott who scored his second straight main event victory. Michel and Robert Marks stood alongside Elliott on the podium, with Vivek Tandon finishing fourth and Justin Bennett fifth. Ken Schilling almost kept his perfect record intact through two rounds of the Mike Manning Karting S4 Super Master class, just missing out on the fastest lap in the main. The defending champion led all on-track sessions, and was joined on the podium by Darrell Tunnell and PP Mastro.

The day began and ended in the Ryan Perry Motorsport X30 Junior class with Zoey Edenholm as the top driver. She narrowly edged Oliver Calvo for the fast lap in qualifying, with just four thousandths separating their best lap time. Calvo came out of the opening 10-lap heat race crossing the line first, but was dropped to sixth after penalties for a jump start and exceeding speed at the start. This gave the win to Tomas Mejia in what was a very close finish between the top five, all finishing within six tenths of a second. Calvo bounced back in Heat #2, winning the race to earn pole position for the main event. The Final was a battle between Calvo and top qualifier Edenholm. Calvo led at the strip every lap, with a final lap battle seeing the two swap the top spot numerous times. At the checkered, Calvo took it first by 79 thousandths of a second. Officials, however, handed the provisional race winner a one-position penalty for avoidable contact, giving Edenholm her first series win and becoming the second female driver to win at the California ProKart Challenge this season. Mejia was a close third, with Ryan Schartau and Jagger Jones completing the top five. 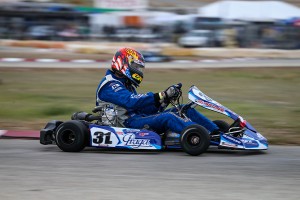 Results from the PKS Professional Kart Support Mini Swift division are provisional pending a current investigation. On the day, defending champion Anthony Willis advanced one step up from his Round One finish to earn his first victory of the season. Willis led all sessions, minus the opening heat race. A 49.464-lap just narrowly edged out Jalen Mack and Colin Queen by 98 thousandths of a second. He was shuffled back to fifth in Heat #1, with Carson Morgan leading the group of drivers to the checkered flag. Willis fought back in Heat #2 to score the win and pole position for the main event. From there, he led all 12 laps for the victory, pulling away to a 3.6-second advantage over Morgan. Jace Jones won the battle for third ahead of Cole Cotham and Ethan Ho.

Kai Sorensen became the second different winner this season in the Top Kart USA Micro Swift category. Sorensen led qualifying but relinquished the top spot to Carson Kragh in Heat #1 before coming back to win Heat #2. At the start of the main event, Sorensen was shuffled back outside the top five, but recovered to reach the lead position by lap four. Sorensen led the remaining laps for victory #1 on the season. Kragh finished the race second but was penalized 15 positions for advancing after the commitment cone. That promoted Cooper Hunt to second with Frankie Mossman third. Ethan Nascimento and Piers Aspiras made up the top five. 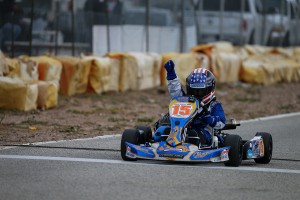 The Outsource Utility Contractor S3 Novice Stock Moto class grew to 17 competitors for the Willow Springs weekend. This category also welcomed a new winner in Royal McKee. Round One winner Garrett McKelvie secured fast time in qualifying, while McKee turned up the wick in the heat races. After winning both, McKee led all laps for the victory with McKelvie close behind. Adrian Yong finished on the podium, with Evan Jonker and Jim Bai completing the top five. Dean Heldt landed his second win of the season in the Rolison Performance Group S5 Junior Stock Moto division over Ricco Shlaimoun.

The California ProKart Challenge is set to host Round Three, traveling north to the Monterey Bay Karters facility at the Marina Municipal Airport Complex in Marina, California on April 1-2. More details on the event will be posted shortly. For more info on anything related to Superkarts! USA, please visit the website – www.superkartsusa.com and be sure to follow the Superkarts! USA Facebook page and Twitter account – or call the SKUSA head office at 951-491-0808.