The DR Racing Kart has continued to grow throughout the North America market, thanks to the work and promotion from DRT Racing in New Hampshire. Now, the Italian manufacturer has named the operation as its sole importer for 2016 and beyond. Don Guilbeault and his staff represent the brand for the United States and Canada, working directly with the factory and five-time world karting champion Danilo Rossi. 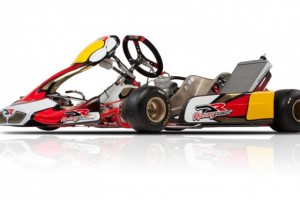 “We are 100% committed to Mr. Rossi and the entire factory at DR Racing Kart. It has been a solid working relationship with them for the past several years, and the quality of product they produce is second to none,” stated DRT Racing owner Don Guilbeault. “Throughout the world, DR Racing Kart is earning solid victories and championships, including here in the United States and Canada with the many racers and dealers we support. We are looking forward to another great season in 2016, and a continued future with DR Racing Kart.”

DRT Racing is coming off one of its most prestigious victories here in the United States with team driver Danny Formal winning the S1 Pro Stock Moto division at the Superkarts! USA SuperNationals this past November in Las Vegas. The performance was one of dominance, and many other drivers in the paddock showed the potential of the DR Racing Kart. Formal also secured victory at the Florida Winter Tour Rok Cup USA event at Ocala Gran Prix in the competitive Rok Shifter Senior division. The DR Racing Kart driver will be gunning for the series championship this month at Palm Beach Karting facility on March 11-13. DRT Racing is starting off 2016 the way they ended 2015, on top of the podium.

The operation is expanding its Arrive-and-Drive program for 2016, including all Gearup Challenge promoted by the F-Series and the Superkarts! USA Pro Tour. DRT Racing offers full race packages for Juniors and Seniors in TaG, Stock Moto and KZ. All drivers will be equipped with DR Racing Karts and the engine of their choice, race-prepped and delivered to you with the same demanding standards of the national team drivers. DRT can provide the guidance and expertise needed to win at the club, regional and national levels.

At the track, you’ll have access to all the parts you need, hands-on technical support and data analysis from national level champions and tuners. The advantage to you is the advantage you will have over your competitors. DRT Racing eliminates the guesswork of chassis and engine setup to get you up to speed in the shortest amount of time possible. DRT Racing also offers race prep, equipment transportation and trackside support.

New this year, DRT Racing is offering purchase and rental plans in the rapidly growing Briggs & Stratton 206 classes. The DR Kart IVS four-stroke chassis is winning races in the United States and Canada, quickly earning recognition as a leader in this highly competitive class.

Based in Hudson, NH, DRT Racing imports, sells and races DR Racing Karts and NEK Racing Seats and Components. DRT Racing is currently seeking additional dealers to its network in the United States and Canada market to help share in the continued growth and success of the DR Racing Kart. A complete line of chassis including Kid Kart, Cadet, Four-Cycle, TaG and shifter is available, including the proven M99 specially designed for the North American market.