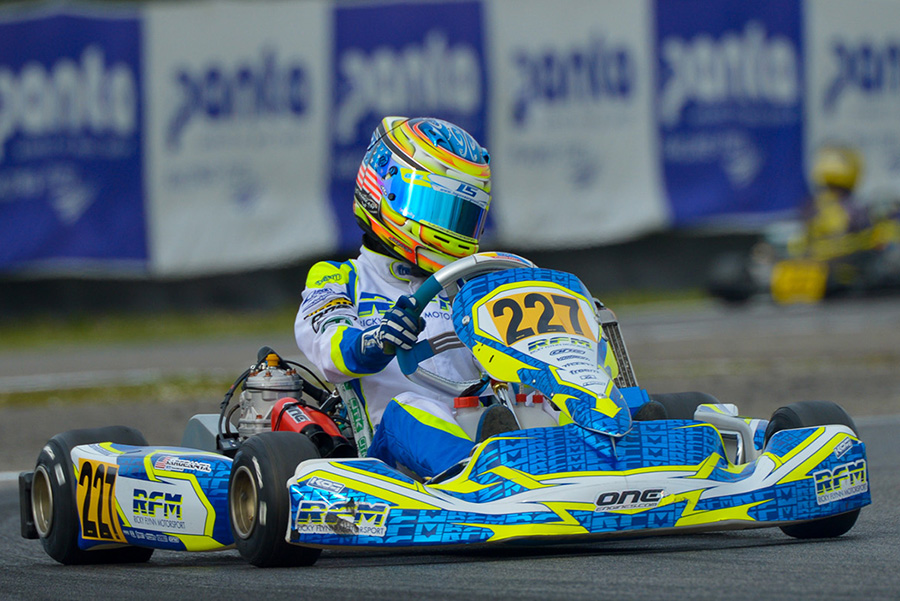 It is only the first day of the WSK racing weekend in Castelletto di Branduzzo (Italy), but the Super Master Series has already proved that the top drivers will need to do their best if they want to achieve success. Those who have succeeded in this first part of the season – for example the winners of the recent WSK Champions Cup in Adria – are already at the top of the list of the fastest drivers in today’s Qualifying. However, there are going to be rough battles on track, as it is clear from the results in each of the categories admitted to the race. Tomorrow’s heats on the 7 Laghi International Circuit are going to be uncertain until the end.

The 1,256 metre long Italian track offers lots of spots were overtaking is possible: that’s a further reason to follow the race also on the web thanks to the live streaming of the Prefinals and of the four Finals on schedule on Sunday 6 March.

De Conto is the pole sitter in KZ, Corberi is the fastest in KZ2

Among the KZ champions, the Italian Paolo De Conto (CRG-Maxter-Vega) was the fastest. He won the recent event of Adria and, also here in northern Italy, he is still the driver to beat. He stopped the clock at 46”491, beating into second his fellow countryman Marco Ardigò (Tony Kart-Vortex-Vega), who completed his fastest lap in 46”690. Behind them the French Anthony Abbasse (Sodikart-TM-Vega) and the Italian Flavio Camponeschi (CRG-Parilla), fourth. In KZ2, best time for the Italian Luca Corberi (Tony Kart-Vortex) in 46”.750, ahead of another Italian, Giacomo Pollini (CRG-TM).

He wants to dominate in OK Junior, that’s what the Belgian Ulysse De Paw (BirelArt-Parila-Vega) aims at. He set the fastest time thanks to his 48”632. The English Fin Kenneally (FA Kart-Vortex-Vega) is warned: he arrived at Castelletto as the favourite after his victory in Adria, but today he was 53 milliseconds slower than his rival. Good performance also for the Spanish David Vidales (Energy-TM-Vega), third ahead of the Moroccan Sami Taoufik (FA Kart-Vortex-Vega). In the first two heats, which took place in the evening, the first winner was the Swedish Isac Blomqvist (Tony Kart-Vortex-Vega) right ahead of Vidales. The second heat was won by Taoufik, second the Norwegian Dennis Hauger (CRG-Parilla-Vega).

Sargeant grabs the pole in the OK

The star spangled banner still flies high in the OK thanks to the American Logan Sargeant  (FA Kart-Vortex- Vega), reigning KFJ World Champion. He was the winner of the WSK Champions Cup and he grabbed the pole thanks to his 46”931, the only driver to go under the 47 seconds. The following three drivers are all within 8 undreths of a second: the Spanish Pedro Hiltbrand (CRG-Parilla-Vega), second, the Danish Nicklas Nielsen (Tony Kart-Vortex) and the British Tom Joyner (Zanardi-Parilla).

Tough game also in the 60 Mini

With 73 drivers at the start, also the 60 Mini is ready to get on track to conquer the top of the WSK Master Series standings. A large part of today’s programme was dedicated to Free Practice, while Qualifying is scheduled for tomorrow morning. All the young drivers aim to follow the path of the Norwegian Dennis Hauger, winner in 2015 and, today, brilliant protagonist in OK Junior.