From the Tower: Challenge of the Americas 2016 – PKRA 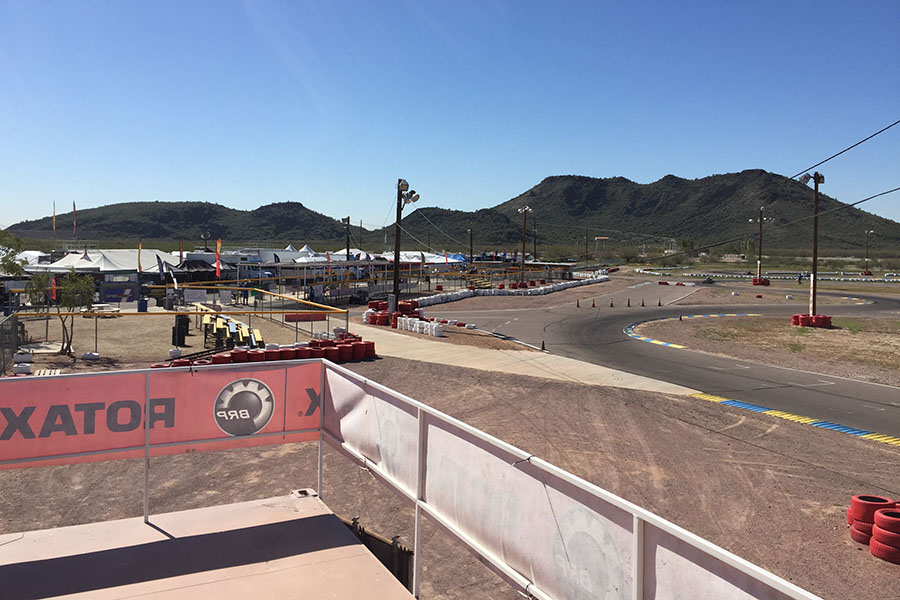 We spend our entire raceday up in the tower, watching every on-track session while producing our EKN Trackside Live program, so not much time is spent roaming the paddock for the stories. The ‘From the Tower’ column is our chance to delve deeper into some of the accounts that develop over a race weekend, those that may or may not have been included in the daily race reports. For complete coverage of the Challenge of the Americas PKRA round, visit the EKN Event Page – DC

For the first time in series history, the Challenge of the Americas welcomed an increase in numbers from stop one to stop two. The total was just a little bit above 100 drivers at the Phoenix Kart Racing Association, which is where the Tucson weekend finished. Overall, some classes lost entries while others increased. The shifterkart group was the highest total at 24, including six Masters and 18 Senior pilots, while Senior Max was the largest class at 22. Numbers are expected to be the same, if not increase more as the program heads to ‘wine country’ and the Simraceway Performance Karting Center in Sonoma, California. There, the Sanzaru Games Karting Championship includes both Rotax Max Challenge and shifterkart competition. A number of locals are expected to take part, along with others from around the country as the facility will host the United States Rotax Grand Nationals in August for the first time. 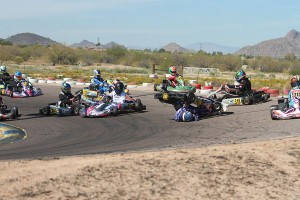 During the Sunday main event in Senior Max, an opening lap incident involving nearly half the field collected podium and championship contender Michael Michoff. The Rolison Performance Group driver was making his second weekend start in the Senior division after performing well in the Junior ranks in 2015. Last season included a vice-champion spot at the Can-Am Karting Challenge and with that came a ticket to the 2015 Rotax Grand Finals in Portugal. Michoff drove to a 12th place performance, second best among Team USA.

The Sacramento area resident stood on the podium in his Senior debut at Tucson and added two top-five performances to place himself in the championship hunt at the halfway point. Sunday Michoff started inside the top-10 and was looking to move forward when he was unable to avoid the already spun Jordan Sherratt. The Sodi Kart driver attempted a pass for the lead in the turn 10 ‘Daytona’ and spun his machine around. Sitting dead at the apex, the field began diving into the corner and attempting to move around the stalled Sherratt. Michoff was the first to try going low and under, making direct contact with the front of Sherratt’s kart. This sent Michoff’s kart up and over onto its side, sending Michael for a hard crash to the ground with the kart slamming on top of him.

After the medics evaluated him, they put him on a backboard for precaution and transported him to a nearby hospital. Doctors there discovered he had three broken ribs and a ruptured spleen, thus requiring surgery. The procedure went well, and once Michael begins walking again he should be released from the hospital very soon. Our best wishes go out to Michael during his road to recovery.

Following the accident, the Senior Max field was put into the rear of the grid area to allow the Mini Max field onto the track for their race and give competitors repair time for a complete restart. It was a zoo on the grid with a number of karts getting complete make-overs, including front row starter Jordan Sherratt, RPG’s Kellen Ritter and Saturday’s winner Christian Brooks. It was a true act of teamwork throughout the grid with members of numerous teams helping out, even dragging in frame tables to straighten out chassis. All but Michael were able to make the re-start, providing another exciting 25-lap race. 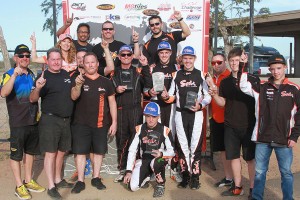 Not since the Giebler family with the Zeen brothers have we had the Sodi Kart brand performing at the top level here in the United States until now. The Dallas Karting Complex, which took over the Sodi name for the US market in 2011, has kept the brand afloat, never really standing out among the sea of chassis names and manufacturers. A US Rotax Grand Nationals title for Mike Jones in 2014 and Nathan Adds in DD2 last year helped solidify the brand in the Rotax market. Adding Jake French to its program gave the shifterkart section new life with his results and the work done by the entire operation to help grow the race team.

This weekend was a stand-out performance by Sodi Nation, earning four victories in three categories. Co-owners Kevin Adds and Mike Jones have worked diligently on creating a professional race team around the Sodi Kart brand, and now with a few seasons under their belt, the hard work is paying off. Jones himself gave the brand two victories as he swept the Masters Max division to solidify himself as the championship leader heading into the series finale. Jones beat out former series champions, SKUSA SuperNationals winners, and SKUSA Pro Tour champions over the two days.

Jake French swept the Tucson weekend in Shifter Senior and came out of Phoenix with another victory, fending off hometown driver and Round Three winner Kolton Griffin. French is now in the driver’s seat for the championship as well heading to Sonoma. The work he and his father Mark have done is giving the rest of the operation a great since of confidence with their shifterkart package.

The confidence continues to grow in the young mind of Nathan Adds. The 2015 US Rotax Grand Nationals DD2 champion was never one to show well in the single-speed categories. Now in 2016, Adds is showing new life in Senior Max. Top-five performances in two of the first three rounds helped him climb to the third step of the podium for Round Four in Phoenix, and put him with an outside shot at challenging for the championship. South African driver Jordan Sherratt gave Sodi Kart a fourth victory on the weekend, as the third place finisher at the Rotax Grand Finals 2015 drove to the checkered flag on Sunday after the entire Sodi Nation group worked together to repair his broken kart in the red flag incident. Sherratt drove with confidence and led all 25 laps for victory in his series debut.

Senior Title Still Up for Grabs 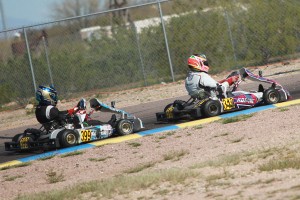 The championship appears to be going down to the wire once again in the Senior Max division. In the last two seasons, the title was decided by a total of six points, with Phillip Arscott and Luke Selliken clinching the crown in 2014 and 2015 in the final moments of the series. Arscott rallied back from a technical disqualification in Round Five, coming back to win the following day to lock the championship by two points over Louie Pagano and five ahead of Jake Craig. Christian Brooks is attempting to do the same after his Round One DQ that left him a ‘man on a mission’. Brooks won Round Two and now Round Three, finishing second to Sherratt Sunday in Phoenix. Unable to drop the DQ, Brooks will need to continue the streak of podium finishes to have a chance Sunday in Sonoma to earn the crown that eluded him last year by just four points.

He along with the rest of the contenders are chasing the consistent performances of Kellen Ritter. The Rolison Performance Group driver landed on the podium three straight races in his Senior Max debut, placing fifth Sunday in Phoenix to assume the championship lead. His RPG teammate and PKRA regular Jim McKinney is right there, as the Round One winner was shut out of the podium at his home event. With the series counting the best five of six rounds toward the final standings, seven drivers will enter the finale within 100 points. 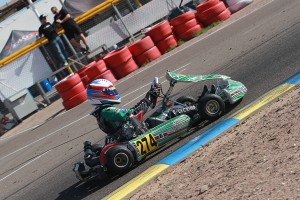 Nick Brueckner could make history in Sonoma should he swept both rounds in Junior Max (Photo: EKN)

For the second straight event, Nick Brueckner swept the action in the Junior Max category. The 2015 vice-champion has his sights on his first ever Rotax Grand Finals ticket, missing out on the title last year after challenging eventual champion Sting Ray Robb to the end. Four rounds are in the books with Brueckner piloting his Orsolon Racing / Tony Kart to the P1 position in all on-track sessions. Ironically, Brueckner has not been able to record a single fast lap in the four main events. The top challengers, including Matthew Taskinen and Hannah Greenemeier, challenged Brueckner early on in the Prefinal and Final races in Phoenix. After a few laps, Nick would flip a switch, and put himself back into the lead before slowly stretching away with consistent lap times. Brueckner will attempt to complete the series sweep in Sonoma, something that has not been done in the nine-year history of the Challenge.

The rest of the field is beginning to catch up and Sonoma may be their opportunity to break up the perfect score with the title nearly out of reach. Greenemeier is a Junior rookie that is excelling under the guidance of the RPG crew. Saturday was her first podium, backing it up with a runner-up on Sunday, all while recording the fast lap of the race. Taskinen, in his first full season at the Challenge, has four straight podium finishes. A runner-up and third place performance in Tucson was duplicated in Phoenix. All of the Junior drivers in the field at PKRA are truly advancing, with many of them recording their fastest laps at the end of the grueling 25-lap main events.

Shifter Divisions Down to a Couple of Duels 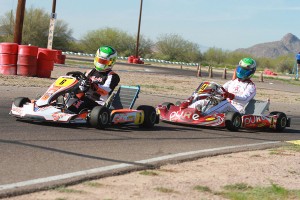 Jake French got the better of hometown driver Kolton Griffin in Round Four (Photo: EKN)

Jake French established himself as the driver to beat following a Tucson sweep of the weekend in Shifter Senior, earning maximum points. Pure Karting’s Kolton Griffin positioned himself as the lead challenger following the Round Three win at his home track, missing out on the Round Four victory to the Dallas Karting Complex / Sodi Kart driver. There was plenty of opportunity for Griffin to move French out of the way, but the Arizona driver showed great poise and respect, knowing the officials were watching every move the two made. With two rounds remaining and a drop race to be factored in, Griffin will need to perform his best both days in Sonoma if he wants to challenge French for the title.

On the Masters side, things are locked up at the top between two veterans. Darren Elliott ripped off two victories in Phoenix to even himself with Ryan Kinnear in the win column and the championship chase. The two are tied after four rounds, with the two days in Sonoma set to determine who comes away as the inaugural series champion. 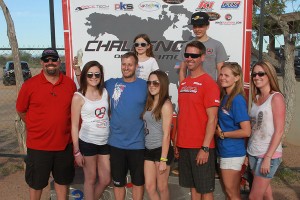 The Karting Community United organization helped to score another win for the sport. A 50/50 raffle took place over the weekend and raised $1,658, surpassing the amount garnered in Tucson. Half of that total went to the winning ticket, Caleb Loniewski who was working with Masters Max driver Billy Cleavelin under the Rolison Performance Group on the weekend. The remaining half goes into the KCU fund which continues to help support karting community members in need of support. All five board members (Alan Rudolph, Maddie Egger, Mike Maurini, Jen Durrant and Andy Seesemann) were in attendance.