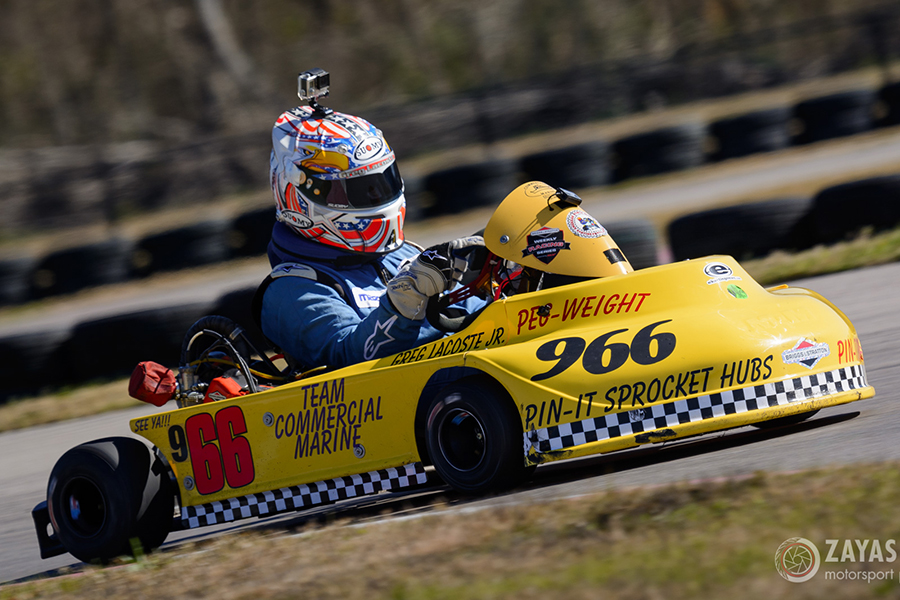 The first weekend for the NOLA Sprint Kart Championship is in the books, the Season opening doubleheader races brought in 67 racers among 11 classes to kick off the 2016 season at NOLA Motorsports Park, even with the mixed weather throughout the weekend with changing track conditions on both days. Saturday’s race 1 was contested on the .71 mile “Southeast” layout with Sunday’s race 2 being held on the 1.01 mile “US Open” layout. Sunday would be a histroic day marking the first time in 5 season of kart racing at NOLA that a club race was held on an extended layout using the Arrive & Drive section of the Kart Track as well as giving locals a chance to get practice and set some base lap times for the proposed layout to be used for this April’s US Open National Kart race. 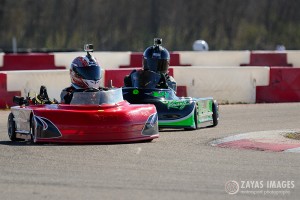 Kicking off both days of competition would be the Briggs & Stratton LO206 powered adult class of Senior 4-Cycle. Defending class champion Greg Lacoste Jr. (Margay) looked to be on the back foot after qualifying 9th in the field of 14. Jace Lacoste (Margay) set the pole time with a 53.173 over Johnny Stephens (K&K) and Scott Griffin (Razor). The Pre-Final seen Stephens make the best of his front row starting position and claim the win over Jace and Greg Jr. making his way up from mid pack, setting fastest lap of the session in the process. Greg Jr. continued that pace in the final, making his way to the front 8 laps into the 20 lap final. Jason Lee (Margay) made the biggest jump from 7th in the Pre-Final to battling Greg Jr. for the lead in the late stages of the race. Greg Jr. would hold off Lee to claim the win for the day with Stephens rounding out the podium spots. Sunday’s race on the 1 mile US Open layout seen Greg Jr. return to form sweeping all sessions and claiming maximum bonus points, Lee would place 2nd in the final capping off a strong weekend for him with Griffin placing 3rd. Junior champions Micheal Causey (Coyote) and Macon Moore (Ionic Edge) both had good first weekend’s in the senior ranks with Causey placing 6th in Saturday’s final and Moore placing 4th on Sunday. The Junior 1 class, also using the Briggs & Stratton LO206 engine package, seen Ayden Guilbeau (Coyote) and Camryn Reed (Ionic Edge) in the top spots for both days in the class of eight. Both battled intensely for both days with Guilbeau taking the weekend sweep in the Final. Ryan Gonsouline Jr. (Exprit) and Justin Hartenstein Jr. (CRG) would round out the poduims for both days. Seth Corbin (Margay) claimed an uncontested win in Junior 2 in Sunday’s final. 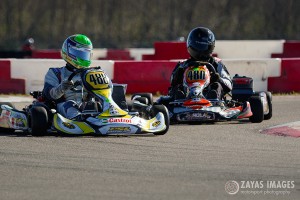 Rotax Junior Max seen two of last years championship contenders pick up where they left off. Tyler Bruno (Tony Kart) and Bryce Boada (Kosmic) lead the field after qualifying Saturday with the advantage to Bruno. Texas racer Brandin Warwas (Tony Kart) was not far of the pace either and showed it by taking the Pre-Final win and setting fast lap for that session over Boada and Cade McKee (Tony Kart) as Bruno suffered a mechanical putting him at the back of the Junior field for the Final. Bruno would bounce back though working his way up to the top spot by the third lap of the 22 lap final. Bruno would go on to win followed by Warwas and Boada. Sunday’s racing would be no different Bruno taking top honors in qualifying but this time Boada would be the main antagonist for the day. All of this came to a moment on the last lap of the final with Boada making a daring move to over take Bruno for the lead in the tight rental section of the track, that ended up with both spinning of into the grass, both would recover to take the checkered flag with Bruno having enough of a gap to take the win. Devin Melancon (CompKart) would capitalize on the last turn incident to claim 2nd but would later be disqualified due to a technical violation promoting Boada to 2nd and Maxwell Waithman (Tony Kart) to 3rd. Boada also would be the fastest Junior driver from Sunday’s track clocking a time of 1:06.108. 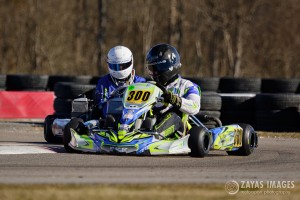 Everett Thomas (#300) picked up where he left off last year in Rotax Senior Max sweeping the weekend (Photo: Zayas Images)

Rotax Mini Max based on this weekend is shaping up to be the most exciting class to watch this year. The main characters from last year’s Micro Max season, Cole Killian (Tony Kart) and Jesse Mitchell (BirelART), started Saturday off by picking up where they left off with an exciting finish to the checkered flag with Killian besting Mitchell at the line by .039 of a second. The two would continue the battle and being the class of the field going into Sunday, with Killian making the last lap pass in the meat grinder section of the track to take the win and sweep the weekend followed by Mitchell who turned the fastest lap of the day with a 1:09.007. Peyton McDonough (Tony Kart) and Tyler “Schummi” Clement (Tony Kart) would round out the poduim for both days.

Everett Thomas (CompKart) picked up from exactly where he left off in Rotax Senior Max dominating both days by a margin of 9 seconds or more claiming maximum bonus points with a lap of 1:04.846 on Sunday’s layout. Zach Rouse (Energy Kart) and Sebastian Guerra-Mondragon (Tony Kart) would claim 2nd for both days while Travis Bennett (Kosmic) starts the year off strong with a pair of 3rd place finishes. Rotax Masters Max seen two different winners from the weekend. James Dix (BirelART) opened the year with a win over James Kreihs (FA Kart) on Saturday, with John Robicheaux (CRG) taking a break from the senior class swept the day in class over Kreihs with Dix finishing 3rd. 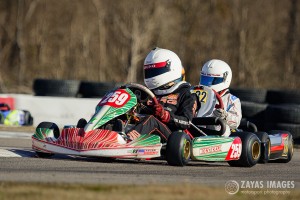 Tyler Bruno (#259) starts off the 2016 season by claiming both days in Rotax Junior Max aboard his new Tony Kart (Photo: Zayas Images)

The Rotax DD2 category seen the tremendous growth from last year with field increasing to 13 karts between the Max and Masters classes compared to 5 from the first race a year ago. Senior Max champion Everett Thomas (CRG) started his first weekend in DD2 Max off in the right direction by sweeping all sessions on Saturday over reigning champion Luis Zervigon (CRG). On Sunday however Zervigon would bounce back and best Thomas on track for all sessions taking maximum points and setting fastest lap on Sunday at a 1:02.868, leaving the two tied for the lead after the first weekend. Returning after a year off from kart racing, Brian Whitmire (CRG) and J. Peter Licciardi (CRG) rounded out the podium for both days. DD2 Masters seen Chris Clement (CRG) open the year with a pair of wins in class over Todd Meyer (CRG) and Al Hassenboehler (CRG) on Saturday and Doug Thornton (BirelART) and Scottie Spell (BirelART) on Sunday. Chris would post the fastest lap on the “US Open” layout of a 1:04.299 for the class. The Shifter category seen 4 entries for the opening round of the championship with 2 entries each in Shifter Masters-S4 and Shifter Senior-S2. Anthony Harwin (CRG) swept the weekend in Masters with Stephen Lamana (CRG) making a return to sweep the Senior class. Lamana turned the fastest time overall on Sunday with a 1:02.046 averaging 56 mph. 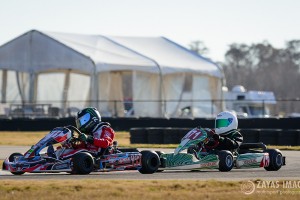 Race 3 of the 2016 season for the NOLA Sprint Kart Championship will take place on Saturday, February 27th, little more than two weeks after Mardi Gras, on the .65 mile “Mardi Gras Mambo” layout. This layout is the reversed version of the “Paul’s Parking” layout ran in May of last season. Turns 1 thru 5 will be very familiar for the seasoned NOLA kart racer with the tight turn 7 hairpin being the only unknown, being the first time ever this corner was raced in this direction, making it the turn to watch for Saturday’s races. “Mardi Gras Mambo” is one of 6 new layouts to be run for this season, which means that there is no reference times to go off of. Official Test Day for this layout are scheduled for Saturday, February 6th and Saturday, February 20th from 8am to 2pm as well as Friday, February 26th before the race from 8am to 5pm. Registration is now open for this weekend at Motorsportreg.com or via the NOLA Sprint Kart Championship webpage on NOLAmotor.com.

The NOLA Sprint Kart Championship is a track run racing series for sprint style racing karts at NOLA Motorsports Park, located less than 20 minutes west of New Orleans. The Championship will hold 12 races over 10 months with the majority being single day events with two doubleheader weekends and two Saturday night races held during the summer months. Each race in the series runs on one of over 80+ configurations that can be set for the NOLA Motorsports Park Kart Track, the largest and most versatile karting facility in North America that has hosted two international karting events, the 2013 Rotax Pan American and Rotax Grand Finals. NOLA will also host the first round of the Maxspeed Entertainment’s US Open on April 21st thru the 24th. Race track length can run from as short as a quarter of a mile to a little over a mile in length. 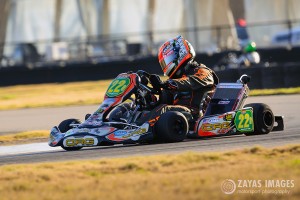 Stephen Lamana (#22G) set the pace in Shifter Senior, taking fastest time in route to a win for both days (Photo: Zayas Images)

Focusing on affordability and competitiveness, the NSKC’s kart classes are based on the national rule sets for the Briggs & Stratton’s Local Option 206, the United States Rotax Max Challenge, the US Open and Superkarts USA’s Spec Honda Shifter Categories, helping to ensure that experienced and novice kart racers from 7 years old to 30 years plus can all have a level playing field to compete in. There is even an Arrive & Drive class that racers who do not own karts can come and compete in called the NOLA GT MAX Cup that uses concession style Sodi brand karts powered by 21 horsepower Rotax FR125 engines. All classes race for trophies and awards each race with end of the year awards handed out to points champions. The NSKC is also part of national points programs such as the United States Rotax Max Challenge, Briggs & Stratton Weekly Racing Series and the Sodi World Series.

Albeit a local or sometimes referred to as a “club” series, the NSKC often draws over 60+ racers, rivaling that of some larger regional events, attracting racers not only from the state of Louisiana, but all across the Southeaster United States. For more info on the NSKC and NOLA Motorsports Park, visit our website at www.nolamotor.com or send an email to karting@nolamotor.com