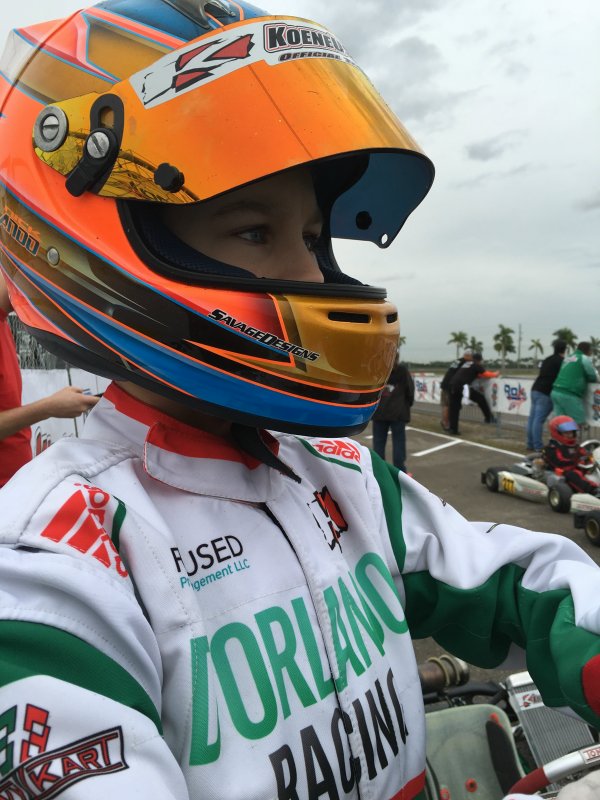 What a weekend for Nicholas d’Orlando as he wasted little time earning his first podium finish in just his fourth Junior career weekend, and only his second Rotax Junior MAX race.  There would be no denying the rookie this time as he put on an impressive performance bringing home a second place finish in round two of the Florida Winter Tour Rotax MAX Challenge in Ocala, FL.

Friday morning practice sessions put the young rookie in the top group of drivers, but Nicholas d’Orlando wouldn’t settle for anything less than a fantastic Pole position result for the event qualifying round.  With older brother, Michael, closing out the second qualifying spot, Heat race action would see a monumentus front row of brothers.  But racing action is very different from head-to-head competition.  A hard fought Heat race 1 would result in a 5th place finish for Nicholas, with seasoned veterans of brother Michael and home track favorite Mathias Ramirez taking the top two spots respectively.

It was back to head-to-head heat race action on Saturday, but this time Nicholas was on top of his game, bringing home a third place finish and his first victory in Junior competition.

These top notch performances from the young rookie was enough to earn him the third starting position, on the inside of row two, for the afternoon’s PreFinal event.  Starting directly behind older brother Michael they would work together to attempt to lock Ramirez on the outside of his front row starting position.  But as Ramirez successfully took the inside lines to move to the front quickly in the opening laps, and as Michael ran into trouble in the early laps, it became a race for Nicholas alone to track down Ramirez out front.  With one to go Nicholas put the pressure on Ramirez but it would not be enough to catch the veteran. Nicholas’ solid performance would set him up with an outside front row starting position for Sunday’s main event.

Sunday would see the beautiful weather continue once again as the stage was set for what seemed would be an exciting final match up in the Rotax MAX Challenge Junior event.  Surrounded by an experienced class of veterans, Nicholas would have to deal with the challenges of other Junior drivers early in the opening sequences.  Falling back as far as 4th spot, Nicholas quickly regained himself to a comfortable second place position, but it wouldn’t turn out to be as exciting as it really could’ve been as home town driver Mathias Ramirez jumped out to a great start and checked out early.  And any expectations that older brother Michael may provide help to make up early ground from the 12th spot, disappeared with contact in the first lap.  Throughout the remaining 15 laps, the No. 215 KoeneUSA prepared TonyKart would run equal lap times to the leader way out front and the young rookie took the checkered flag in comfortable second spot, earning Nicholas his first podium finish in just his fourth final race in his Junior career.

“What a weekend! I felt so much more confident going into this weekend and was looking forward to redeeming myself from Homestead.” said Nicholas. “Everything just seemed to click and we were fast from the start. It was great to run up front with my brother but we both knew Ramirez would be hard to beat here at home.   I am happy with the results and even happier to get my first podium so early in my Junior career.  I’m hoping this is the start of some great momentum for us  when we head into Palm Beach next month.”

They would like to extend thanks to their team at KoeneUSA (www.teamkoeneusa.com), including Mike Maurini and Martijn Koene for their continued support & power, and also welcome back tuner Adam Johnson, after an extensive absence from the paddock for completing US Air Force duty.  Furthermore, a special Thanks to the support of their sponsors at adidas Motorsport/Fyshe USA (www.adidasmotorsport.com), Kool Nerd Clothing (www.koolnerdclothing.com), Focused Project Management (www.focusedpm.net) and Iona Preparatory School (www.ionaprep.org).