Cook to Compete in Challenge of the Americas Event This Weekend

First event since November for talented female from Colorado 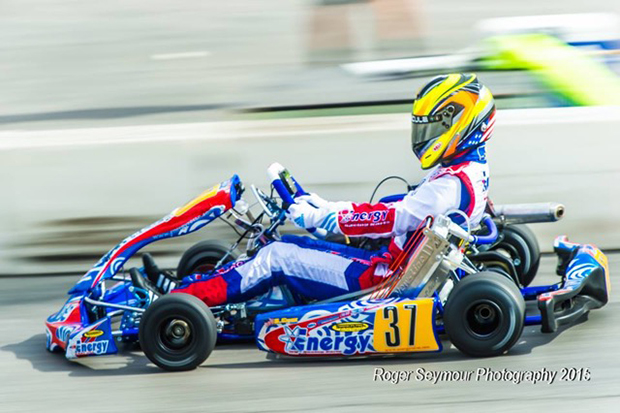 The talented female from Colorado will look to stand atop the Shifter Senior podium in Phoenix
(Photo: Roger Seymour Photography)

Hitting the track for wheel-to-wheel competition for the first time in 2016, Sabré Cook will travel to Phoenix, Arizona for the second round of the 2016 Challenge of the Americas. Piloting a new blue Energy Kart, Cook will enter the Shifter Senior category as she aims for the top step of the podium to kick her season off right.

“It has been a few months since I have competed but as always, I am up for the challenge,” explained Cook. “I am happy that the Challenge of the Americas program has added some shifter kart classes as I really enjoy it. I am hoping that I am able to kick the season off with a win as well as put on a good show and garner the results needed for my new supporters.”

Showing speed and race-winning talent in a variety of different classes, Cook has been a threat in both Rotax and gearbox competition throughout the United States. A threat for the US Open Elite Shifter title in 2015 and a member of Team USA at the Rotax MAX Challenge Grand Finals in Portugal late last year, Cook has proven that she is one of the top up-and-coming female drivers that motorsports has to offer. Couple her on track results with her off track dedication in both the paddock and in her schooling, Cook is a shoe-in for success in whatever she gets behind the wheel of.

Cook continued, “There is a lot in the works for 2016 but right now, my focus is on this coming weekend. I want to get back in the seat and compete at a high level. Once the weekend is over, I will focus towards the next task and race.”