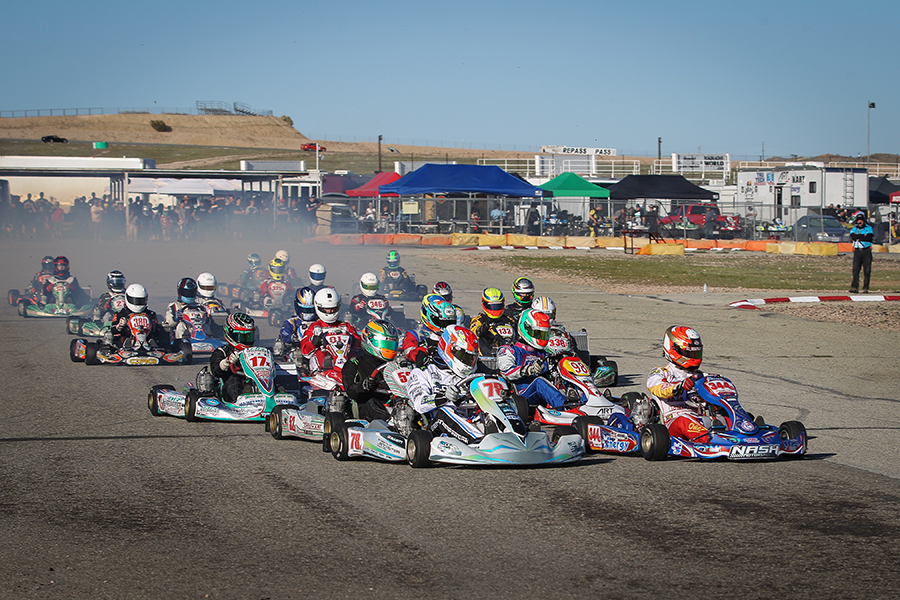 Full fields are expected once again for the second stop of the California ProKart Challenge, set for March 4-5 at Willow Springs (Photo: DromoPhotos.com)

It was a record breaking kick-off to the 2016 season for the California ProKart Challenge at the beginning of February. Nearly 200 drivers took part in the two-day event at the Buttonwillow Raceway Park in Buttonwillow, California, opening up an exciting championship battle for the flagship Superkarts! USA regional program. Another great turnout is expected for stop two of the season, set for March 4-5 at the Willow Springs International Raceway in Rosamond, California. The 6/10-mile course – set to run in the counter-clockwise direction – has been a regular stop for the 12-year series, and provides another great opportunity for the IAME and Honda drivers to continue their journey in the six-round points chase.

A perfect weekend in Round One has former two-time series champion Billy Musgrave back at the top of the 2Wild Karting S1 Pro Stock Moto standings. Musgrave has set the mark, and the rest of the S1 field will need to step up their game in Willow Springs. Jimmy McNeil and Jarred Campbell were the other podium finishers, and hold the top challenging positions in the point standings. The racing was exciting and unpredictable in the Phil Giebler Racing X30 Senior category. David Vasquez left Buttonwillow as the race winner and championship leader. However, the close competition throughout the day has five drivers within 25 points entering Willow Springs. Second-year drivers Phillippe Denes and Christian Brooks are second and third in the points despite missing the podium. Nick Ramirez finished third, and sits fourth in the standings, with runner-up finisher Matt Johnson holding fifth in the points, showing just how important every session is on track toward the championship.

A new crop of drivers have joined the Leading Edge Motorsport S2 Semi-Pro Stock Moto division for the 2016 season. Leading the charge after round one is 2015 SKUSA Pro Tour S5 Junior champion Callum Smith. The Senior rookie triumphed in the main event and holds the championship lead after this first round. S3 transfer Robert Heck Jr. sits second, with podium finishers Will Preston and Hunter Pickett trailing not too far behind. S5 graduates Jason Pettit and Hunter Kelly performed well over the weekend and are among the early championship contenders.

Trey Brown and Dante Yu were the standout drivers in the Ryan Perry Motorsport X30 Junior class at the opening round. Brown led from qualifying and through the two heat races before Yu climbed up for the main event win. The advantage goes to Brown in the standings, leading Yu by 30 points – with Thomas Mejia, Jagger Jones and Oliver Calvo all right there. Dominic Gorden came away from Buttonwillow as the winner and points leader in the PKS Professional Kart Support Mini Swift division. Gorden won both heat races and the main event to establish himself as the point leader. Defending series champ Anthony Willis finished second, and is tied for the second spot in the standings with top qualifier Jalen Mack. Jace Jones is fourth, just 50 points out of first. Things are tight in the new Top Kart USA Micro Swift category. Race winner Kailey Meris is the point leader after the opening round, with Kai Sorensen and Carson Kragh within 15 points. Cooper Hunt and Tuesday Calderwood are also in the early chase.

Another large turnout for the opening round in the Outsource Utility Contractor S3 Novice Stock Moto class, with Garrett McKelvie as the standout driver. McKelvie took the victory in Buttonwillow and leads the standings by 30 points over Julian van der Steur with Adrian Yong in third. Dean Heldt is the top driver in the RPG S5 Junior Stock Moto division over Ricco Shlaimoun after round one.

Registration is open for the second round of the California ProKart Challenge at Willow Springs. The deadline for online registration for this event is Tuesday, March 1 at midnight – offering the discounted price of $325 for entry and stamped race tires. Move-in for Round Two of the California PKC begins on Thursday, March 3. On Friday, the California PKC registration desk opens at 7:00am, with the official practice day beginning on track at 9:00am, running until 5:00pm. There are NO pit spot reservations required for this event, and onsite camping in the pits is FREE. Please see the website for the hours that the gates open and close each day. Willow Springs Raceway charges a gate fee of $10/person for this event and thus, California ProKart Challenge only requires an additional SKUSA pit pass to be purchased if you are a mechanic or crew member that requires access to the grid. Two host hotels have been selected for the weekend – with booking information, additional race and venue details, and a tentative weekend schedule posted at the California PKC Event Page.

Superkarts! USA would like to remind California PKC competitors that the spec fuel and oil is not provided by PKC. Please plan accordingly to pre-order from your local kart shop, or bring a sufficient supply of both for the weekend. Another reminder is drivers who competed at Round one can continue their path to qualify for the Priority Pre-Entry Program for the SKUSA SuperNationals XX by entering and competing at the first four California PKC races in 2016. Don’t forget to stick around after all the on-track activities have completed for the post-podium raffle drawings. Superkarts! USA handed out more than $3,000 in prizes at Buttonwillow, and the same is expected for Willow Springs.