Hot weekend of racing forecasted in the Copper State 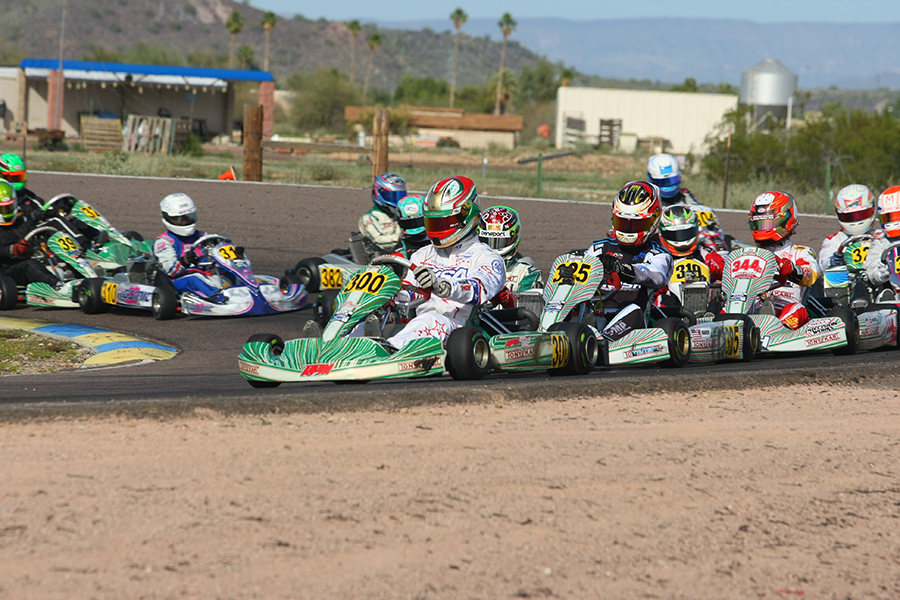 The 2016 Challenge of the Americas is set to continue this weekend as the series returns once again to the Phoenix Kart Racing Association in Glendale, Arizona. A perfect weekend of racing opened up the season in Tucson at the end of January, and now with three weeks off, the drivers and teams are traveling back to central Arizona and the challenging PKRA circuit.

The Phoenix Kart Racing Association ‘Formula K Raceway’ has been part of the Challenge of the Americas since 2009, hosting one weekend every year. The PKRA event has hosted the second stop for five straight years, and helps define just who will continue the battle for the series championships. At 7/10 of a mile, the layout provides everything with tight corners, fast sweepers, esses, a long straightaway and the famous ‘monza’ corner. The driver, the engine and of course the chassis need to be all working together in order to pull off fast and consistent lap times.

For three of the Challenge categories, the PKRA weekend is another step toward the Rotax Max Challenge Grand Finals. The champions in the Senior, Junior and Masters Max divisions will earn a spot at the October 16-22 event at the Circuito Internazionale di Napoli in Sarno, Italy near Naples. The ‘Olympics of Karting’ is the goal for all Rotax competitors around the globe, with the Challenge presenting tickets to the three championship drivers at the series finale in April.

For those who are unable to attend the Challenge of the Americas PKRA, eKartingNews.com will be providing their ‘Trackside Live’ coverage for a fourth straight season. Viewers can enjoy the live timing from the event provided by Race Monitor, while listening to voice of the Challenge – Rob Howden – as he give the play-by-play call of the action as it happens. The EKN Live program can be streamed to your laptop or computer, and on mobile devices all from one page – eKartingNews.com/live. Daily reports, forum and social media updates can be accessed through the EKN Event Page.

Below is a look at those in the hunt for the championship chases in all seven classes, as well as who may contend for podium finishes in Phoenix this weekend. 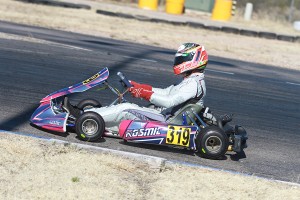 The Tucson weekend is a prime example of ‘anything can happen’ as it typically does in the Senior Max division at the Challenge. The championship in the last two seasons has been decided by six points COMBINED with Phillip Arscott and Luke Selliken claiming the championship. Rolison Performance Group is looking to make it four straight seasons with the class title, loading the tent with talent and holding the top five positions in the point standings. Leading the group after Tucson is Round One winner Jim McKinney (Kosmic). Among the veterans of the field, McKinney worked his way to the front by the end of the day, driving away to victory. The Arizona driver came one spot short of the podium on Sunday, earning enough points over the two days to land himself in the top position in the championship chase.

Leading the challengers are two Senior rookies – Kellen Ritter and Michael Michoff. Ritter (Kosmic) is coming off a solid Junior season last year at the Challenge, earning his first podium finishes and fighting for race wins. Kellen drove to second and third-place results in Tucson, making him the lead challenger. Michael Michoff (Kosmic) qualified for the Rotax Grand Finals through the Can-Am Karting Challenge, coming out with 12th place performance in his first visit to the world championships. He carried the momentum into the Senior ranks debut, finishing third in Round One and fifth on Sunday. Canadian Coltin McCaughan (Kosmic) was the runner-up in Round Two, and finds himself fourth in the standings ahead of fellow RPG driver Walker Hess (Komsic).

The wildcard thus far is Round Two winner Christian Brooks. The second-year Senior driver earned his second series victory following a disqualification the prior day due to an issue in the carburetor. Disqualifications have played into the Senior championship race the last two seasons, and could do so again in 2016. Brooks now finds himself 65 points out of the championship lead in the six position. A minimum of 21 points in which to cut into the advantage set by McKinney with a perfect score in each round is the goal. So for Brooks, the title is still within reach with plenty of racing left in the series. 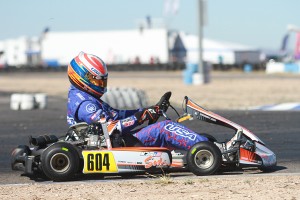 After all the on and off-track activities, Mike Jones holds the top spot in the Master Max standings (Photo: EKN)

There is no telling who is going to come out of this year’s Challenge with the title and ticket to the Rotax Grand Final in Masters Max. The Tucson weekend was dominated by Billy Cleavelin (Rolison Performance Group / Kosmic) until tech Sunday evening when an ‘out of spec’ reed cage was discovered. The disqualification was for the entire weekend, with the engine seal still intact from declarations prior to the opening round of competition. This essentially took the veteran out of the championship chase, however, Cleavelin is still going to be a favorite for victories as the series heads to Phoenix, where we have seen BC shine in the past.

The disqualification to Cleavelin handed both race wins and the championship lead to former series champion John Crow. Piloting a Full Throttle Karting / Birel ART machine to the runner-up in both main events, Crow left Tucson with two first place trophies. Recently, it was confirmed that Crow has elected to not compete in the familiar #651 for the remainder of the series, leaving the seat open and the championship chase up for grabs.

All this leaves Mike Jones (Dallas Karting Complex / Sodi Kart) as the championship leader over Canadian Christopher Patterson (Ruthless Karting / Exprit). Jones was the top qualifier in Round One until an electrical issues took him out of the Prefinal. The 2014 DD2 Masters Grand National champion bounced back with a runner-up finish in Round Two, making him the driver to beat going into Phoenix. Patterson was consistent throughout the weekend in Tucson, landing on the third step of the podium both days for his first at the Challenge. He trails Jones by just four points, making him the lead challenger for the top spot in the standings.

Former series champ Scott Falcone (Rolison Performance Group / Kosmic) and series newcomer Brian Taylor (Ruthless Karting / PCR) are among those still in the chase. Falcone landed P3 on Saturday in Tucson while Taylor notched his first top-five finish on Sunday. The wildcard on the weekend is defending series champion Paul Bonilla, who is scheduled to replace Crow in the #651. Bonilla won his third race of the season in Phoenix en route to the championship. 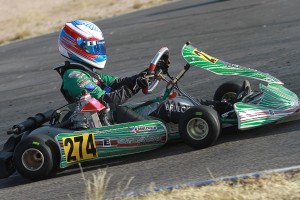 Texas driver Nick Brueckner (Orsolon Racing / Tony Kart) let it be known the championship is his to win or lose following the opening weekend in Tucson. After clinching the runner-up spot in the championship last season, the third-year Junior pilot is gunning to earn his first major title and trip to the Rotax Grand Finals. His point lead is at 42 markers with Zoey Edenholm (Koene USA / Tony Kart) and Matthew Taskinen (Rolison Performance Group / Kosmic) right there. The two drivers are separated by just one point heading into PKRA, with Edenholm recording three-straight podium finishes dating back to last year’s series finale. Each finished runner-up in Tucson, and will need to track down Brueckner over the two rounds in Phoenix. 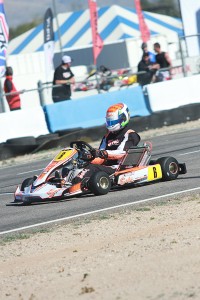 Jake French is the driver to beat in Shifter Senior (Photo: EKN)

Domination was defined by the performance of Jake French during the inaugural weekend for the Shifter Senior division in Tucson. The Dallas Karting Complex / Sodi Kart driver swept the weekend to earn maximum points in convincing fashion for all on-track sessions. The battle all weekend was for second, which ended up becoming Don Whittington (Pure Karting / Tony Kart) at the end of Sunday. The Florida pilot finished third Saturday and moved up one step on Sunday, now finding himself trailing in the standings by 60 points. Jacob Neal (VRP / Tony Kart) finished third on Sunday, promoting himself to the same position in the championship chase. The lead contender on Saturday was Kolton Griffin, with the Pure Karting / Tony Kart driver running second to French in the opening round. Contact at the start of the main event on Sunday took away the chance at challenging French and valuable points with a DNF. With a drop, there still is hope for a run as Griffin welcomes the drivers to his home track at PKRA. Harold Gottsacker IV (Champion Racing / Intrepid) and Hunter Pickett (Pickett Racing / Aluminos) both showed well in Tucson, and will be among the over 14 drivers battling for podium finishes in Phoenix. 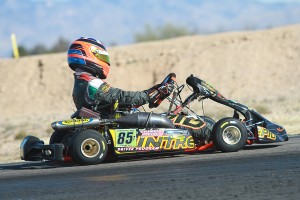 The debut of the Shifter Masters division at the Challenge was a two driver tango. Defending US Open champion Ryan Kinnear (Champion Racing / Intrepid) and Darren Elliott (Nash Motorsportz / CRG) went back and forth throughout the weekend, with Kinnear coming out on top. The Scottish-native who calls Texas home swept the opening round with Elliott unable to match the pace. The veteran bounced back Sunday to take qualifying and the Prefinal, only to get involved in an opening lap incident to drop him toward the back of the Senior/Master field. This gave Kinnear a clean path to a second victory and the championship lead, while Elliott fought back to second and scored one more point on the day then the championship leader. The gap is at 34 points heading into Phoenix with PKRA regular Nick Firestone (DR Kart) sitting there third in the standings. Colorado driver David Conyers (Energy Kart USA) will make his first series start, along with local driver Lonnie Hochstetler (Pure Karting / CRG). 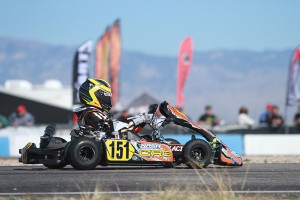 Marco Kacic is looking to extend his lead in Mini Max (Photo: EKN)

It was a near sweep for Canadian Marco Kacic (CRG Nordam) in Tucson, establishing himself as the top driver in the championship race 1/3 into the journey. Experience is always a key factor in the Mini Max division, with Kacic now into his third season in the category. His top challenger at the opening event was 2015 Micro Max champion Diego LaRoque. A six-race winner last season, LaRoque (Benik) stole the fast lap in the opening qualifying session, and challenge Kacic all weekend long to put himself 22 points out of the championship lead. Second-year Mini Max driver Austin Torgerson (Ruthless Karting / Tony Kart) ran third behind the top duo all weekend, positioning himself to make a run at the title with a solid Phoenix weekend. 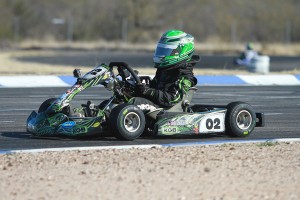 Ashton Torgerson is the top driver in Micro Max after the opening weekend in Tucson (Photo: EKN)

In the last three seasons, only three drivers have won in the Micro Max division at the Challenge of the Americas. Jak Crawford swept the 2014 season toward the championship while Diego LaRoque duplicated the feat in 2015 as the series champion. The 2016 season is beginning very similar, as Ashton Torgerson (Ruthless Karting / Tony Kart) dominated the proceedings in Tucson. He takes his perfect score in the championship chase with Carson Morgan (Benik) and Enzo Scionti (CRG Nordam) the leading challengers after placing second and third respectively in the first two rounds.