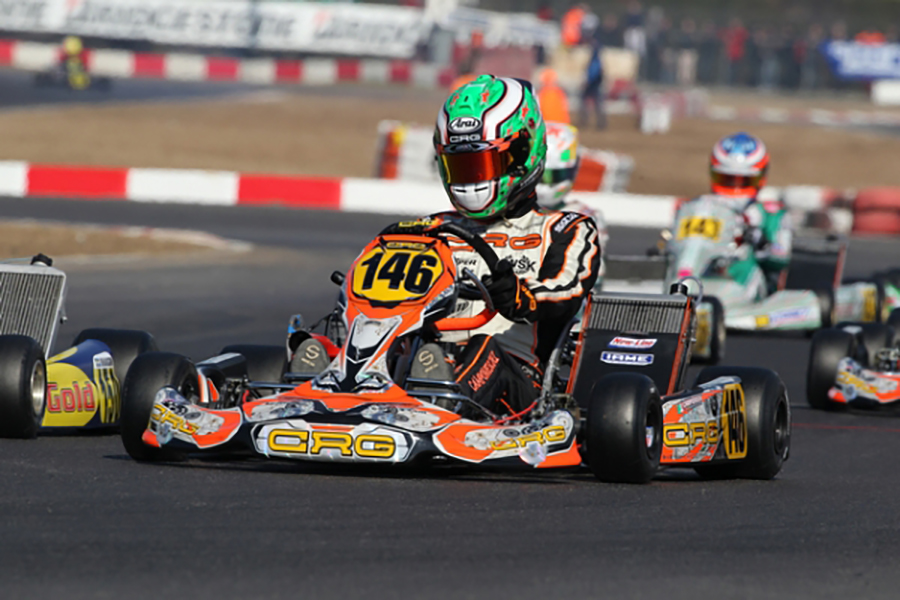 The 21st edition of the Winter Cup highlighted the speed of CRG drivers in all categories, but this time around they could not hit the big target for several reasons. Positive indications in Junior with Dennis Hauger showing a great growth and in Mini with the podium secured by Mallet and team Gamoto.

A great spectacle with 268 drivers on track enlivened the 21st edition of the Winter Cup at the South Garda Karting track of Lonato, where CRG works drivers have been protagonists in all categories, confirming the competitiveness of the technical package as well as that of all the drivers.

Alongside the due credit to all CRG Racing Team drivers, a pretty much welcomed confirmation came from the young Norwegian driver Dennis Hauger, who is in his debut year in Junior, after dominating the past two seasons of 60 Mini. At the second race in OK Junior in Lonato, Hauger turned out to be among the absolute protagonists of the series, being always among the front runners. Hauger managed to take the fifth place in the Final, confirming his speed after the great fifth place in his Prefinal.

A series of 10 seconds time penalties due to some racing contacts and some incidents spoiled the results of CRG drivers in KZ2 instead. Nevertheless, Paolo De Conto, Flavio Camponeschi, Simo Puhakka and Fabrizio Rosati, alongside the new entry from Macau, Andy Chang, showed great competitiveness throughout the weekend. The Final has been quite spectacular, but the classification did not do justice to CRG drivers competing in the Winter Cup. In the race won by Marco Ardigò, from Luca Corberi to Anthony Abbasse, the best of CRG drivers was the private driver Andrea Dalè, who pulled a sixth place. Simo Puhakka ended ninth, Fabian Federer with team SRP was eventually relegated to the eleventh place from the final P4. Giacomo Pollini of Renda Motorsport was 13th, Andy Chang 19th and Gerard Cebrian Ariza 21th. Flavio Camponeschi was also handed a 10 seconds penalty, while Paolo De Conto, Fabrizio Rosati and Enrico Prosperi had to retire due to an incident.

Some tough luck also hit CRG drivers competing in category OK. Following a series of misfortunes, like that happened to Pedro Hiltbrand at the start of the Prefinal, the pace shown in the Final by Hiltbrand, Felice Tiene and by the Finn Paavo Tonteri has really been remarkable. In the end, Hiltbrand has been the quickest, but he had to settle for P6 at the end of a great comeback, while Tiene and Tonteri closed respectively in P7 and P8, right in the slipstream of their team mate. The three CRG drivers will certainly be among the main protagonists of this season.

CRG colors made it to the podium of Mini Rok thanks to the French driver of Team Gamoto Evann Mallet. The very young French has been the main contender to the victory until the very last few meters, but he was overtaken at the last corner and crossed the line in P3. Mallet was later on promoted to the second place behind Pizzi, as the winner Coluccio was handed a 10 seconds penalty. Two of the main CRG drivers, namely Riccardo Camplese, also of Team Gamoto, and Federico Cecchi of Team Morsicani, had to retire due to an incident.

Dino Chiesa, team principal CRG: “We scored a great result with Dennis Hauger in category Junior. Despite coming from Mini and being at his second race in the higher category, he ended right at the feet of the podium. This is really promising. In OK we are still in an embryonic stage; we are working to improve and things are on and off, but these are still early days. The Winter Cup is a race of its kind and we also did some tests, that will be useful in the remainder of the season. We certainly need to work on some aspects for KZ2, but this is quite a peculiar race as it is the only one run on Bridgestone tyres. We might be more competitive on a type of rubber than on another, but I believe that serious stuff is going to come in a couple of races. The second race of WSK Super Series or the first round of the European Championship will show the real values on the field.”

All results are available at www.southgardakarting.it