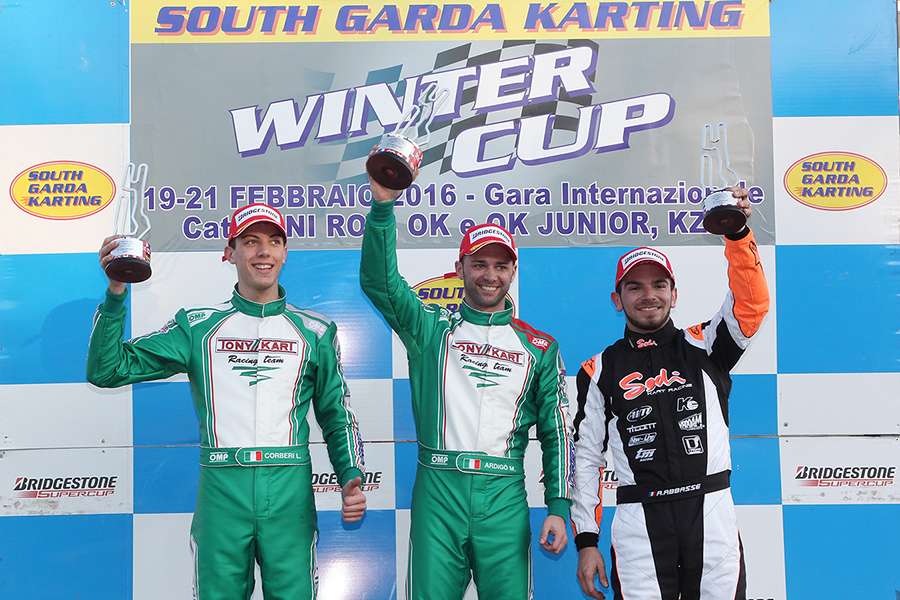 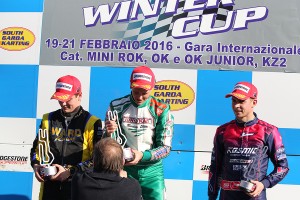 The 21st edition of the Winter Cup has lived a very exciting weekend with four spectacular finals. This has been the icing on the cake after a great start with the record number of entrants, 268 drivers from 36 different countries, and three days blessed with sun allowing every driver to show his speed and welcoming a lot of spectators.

Category KZ2 has offered a top class spectacle as the 34 finalists have been battling from lights to flag with several position exchanges on top. The race has been initially led by the Italian Marco Ardigò (Tony Kart-Vortex-Bridgestone), by the French Anthony Abbasse (Sodi-Tm-Bridgestone) then and finally by the young Italian Luca Corberi, who is Ardigò’s team mate and managed to complete a good comeback race from P8 leading the race for three laps. After slipping down in third place, Ardigò has been very quick in the closing two laps and managed to get back on top. The sprint to the line saw Ardigò closing three tenths clear of Corberi and five of Abbasse. This victory allowed Ardigò to secure his third success at the Winter Cup.

The Italian Fabian Federer, on CRG-Modena-Bridgestone, also fought for the podium, but the former European Champion had to settle for P4 before being handed a 10 seconds time penalty for the incorrect positioning of the front fairing due to a contact. The fourth place was therefore inherited by Gold’s driver from Sweden Joel Johansson, who led the two Italians Leonardo Lorandi (Tony Kart-Vortex-Bridgestone) and Andrea Dalè (CRG-Tm-Bridgestone). 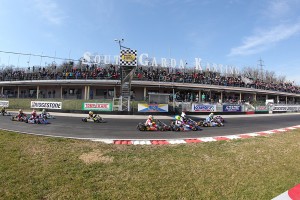 The Danish works driver of Tony Kart Nicklas Nielsen confirmed to be the quickest of OK after dominating heats and Prefinal. Nielsen managed therefore to secure his second consecutive Winter Cup in a row, thanks to a clear victory on the Italian Lorenzo Travisanutto (Tony Kart-Vortex-Bridgestone), who was followed by the Polish World Champion Karol Basz (Kosmic-Vortex-Bridgestone).

The victory of OK Junior went to the British driver of Team Ricky Flynn Fin Kenneally (FA Kart-Vortex-Bridgestone). The two Prefinals were won by his team mate, the French Timothy Peisselon and the Russian Ivan Shvetsov (Tony Kart-Vortex-Bridgestone). Second at the flag after a good battle, Shvetsov was later on handed a one position penalty that gave the second place to Peisselon.

All results are available at www.southgardakarting.it