Karting to be Part of 100th Running of Indianapolis 500

Purdue University has a long history with the sport of karting. The prestigious Purdue Grand Prix dates back to 1958, the event that has students building their own karts to compete against one another on the school’s own purpose-built race track. The event has developed into an annual tradition, featuring karts powered now by the Yamaha KT100 engine you see at tracks throughout the United States. Many of the former winners are members of the karting community, including 1970 winner Jim Fry of the United States Pro Kart Series staff and defending three-time winner Jimmy Simpson.

The Student Karting World Finals will take place May 17-18 inside the Indianapolis Motor Speedway (Photo: usackarting.com)

In 2010, the Purdue Electric Grand Prix was launched as part of the university’s electric vehicle initiative, established to educate and train the workforce needed to design, manufacture, and maintain advanced electric vehicles. They have partnered with the United States Auto Club (USAC) to develop the International evGrand Prix, held each year at the Indianapolis Motor Speedway.

“We began the program from a federal grant to train engineers to design and build electric vehicles,” stated Danny White, Director of Motorsports with Purdue University Office of Engagement. “The first race of the evGrand Prix was on the Purdue GP track and moved over to the Indianapolis Motor Speedway the following year. The concept was to develop an all-electric version of the Purdue Grand Prix, but to welcome other universities and students from around the world to participate as well. It has continued to improve each year, and the 2016 event will be amazing as we get to be part of the 100th Indianapolis 500 festivities.”

For the past five years, leading technical universities and colleges have gathered in the ‘Racing Capital of the World’ to compete against one another while also accelerating innovation through education with their commitment to developing future electronic vehicle technology. The winner is the team that best blends kart design, battery efficiency, community outreach and race placement in the 50-lap event.

The event will expand for 2016, offering up three different opportunities for students to compete at the Brickyard. Added this year is the National High School evGrand Prix, an exciting new venture for Purdue University and Indiana High Schools, as they bring their STEM education to life. Teams will field karts propelled by electric motors powered by lead-acid batteries with Indiana’s own Hoosier Racing Tires being set as the spec tire. 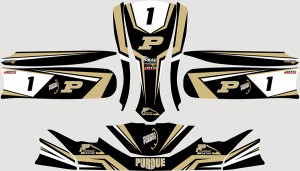 A third portion of the Student Karting World Finals is the National Collegiate Karting Gas Grand Prix. The concept is to attract some of the best students, open to all colleges and universities, to compete against one another in spec kart packages to determine the best in the nation.  The spec racing vehicle will be the Margay Racing Products Ignite K3 spec chassis with the Briggs & Stratton LO206 engine package and Hoosier Racing Tires.  Schools can purchase the entire package under $4,000.  The overall idea is to provide another component for the event that will provide flat-out school versus school competition in current-day performance karting equipment.

The event is contested over two days during the most famous month of motorsports as it celebrates the 100th edition of the Indianapolis 500. From May 17-18, the parking lot inside of the IMS facility just north of the pagoda will host students from colleges, universities and high schools fielding their electric powered karts as the top drivers from around the world prepare for qualifying to the Indy 500. The high school portion will compete on May 17, along with the International evGrand Prix and Gas Grand Prix taking part in their practice and qualifying sessions. The main events are scheduled to take place on May 18 from 1:30pm to 3:30pm.

Looking at the event three months away, the International evGrand Prix is expecting to welcome 20 to 25 karts from around the world. One entry from England and two from the University of Windsor in Canada will join Purdue University, Ivy Tech College, Southern Polytech, Oklahoma University, Northwest Illinois and others to compete for the international title. The High School evGrand Prix is looking promising with five schools already committed and another half dozen more interested to exceed the goal of 10 karts competing.

As the momentum continues on the electric side of the event, promoters are calling all students to be part of the National Collegiate Karting Gas Grand Prix. The event is open to any school and any current student. As we saw at the Rock Island Grand Prix, the Margay Ignite program is gaining momentum and now students of all majors with a ‘gearhead’ mentality can enjoy a chance of a lifetime by racing inside the Brickyard during the 100th running of the Indianapolis. Students, colleges and universities interested in the program can visit usackarting.com and follow the Student Karting World Finals on Facebook.