Right the First One: CRG Wins the Rotax DD2 in Valencia 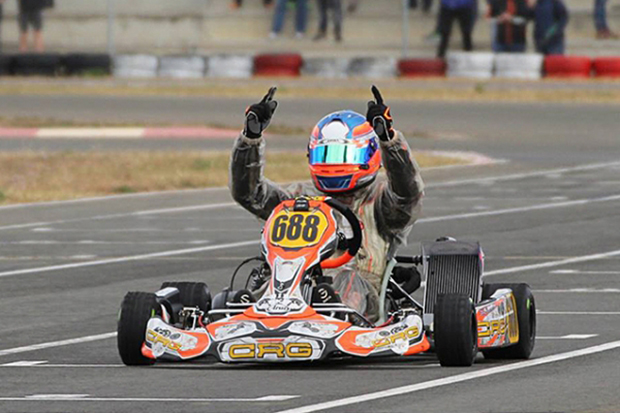 Spectacular win for Ed Brand and CRG in DD2 at Valencia’s Winter Cup, that was the first Rotax round in Europe. Podium rounded up by the Polish driver Slawomir Muranski. Tough luck in Senior and Junior for the other CRG drivers. The next rounds of Rotax. CRG secured a fair and square victory in category DD2 with the British driver Ed Brand in the Winter Cup of Valencia, the season opener of Rotax Europe. Brand dominated qualifying and then claimed the victory of the Final after a good comeback race.

Ed Brand’s superiority in DD2 at the Winter Cup of Valencia has been sharp since the beginning, as CRG drivers led by Martin Reuvers claimed the virtual podium of qualifying with poleman Ed Brand followed by his Spanish team mates Oriol Dalmau Caballero at 0.158s and Cristobal Garcia at 0.270s.

Ed Brand confirmed his speed in qualifying heats, when he secured the second place, leading Oriol Dalmau Caballero. The Spanish driver of CRG took the win in DD2’s Prefinal instead, while Brand was relegated to the final P13 due to an incident. His prompt recovery took place in the Final though, as Ed Brand managed to get all the positions back, installing himself on the lead with two laps to go before taking a solid victory.

The DD2 podium was rounded up for CRG by the Polish driver Slawomir Muranski of team Wyrzykowski, who also completed an excellent comeback up to the final third place. Oriol Dalmau Caballero was 12th after winning the Prefinal and Cristobal Garcia 15th due to a penalty.

The best of CRG’s lot of Senior was the Spanish driver Lluc Ibanez who ended his effort in 13th, the German Christopher Dreyspring was 16th, the Israeli Ido Cohen 20th, while the other Spaniard Mauricio van Der Laan was 24th.

In Junior, the German Phil Doerr had to settle for P19, while the Spanish driver Kilian Meyer ended 24th due to a 10s time penalty after a promising 10th place in Prefinal.

The next rounds of Rotax are the second round of the Florida Winter Tour in Ocala Grand Prix on February 21st and the third round of FWT in Palm Beach on March 20th.

The Rotax Euro Challenge will kick off on April 3rd in Genk (Belgium). The series will then resume from Castelletto (Italy) on May 15th, before heading to Zuera (Spain) on July 24th and to Salbris (France) on August 28th. The Adria Karting Raceway (Italy) will house the only round of the Rotax International Open on October 9th. The Rotax Grand Finals will also take place in Italy on October 21st at the International Circuit Napoli of Sarno.