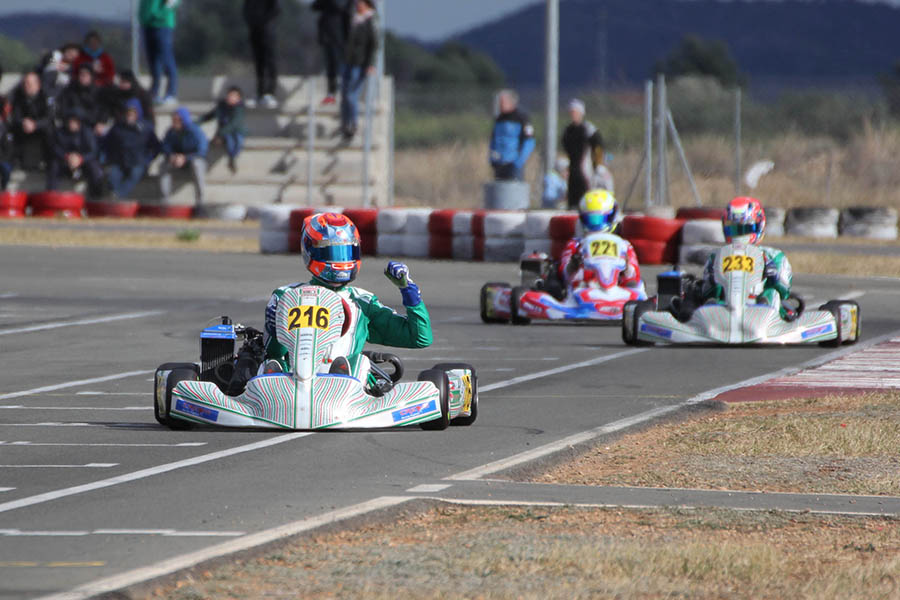 Today the Kartódromo Internacional Lucas Guerrero at Valencia set the scene for the final day of the 2016 ROTAX Winter Cup – the seventh edition run by the RGMMC Group. Although sunshine mostly made for nice conditions, the storm kept blowing infinitely, putting the drivers’ and mechanics’ skills to the limit. In the end Adam Smalley (juniors), Nicolas Schoell (seniors), Edward Brand (DD2) and Slawomir Muranski (DD2 Masters) stood up to the storm and their opponents likewise, taking the victory in their categories. 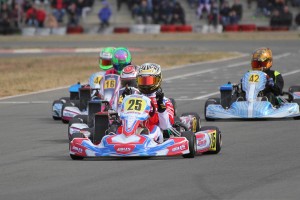 Axel Charpentier (Strawberry Racing) was the man to be beaten in the junior prefinal. But the Tony Kart driver showed hardly any weakness. He controlled the field including a group of up to ten serious chasers over the most part of the race distance. He always was able to counterattack some short changes of the lead, which is why Charpentier finally won by a whisker of only 0.020 seconds ahead of his teammate Mark Kimber (Strawberry Racing), Tom Canning (KR Sport), Carlos Saval Martin (Binakart) and Laszlo Toth (Daems Racing Team) from Italy. Olli Caldwell (KR Sport) and Joe Phillips (KR Sport) who belonged to the circle of favourites, too, were involved in a collision which cost both of them a promising result.

In the final Axel Charpentier set the pace again. Together with Tom Canning (KR Sport) the two youngsters managed to pull away from their chasers. When they ended their ceasefire – since Canning took the lead for some laps – the chasers caught up and suddenly almost the entire field was snatching for the top again. In a breath taking final spurt positions kept changing, accompanied by some smaller crashes in the pack. In the last lap the decision concentrated only on Axel Charpentier and Mark Kimber. They headed towards the last chicane, when Charpentier defended his line. Equally Kimber cut the track and crossed the line first. Consequently he was given a penalty which threw him back to 16th place. Axel Charpentier did not win, either. He was penalized for a bad manoeuvre and ended up in 17th place. Finally it was Adam Smalley (Coles Racing) inheriting the victory ahead of Tom Canning, Laszlo Toth, Carlos Saval Martin, Frenchman Antoine Perceval (Daems Racing Team) and Dutchman Daan Willemse (Team TKP). 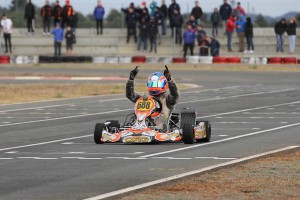 Tom Gamble (Strawberry Racing) managed the best start for the senior prefinal. But his lead was not supposed to last long since he dropped back consistently and ended up on the seventh place. Equally Nicolas Schoell (Strawberry Racing), Berkay Besler (Bouvin Power) and Jonathan Hoggard (KR Sport) were the ones setting the pace. The three drivers headed away from the rest of the grid and arranged the victory between themselves. After a tight and nerve-racking fight, Schoell defended the win closely ahead of Besler and Hoggard. Fourth place went to Glenn Van Parijs (Bouvin Power) from Belgium, while Josh White (Coles Racing) completed the top five.

In the final Nicolas Schoell was a class of his own. After a perfect start he pulled away from the grid and gained quite a big leading gap. Throughout the race distance the Austrian was able to maintain that advantage and kept his chasers out of his slipstream. In the end, he won the final ahead of Josh White and Tom Gamble, who both had tried hard to catch up to the leader, finally being rewarded with the podium places. Jonathan Hoggard finished fourth ahead of the reigning Euro Challenge junior champion Jack McCarthy from the UK.

In the DD2 prefinal the favourites fell like dominoes. At first it was Edward Brand (CRG SPA) who had a bad start and was involved in a collision, pushing him back to the end of the grid. Finally he caught up some positions but ended the race in 14th place only. On top pole setter Kevin Ludi (Spirit Racing) was in charge for a long time but then the triple heat winner visibly lost performance which made him drop back to sixth place in the end. A flawless drive was shown by Caballero Dalmau (CRG SPA). The local hero took the lead by halftime and defended it up to the finish line ahead of the flying Finn Ville Viiliainen (Heikki Vaisanen) who had picked up the race from eleventh place only. In third position Gerard Cebrian Ariza (Jose Peraza Sampedro) finished the prefinal by a strong final spurt pushing Dzianis Slavinski (Uniq Racing Team) and Constantin Schoell (Daems Racing) to the chasers role. Best Masters driver was Martin Pierce (Uniq Racing Team) who made his way up to a remarkable eighth place in the grid. 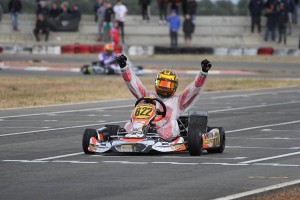 A rain shower made for new conditions for the DD2 final. And indeed the ranking shuffled dramatically. Prefinal winner Caballero Dalmau took the lead at first, but could not defend it at all being pushed back to 13th place in the end. On the other hand, Ville Viiliainen took to the slippery conditions like a duck to water. He headed away from the grid metre by metre and already looked like the save race winner. Yet he did not reckon with Edward Brand. The CRG driver was the quickest man on track and made his way back to the top. Close to the end he passed Viiliainen and celebrated the victory ahead of the Finn. Third place went to Slawomir Muranski (Wyrzykowski Motorsport) who equally was the best Masters driver in the end. Kevin Ludi and Gerard Cebrian Ariza complemented the top five of the final classification.

Having crowned the 2016 ROTAX Winter Cup champions, one already got a foretaste of what is to come next: from 28th of March to 3rd of April the ROTAX MAX Euro Challenge will hold its 2016 opening event in Belgium. At Genk the RGMMC Group will head into the 13th year of organizing the ROTAX Euro Challenge and everyone is invited to join. More information regarding reports, photos, results and live TV stream are available on the official websites www.rotaxmaxeurochallenge.com or www.telemundi.com.