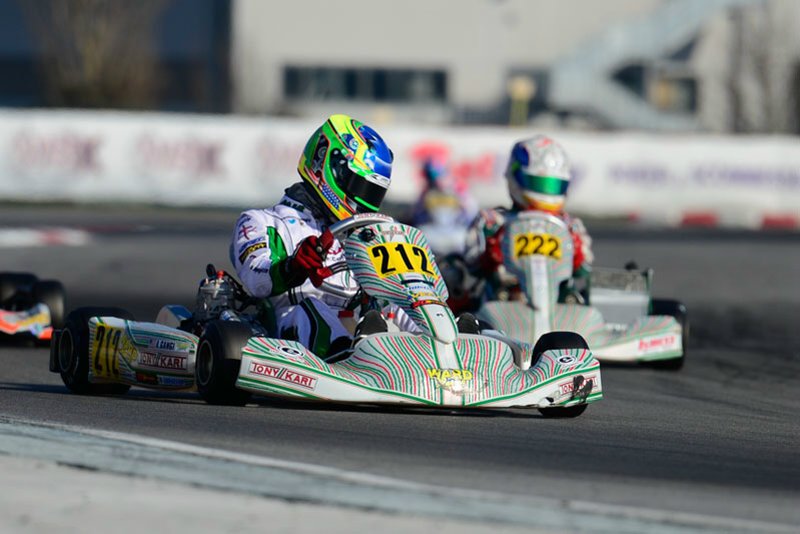 Making some huge changes for his 2016 campaign, American karting standout Anthony Gangi Jr. wrapped up his senior class debut at the first race of his full European schedule this past weekend. Taking on the new OK class at the WSK Champions Cup at the Adria International Raceway in Northern Italy, the Tony Kart pilot impressed all in his first European event of the 2016 season.

“I am really excited to compete against and learn from the best drivers in the world; factory drivers who are getting paid and even drivers that have been competing longer than I have been alive,” explained Anthony Gangi Jr. “This past race was really challenging as I was not able to test the new engine and tires until my first race. This added a lot of pressure to learn the motor, both because of it being a direct drive system and the driver needing to adjust the carburetor while driving. The other challenge is the new CIK front fairing design, which is designed to push in following any impact, costing the driver a ten second penalty. Although this is a great change, it challenges you in making sure your spacing and position with your competitors is always on your mind.”

Working with Sweden-based Ward Racing with Matsuura Masanori as mechanic, this powerful combination of knowledge and talent put Gangi Jr. in position to battle with the world’s best. Plagued with a stuck power valve in qualifying, and ranked 35th overall, Gangi Jr. would have to make up ground in his two heat races. Moving up to 18th in Heat B vs C, the rising talent only mustered 26th in Heat A vs B after leaning the carburetor out too much. Classified 35th overall after heat points were tabulated, the Brookville, New York resident found himself in Prefinal A in his shot to make the WSK OK main.

With the top 17 drivers from each prefinal transferring to the final, Gangi Jr. comfortably raced his way to the weekend’s premier event, placing eighth after the 16-lap Prefinal A. The multi-time karting champ then wrapped up a strong debut performance with an 11th place on track result overall in the final. During the race and battling wet conditions, Gangi Jr. went off track and hit a speed barrier. This would result in a post-race penalty for his front fairing being in an incorrect position, adding ten seconds to his overall time putting him back to 17th.

“I have to thank my driver coach and mechanic Matsu for all the help, as well as everyone at Ward Racing,” concluded Gangi Jr.

Up next for Anthony Gangi Jr. is the 21st Winter Cup at the South Garda Karting facility in Lonato, Italy February 17-21.