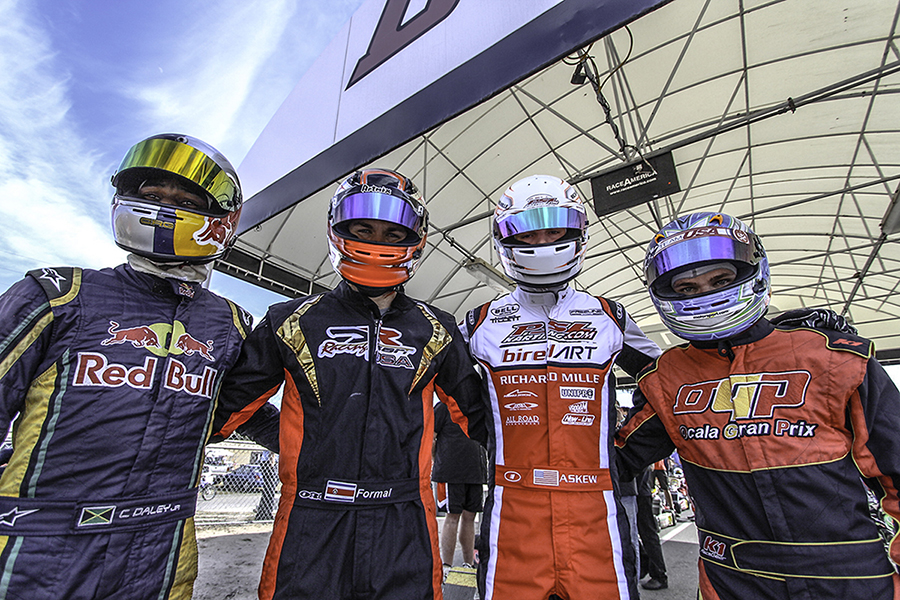 Coming off from a stellar prefinal win, Anthony Honeywell looked to repeat his strong performance for the final Masters ROK race of the weekend. As the green flag dropped, Honeywell opened up a sizable gap between himself and Adam Pettit, but a determined Pettit would slowly close the gap on Honeywell. Ultimately, Pettit ran out of laps, as he paced the quickest of the Masters drivers but failed to catch the consistent Honeywell.

Senior ROK was a comfortable Sunday cruise for Ocala Gran Prix driver Kyle Kirkwood, as he dominated the field and swept the entire weekend. Meanwhile, the intense action in the battle for second place kept things entertaining, as Alain Sisdeli and Ryan Norberg engaged in an intense battle. Sisdeli and Norberg fought hard in the final laps but Sisdeli crossed the line in second, with Norberg in third. A post race penalty would see Sisdeli lose his podium spot through a two-position penalty.

The Mini ROK prefinal set the stage for an exciting conclusion to the Mini ROK weekend. With a three-way drag race to the finish line in the prefinal, Matheus Morgatto was determined to win the final. After numerous false starts, Morgatto and Tyler Maxson were moved back a row into the third and fourth starting positions. This minor delay didn’t faze Morgatto however, as the young Brazillian driver under Zanella Racing dominated the final with a huge margin between himself and the rest of the field. The tight battle for second was another display of talent from the Mini ROK drivers, as Jason Welage held off Reece Gold to take the second place position by a mere tenth of a second difference.

The fastest ROK class present this weekend featured Florida Winter Tour veteran Danny Formal redeeming him after losing out on a near sweep in the first round. Starting in second behind Oliver Askew, Formal got the jump on the green flag over Askew and settled into a phenomenal victory on his DR chassis. Ocala Gran Prix driver Austin Garrison finished in the second position with Askew placing in third.

For Shifter Masters, Scott Davidson was the big winner aboard his Birel/ART chassis under PSL Karting. Davidson was calm and in control as he commanded the Masters drivers, scoring the fastest lap in the process.

Micro ROK featured some highly impressive racing that kept the crowd on edge as the drivers battled for the lead. BENIK driver Oliver Denny started the prefinal in first position but fell back to fifth on the tenth lap. Denny then charged his way back to the top of the podium with a stellar drive from the young driver. Connor Zilisch and Freddie Slater completed the rest of the podium.

The Junior ROK final was an intense race as numerous drivers tangled to try and find some speed. The immense speed and teamwork by the d’Orlando brothers was nullified as both were involved in incidents on the track. Nicholas d’Orlando experienced mechanical issues from contact on the third lap of the race, retiring him early. Michael d’Orlando was involved in an exciting battle for the podium but contact with several drivers sent him and Ryan MacDermid spinning into the barriers. By the end, it was Ocala Gran Prix driver Mathias Ramirez’s sheer speed and ability to stay out of trouble that scored him the win, with teammate Tyler Gonzalez and Gabriel Patrule completing a Tony Kart podium sweep.

Full results can be found at MAXSpeedEntertainment.com. Racing returns to the Ocala Gran Prix with the Rotax MAX Challenge portion of the 2016 Sofina Foods Florida Winter Tour, with qualifying kicking off official action Friday, February 19. Catch all the action live at http://bit.ly/1mDVTsQ and at Motorsport.com.