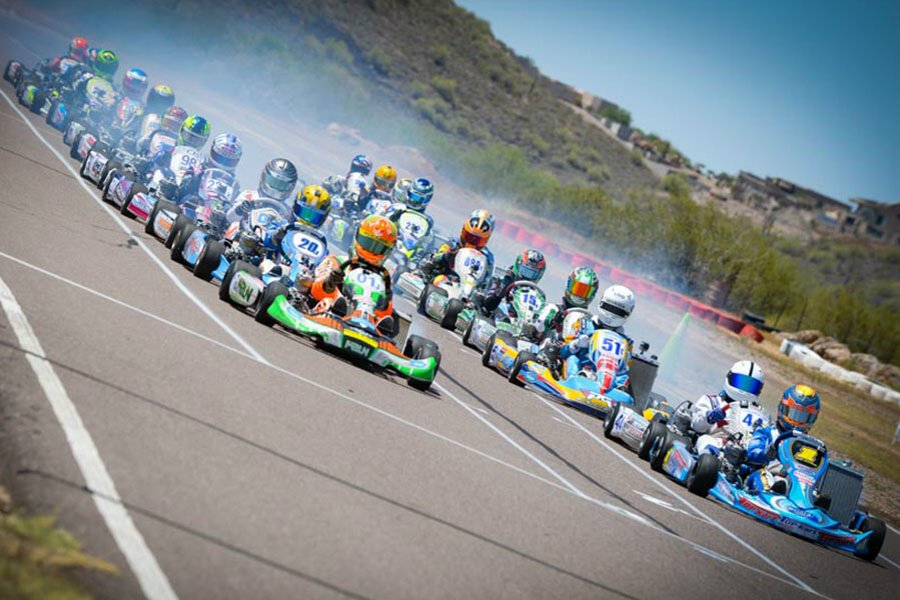 The Superkarts! USA staff could not have asked for a better launch to the 2016 season than what they received this past weekend when over 200 drivers invaded Buttonwillow Raceway Park for the opening round of the California ProKart Challenge. The evolution to the X30 powerplant is complete, and the IAME fields were strong with a staggering 30 drivers in Master, 28 in Junior and 22 in Senior. The addition of the new Micro Swift class reset the first step on the IAME ladder with 19 pilots, while Mini Swift boasted a stellar 34 drivers.  The second season of S4 Super Master attracted a good field of drivers as well, all excited to extend their competition onto the SKUSA Pro Tour when the class will make its official national debut.

While the California PKC will run its second and third race before the opening round of the 2016 SKUSA Pro Tour, plans are well underway for the SpringNationals, which will make its return to the Phoenix Kart Racing Association facility in Glendale on April 29-May 1.  The PKRA venue has played host to several national events for SKUSA, dating back to the first-ever ProMoto Tour event in 1999.  The track offers several optional configurations, and SKUSA will be releasing the confirmed competition layout before March 29.

“We’ve developed a great relationship with the PKRA family, so I’m excited to visit the track soon and then throw out ideas on the layout and the direction of our configuration for the SpringNationals,” offered Tom Kutscher, Superkarts! USA President. “We flip-flopped the SuperNats last fall and went in the counter-clockwise direction for the first time in 18 years, and I’m leaning that way for Phoenix as well.  We held the Pro Tour opener there last year and it’s intriguing, because there are ways to change things up.  We’ll make sure we release the layout at least 30 days before the event, but it’s cool to have options.”

In an effort to limit the expense requirements for the Pro Tour, Superkarts! USA will also be taking into consideration the positive feedback that was received from the optional Thursday practice session that was offered at the SummerNationals last year in New Castle.  SKUSA understands that there are costs attached to pre-event testing in the form of travel, lodging and days off work, so for both the SpringNationals in Phoenix and the SummerNationals in New Castle, they will offer an optional open practice on the Thursday before each Pro Tour event. The goal is to provide enough track time for visiting drivers so that expensive pre-event testing can be skipped.

SKUSA will manage the open practice on Thursday and the track will be under the control of the full line-up of series corner works, with full medical staff on-site as it will be throughout the competition days of the event.

At this time, SKUSA would like to remind its ProKart Challenge drivers (California, Texas, and Can-Am) of the importance of their participation to become eligible for the SuperNationals Priority Pre-Entry Program (PPEP).  Drivers who run all scheduled regional PKC events before the program deadline will be provided with the first opportunity to enter the 20th running of SKUSA’s headline event, well before the remainder of the karting community (deadline dates TBA).  With the split of both the Micro and Mini Swift classes, as well as the S4 Master and S4 Super Master categories into their own unique 44-driver caps for the race, the PPEP may very well be the only way drivers will be able to enter the Vegas event.  All of the IAME classes are expected to sell out well before the 2016 running of the SuperNationals. The PPEP program details, including the deadline dates and registration schedule, will be released at a later time.