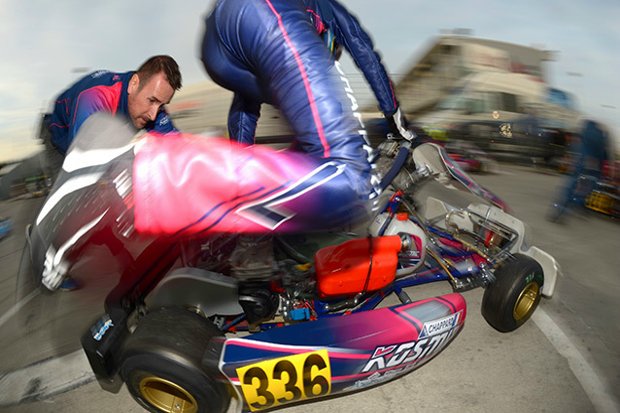 From 4th to 7th February 2016 at the Adria Raceway Karting (ITA), the WSK Champions Cup hosted the first international Competition of the new OK and OK-Junior categories on the circuit that will host a European Championship Competition in June. Satisfaction was in good supply when the time to sum up arrived.

The first positive point is the popularity of this opening event organised by WSK Promotion. The competitors were present in numbers despite a very early date: 38 Drivers in OK and 67 Drivers in OK-Junior were on track at Adria, significantly larger numbers than the previous events for KF and KF-Junior.

Whether on a dry track or in the rain, no particular safety problems were encountered at the entrance to the track during the starting procedures or during racing.

The Qualifying Heats and Finals were praised for their intensity and fairness. Spectacular battles, plentiful overtaking, a few skirmishes, is what was observed. The new engines bring notably increased performance in OK, in the range of 5/10 per lap at Adria, with a more measured but perceptible evolution in OK-Junior. A last comment is that the four engine brands represented at Adria (Vortex, Parilla, TM Racing and LKE) appeared to be very close in performance.

Here are some testimonies collected during the Competition at Adria.

Alessandro Ferrari, Race Director at the WSK Champions Cup
“I admit I felt a little apprehensive for the emergence of the new OK engines in WSK. From the starts early on, I realised it was a success. Everything went well regarding safety, including for Juniors, which was crucial. I systematically gave two practice laps for Drivers to regroup, but they still need to make progress on this. Otherwise, we witnessed some very competitive and fair races. Penalties for front spoilers were not very common in the dry. I am convinced of the success of the OK generation.”

Dennis Hauger, age 12, Norwegian, former 60 Mini Driver and OK-Junior rookie, CRG-Parilla
“I love the OK-Junior. I did some tests in KF-Junior and I feel that the new category is faster. I have not tried to start my own kart, but I intend to prepare myself soon. The hardest thing for me is to get used to the intensity of the struggle in Junior, the machine is not a problem, anything but!”

Gianni Palmieri, Vice-World Champion in Formula C in 1997, European Champion in Formula Super A in 1999, professional mechanic for 15 years.
“The OK resembles in many respects the old 100cc, they are real racing engines, but with reliability worthy of our era. The kart is lighter, the front brakes are gone, performance has increased, it is a very good thing. For us, mechanics, the work is easier and it should normally be cheaper for customers. I’m glad that everything worked well for the first race. The push start is not a real problem, it’s only a matter of habit. We will have to look after our physical fitness too!”

Tom Joyner, World Champion in KF in 2013
“This first experience racing the OK engine was quite satisfactory. The different running with prototypes over the course of last season had not impressed me. Now that the engines are in their final configuration, it is something else. We can take advantage of the removal of the front brakes and the decreased weight. The kart is really efficient and very quick. It is a delight to drive. We still need to work to understand the intricacies of these new engines, but I’m sure in a few weeks we will be in focus.”

Ralf Schumacher, Team KSM
“We are very pleased with the first races in OK and OK-Junior. The Winterpokal at Kerpen was a successful test shot as both drivers did well, but we were mainly present to show the potential of the new engines and support their rapid implementation. To start with, everything has gone well. The starting of the engine poses no particular problems, except perhaps when pushing on the track for some, and the performance is already there waiting. As we have seen at Adria, the parc fermé and the track entrance need to be adjusted accordingly. The progress of these first races should reassure the skeptics.“