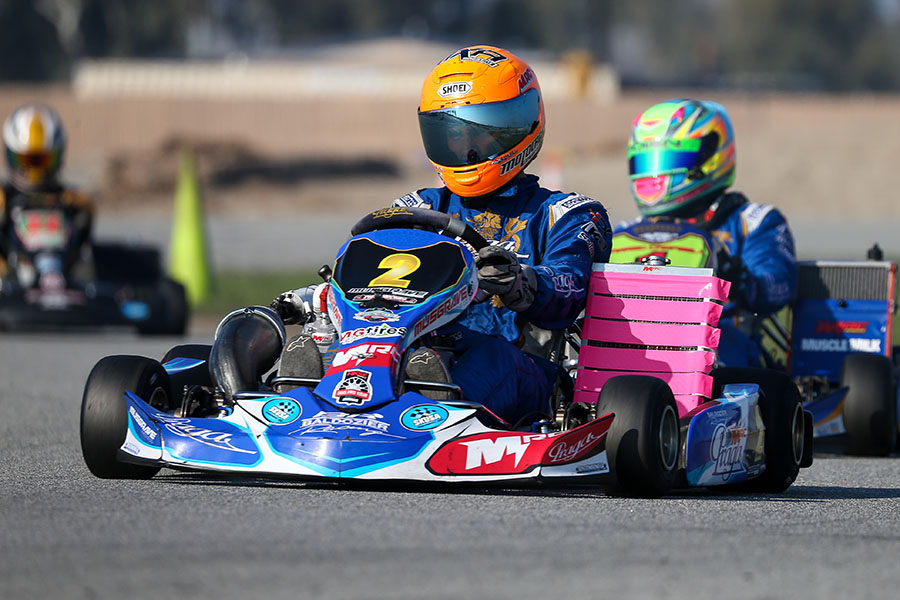 A record-breaking event to open up the 12th season of the California ProKart Challenge took place on February 5-6 at the Buttonwillow Raceway Park. Two hundred drivers gathered at the Buttonwillow, California facility to open up the six-round championship chase for the Superkarts! USA regional event, matching up the best drivers along the western half of North America against one another in 11 categories. A number of new faces took part in the event, featuring a handful of new race winners and former series champions returning to the top of the podium. 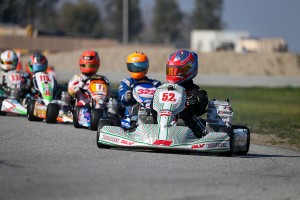 Billy Musgrave saw his championship streak come to an end last year after earning two titles in 2013 and 2014. The mission to return to the top began with a sweep of the 2Wild Karting S1 Pro Stock Moto division at the season opener. Musgrave stomped the 10-driver field in qualifying with a 47.312-second lap, besting them by over three tenths of a second. Defending series champion Jarred Campbell closed the gap in the opening heat race, trailing Musgrave by only three tenths at the checkered. In Heat #2, it was former S4 champion Jimmy McNeil sliding past Campbell for the second spot on the final circuit to finish runner-up to Musgrave. The wick was turned up in the main event, as Musgrave led all 15 laps to pull away to a 5.6-second advantage at the checkered flag. McNeil held off Campbell for the second spot, with former series champ Jacob Neal finishing in fourth and S1 rookie Christian Brooks fifth.

A sweep was broken up in the 24-kart Phil Giebler Racing X30 Senior category with David Vasquez earning his first series victory. Second-year Senior driver Phillippe Denes set the pace throughout much of the day. Denes edged out defending series champ Christian Brooks by 61 thousandths of a second in qualifying with a 48.798-lap time. The two went back and forth in Heat #1 with Denes earning the win, and leading all eight laps for the Heat #2 win. Vasquez hung around in the top-five until moving his way forward in the main event. Both Vasquez and former series champ Matt Johnson put the pressure on Denes. On the final lap, Vasquez secured the top spot in a wild finish to reach the checkered flag first. Johnson held off Nick Ramirez as the two made contact in the final few hundred feet to the finish line. Brooks ran to fourth with Denes falling down to fifth on the last circuit. 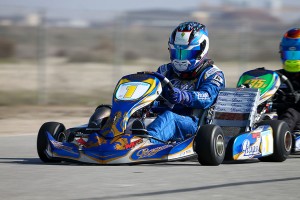 The Leading Edge Motorsport S2 Semi-Pro Stock Moto division is welcoming a number of graduates from the S3 and S5 ranks in 2016, helping the class to grow to 18 drivers for the opening round, with many of them reaching the front of the field throughout the day. S5 graduate Jason Pettit bested the field in qualifying, finishing the session second overall with the S1 Pro field. The majority of the S1 field worked past Pettit in the opening heat race, including S5 graduate Hunter Kelly who took the race win in class. S3 transfer Robert Heck Jr. took his turn at the point, leading the class at the checkered flag in Heat #2. The main event, however, belonged to 2015 S5 Junior Pro Tour champion Callum Smith. He assumed the lead on lap five, and continued on to the checkered flag for the victory in his S2 debut. Will Preston advanced up to second over Hunter Pickett with Heck and Pettit completing the top five.

It was a record turnout for the Vemme Kart X30 Master class, with 30 drivers all chasing veteran Mike Rolison. Making his series debut, Rolison opened up with fast time in qualifying posting a 50.309-second lap. John Crow got the jump at the green flag to begin Heat #1, but Rolison drove back to win by over two seconds and then led all eight laps of Heat #2. Rolison kept himself at the front of the field throughout the 15-lap Final, stretching out to a 4.3-second advantage for the victory. The fight for second went down to the wire, with Tim Meyer able to best Crow, with Brian Phillipsen and last year’s opening round winner Carlos Calderon in fourth and fifth. 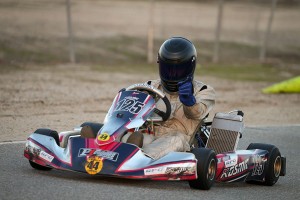 All three Master categories were swept on the weekend, with series champions Darren Elliott and Ken Schilling earning victories. Elliott led the 11-driver field all day in the Nash Motorsportz S4 Master Stock Moto division from qualifying, through the two heat races and every lap in the main event. On the rear bumper was Rob Logan throughout the day, with Alan Michel third in his S4 debut. Robert Marks and Trevor McAlister completed the top five. Schilling began his title defense in the Mike Manning Karting S4 Super Master class with a sweep at Buttonwillow over a nine-kart field. Darrell Tunnell and Todd Scholta joined him on the podium.

Trey Brown appeared to have the momentum in his favor for the Ryan Perry Motorsport X30 Junior victory. Brown was the quickest driver of the 28 registered drivers in qualifying with a 49.175-second lap. He fought off Jagger Jones in Heat #1 and led all eight laps in Heat #2 ahead of a charging Dante Yu. At the drop of the green, Yu was able to pull away as the rest of the field fought for the second position, earning his first series victory. Brown came away with the second position ahead of Junior rookie Ryan Schartau and Jones, with Tomas Mejia fifth in his Junior debut.

Garrett McKelvie became a first time winner in the 15-driver Outsource Utility Contractor S3 Novice Stock Moto class. The third-place finisher in the championship chase last year was quickest in qualifying but lost the opening heat race to Adrian Yong. McKelvie fought back for the win in Heat #2 and led all 15 laps in the Final. Julian van der Steur was second, with Morghan Loganathan third in his Stock Moto debut. Dean Heldt was the top driver in the Rolison Performance Group S5 Junior Stock Moto division. Ricco Shlaimoun won Heat #2, with Heldt winning all the other on-track sessions including the main event. 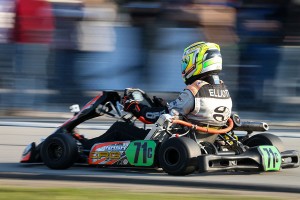 Defending S4 Master champion Darren Elliott began where he left off, on top of the podium (Photo: DromoPhotos.com)

The PKS Professional Kart Support Mini Swift category is shaping up to be one of the most competitive classes of the California ProKart Challenge and among the biggest, with 34 young drivers taking the green flag this weekend. Three drivers qualified within eight hundredths of a second, with Jalen Mack earning fast time ahead of Dominic Gorden and defending series champion Anthony Willis. Gorden took the Heat #1 win with a final lap maneuver, then led all six laps of Heat #2. Leading all 11 laps of the main event, Gorden was able to get away and cruise to a 2.481-second victory for his first in the series. Willis held off Mack at the line for second, with Jace Jones and Colin Queen right there.

Nineteen drivers came out to Buttonwillow for the debut of the Top Kart USA Micro Swift division, with Kailey Meris becoming the inaugural winner. Cooper Hicks began the day as the top qualifier, only to have Kai Sorensen and Carson Kragh win the two heat races. Meris came from row two at the start of the Final to take the lead on the opening circuit, where she remained for the 11 laps to earn the victory. Sorensen finished a close second, with Kragh in third. Cooper Hunt and Tuesday Calderwood rounded out the top five.

Superkarts! USA went crazy at the podium raffle, giving away three entries to Round Two of the California ProKart Challenge, four sets of Evinco race tires, and two free entry packages (including entry, fuel, oil and race tires) to the SKUSA SpringNationals on April 29-May 1 at PKRA in Arizona. All valued more than $3,000. 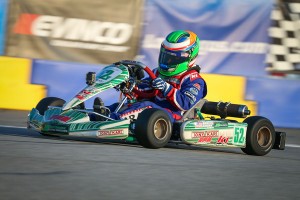 The championship continues on for the California ProKart Challenge next month as racers will travel to the Willow Springs International Raceway in Rosamond, California on March 4-5. More details for this event will be posted shortly. For more info on anything related to Superkarts! USA, please visit the website – www.superkartsusa.com and be sure to follow the Superkarts! USA Facebook page and Twitter account – or call the SKUSA head office at 951-491-0808.