From Last to First for Nicolaou in Dubbo 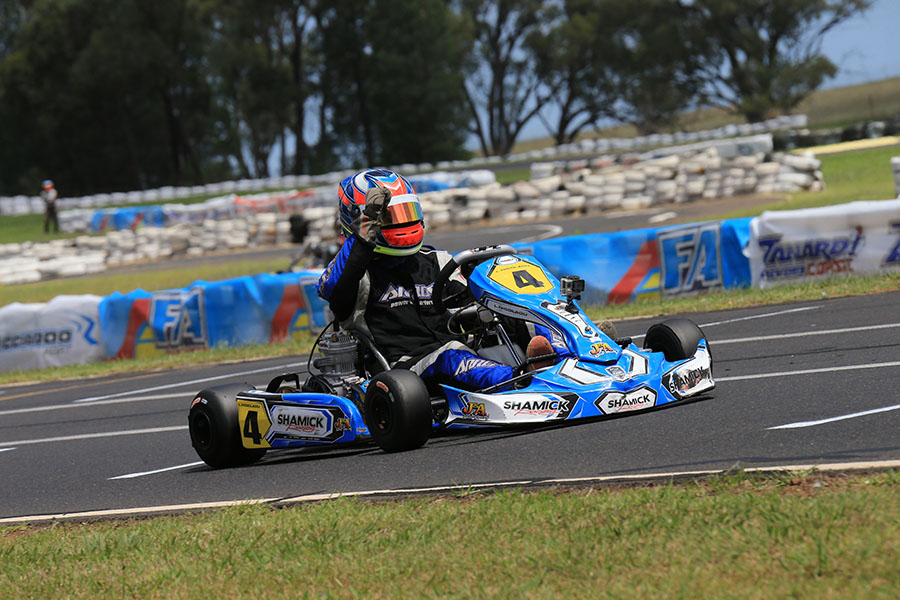 Shamick Racing’s Leigh Nicolaou was the story of the weekend’s opening round of the Australian Kart Championship, presented by Jayco and Castrol EDGE staging a last to first blitzkrieg around the Dubbo Karting Circuit.

Difficulty during the heat racing forced the Victorian from the rear of grid of the final and within the first couple of laps he’d advanced from 30th to halfway through the field. After five laps and Nicolaou broached the top 10 it delivered belief into his camp that he could perhaps chase a podium.

That became a belief of a win when he was lapping six tenths faster than the leading five karts and then pushed his way forward eventually taking the lead with two laps left to go. Whilst all eyes were on Nicolaou, Australian Champion Daniel Rochford and Morgan Feast were having a terrific battle up front unawares of the charge coming from behind. Feast had got to the lead only to see the #4 range up on him and then deny what would have been a certain victory.

Making a return to the top step of the KZ2 Australian Championship podium was Gold Coaster Chris Hays. The new BirelART driver was the beneficiary of an early race move from David Sera. South Aussie Daniel Price led the race early whilst Sera had to charge from third. He made a deep move at the second last turn and tapped Price, which dropped Price to third and pushed Sera back to ninth.

That opened the door for Hays to sweep to the lead. Price didn’t give up though and setup a thrilling final stanza where the unheralded GP Karts driver pushed the former Aussie Champ right to the finish, just two tenths separating the pair at the end.

Former Kiwi Champion, Ryan Grant fired his way forward to finish third on track in his MadCroc after a somewhat quiet weekend by his own lofty standards due to mechanical issues early in the weekend.

CompKart driver, Harrison Hoey took his maid KA2 Championship win in dramatic fashion. He had the pace from the final heat race that he also took out and he didn’t look like being headed. He crossed the line 3.2 seconds in front of Lachlan Hughes, however Hughes received a time penalty for a startline infringement, which elevated Jack Winter up to second – a terrific result for the Sydneysider – and meant Victorian, Angelo Mouzouris collected a podium on debut in the category.

Reece Sidebottom (Kosmic) continued his form of Saturday to win the KA1 Final by some 1.3 seconds. Dutchman, Marijn Kremers kept him honest for much of the race before falling into the clutches of Scott Sorensen. No matter what the HDR Arrow pilot did he couldn’t get past the Ricciardo Kart driver and settled for third.

In the battle of the Shamick Racing CRG’s in Cadet 12, it fell the way of Kai Allen. The Lifestyle-supported driver took the win after an immense battle with James Wharton. The pair swapped the lead at various stages of the 16 lap finale. In the end Allen was able to position his kart to get in front of Wharton on the final lap and had enough of a gap to record a 0.379 second win.

South Aussie Blake Purdie brought his Nippy’s Fruit Juices Zanardi Kart up to a terrific third.  After qualifying 18th, Purdie had to work hard across the five races passing a total of 67 karts before making his way onto the podium.

Jamroc Racing’s Travis Worton took his first AKC victory in KA4 Junior after being undefeated since the first heat yesterday. Perhaps his easiest victory came in the final when he came home 2.7 seconds in front of Oscar Priest. Priest had been embroiled in a battle with third placed man Broc Feeney and Jay Hanson. Benito Montalbano led the race early on but dropped back to fifth in his PCR.

In TaG 125, Brendan Nelson (FA Kart) opened his 2016 account in the best possible fashion with a five second victory over Joshua Car (CompKart). Car had to come from 11th on the grid and was able to leapfrog Mitchell Hewitt for the second podium position. 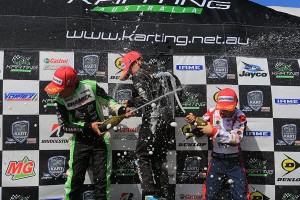 The champagne flowed on the Cadet 12 podium (Pic: Coopers Photography)

Local Dubbo Kart Club drivers Joseph Tighe and Dean O’Brien recorded the KA3 Senior quinella with less than a second separating the pair at the end of 20 laps. Matt McLean put together a great race to come home third, whilst female racer Beck Connell finished in fourth position after a great weekend.

The rampage of Emerald (Qld) racer Carter Mobbs in the Cadet 9 class was clear – winning every race in comfortable fashion. The battle for second was a cracker between Ben Holliday and Toby Dvorak.

The next round of the Championship will be conducted March 25-27 at Hume International Raceway, Puckapunyal. 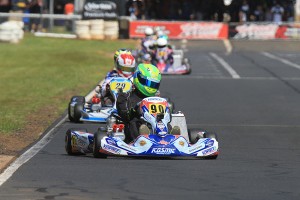