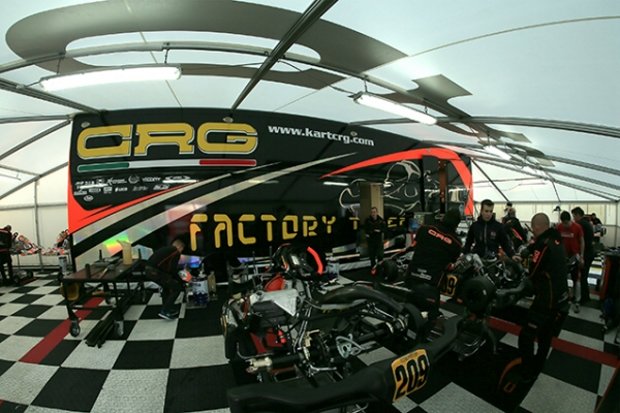 CRG will line up a good number of drivers in all categories at the opening of WSK races in Adria during the weekend of 7th February. The KZ World Champion Jorrit Pex and the Vice-Champion Paolo De Conto will be on track, as the new European Champion Flavio Camponeschi, who is set to make his debut with CRG in OK.

CRG Racing Team is about to partake in its first official exit of 2016 in occasion of the WSK Champions Cup – the first international appointment of the season – that will take place in Adria at the Adria Karting Raceway (Rovigo, Italy) on the weekend of the 7th February.

This is going to be an important moment for CRG, that will use this chance to check all the potential the team has to express in the remaining of the season. This new campaign is going to be characterized in fact by a lot of novelties for the works team, both on the technical side and on the drivers lineup, that is one of the most competitive in the world with some new entries among the fields of CRG.

The KZ World Champion Jorrit Pex will be defending CRG colors in KZ and will be assisted by his team Pex Racing Team. In Adria, he will be at the wheel of the CRG Road Rebel chassis. An interesting challenge will also involve his team mate Paolo De Conto, on CRG-Maxter, who has been the other great protagonist, alongside the same Jorrit Pex, in last year’s Final of the World Championship held in Le Mans. Paolo De Conto will compete on the new Maxter MXS-2 engine with the assistance of Renda Motorsport.

The other CRG drivers of KZ confirmed for season 2016 will not be present in Adria, as Simo Puhakka, Fuma Horio and Fabrizio Rosati will complete CRG lineup starting from the Winter Cup of Lonato on February 21st.

FLAVIO CAMPONESCHI TO DEBUT WITH CRG IN “OK”

A lot of attention in the new international OK category will be focused on the KZ European reigning Champion Flavio Camponeschi, who will be at his first official race with CRG. Flavio Camponeschi will also alternate in KZ races during the season.

In Adria, CRG will also field the 2012 World Cup winner of KF2 Felice Tiene in OK, alongside two new arrivals, the Finnish driver Paavo Tonteri and the Spaniard Xavier Lloveras, all on CRG-Parilla. The British driver and KF 2014 World Champion Tom Joyner will also be present on Zanardi-Parilla.

In this occasion, the Spanish Pedro Hiltbrand will not be present instead, as he is currently busy in the United States. Hiltbrand will kick off his season with CRG in the Winter Cup.

The young and promising Norwegian driver Dennis Hauger, on CRG-Parilla, will be defending CRG colors in the other new category, the OK Junior. He will be at the debut in this higher category after the success obtained in 60 Mini. In 2015, Hauger obtained a splendid poker of victories in 60 Mini with team Gamoto securing WSK Super Master Series, WSK Winter Trophy, WSK Champions Cup and WSK Gold Cup.

CRG works team will have some new drivers that will strengthen even further the potential of the squad.

A LOT OF CRG DRIVERS IN PRIVATE TEAMS

In category OK, team CRG Keijzer Racing will be present in Adria fielding the Dutch drivers Dennis Kramp and Alexander Gaal, alongside the Israeli driver Ido Cohen, who comes from the Challenge Euro Rotax.

CRG Holland will line up the Dutch Max Tubben and the German Phil Hill in OK Junior. A good number of drivers on CRG chassis will also compete in 60 Mini.

All results and Live Timing service will be available at www.wsk.it